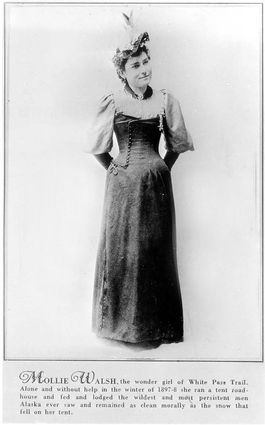 A caption below this archival photo reads, "Mollie Walsh, the wonder girl of White Pass Trail. Alone and without help in the winter of 1897-8 she ran a tent roadhouse and fed and lodged the wildest and most persistent men Alaska ever saw and remained as clean morally as the snow that fell on her tent."

Mollie Walsh made a name for herself among the prospectors who flooded north during the Klondike Gold Rush. Her "grub tent" was a welcome sight to many miners who climbed the White Pass Trail in the late 1890s. One man carried such affection for her that he created a memorial that still stands today in the little town of Skagway.

Born Mary Walsh in 1872, the Irish lass had packed her bags and headed north from Montana in 1897. Various sources say she was a dancehall girl in Butte, worked for an Irish linen manufacturer or was a stenographer.

Regardless of her past profession, the redheaded girl became a waitress at a restaurant in Skagway and spent much of her time fundraising for Presbyterian minister Rev. Dicky, who was building the first church in town. She soon became the darling of Skagway, singing hymns in the church and becoming a star member of the "Muffet and Crumpet Society," according to Sam Holloway, writer for the Yukoner Magazine.

Her kind heart was evident when her close friend, a prostitute, turned ill. Walsh risked scandal by sitting by the girl's bedside, and when her friend died, she asked the pastor to hold services.

Dicky gave a heartfelt speech to those at the funeral and urged the young women to quit their dark profession. A sea captain in attendance was so moved that he offered free transport to any girl who wanted out of "the life."

Several girls took the captain up on his offer and boarded the SS Shamrock that night. Tucked securely in their pockets was money raised by Walsh to help them start fresh somewhere else.

Walsh wanted a fresh start, too. Skagway was becoming dangerous, as one prospector noted.

"I have stumbled upon a few tough corners of the globe during my wanderings beyond the outposts of civilization, but I think the most outrageously lawless quarter I ever struck was Skagway."

Walsh left town and headed up the White Pass Trail toward Lake Bennett. At the top of the pass, near the North West Mounted Police post at Log Cabin, she set up a tent restaurant.

"She operated a very primitive eating place with only a small sheet-iron stove and a narrow lunch counter in front of it," a stampeder later said. "The eats weren't anything special, but the girl's hearty enthusiasm, quick wit, and a dusting of freckles made her a favorite with all who stopped there."

One of the many men who beat a path to her tent was a respectable packer named Jack Newman. He fell hard for the Angel of the Klondike.

But her heart went to another – she married Mike Bartlett in 1898 and had a son two years later. The couple's troubled marriage ended in violence in Seattle in 1902, however, when a drunken Bartlett followed his wife into an alley and shot her dead.

Walsh's story might have been lost for the ages were it not for the love that never died inside packer Jack Newman's heart. Newman commissioned a statue to be placed in Skagway that would memorialize her. The bust, created by artist James A. Wehn in 1930, stands in a park named for Walsh and reads:

"Alone, without help, this courageous girl ran a grub tent near Log Cabin during the Gold Rush of 1897-1898. She fed and lodged the wildest gold-crazed men. Generations shall surely know this inspiring spirit. Murdered Oct. 27, 1902."