The old west is closer than you think 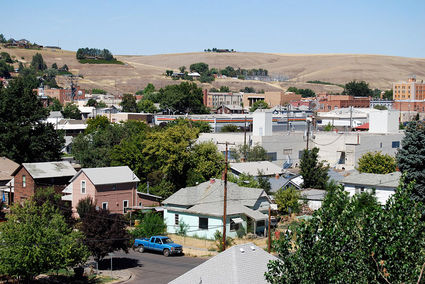 The city of Pendleton, Ore., above, is nestled in the rolling hills of the Columbia Valley.

Driving across Oregon's Columbia Valley on my way to see a friend in Pendleton, I kept looking at the green cuts in the hills indicating verdant vineyards. But approaching Pendleton, I was struck by the notion that I was no longer in the Pacific Northwest, but the Hill Country of Texas. I kept looking for tumbleweeds to roll across the road. Really, the terrain is just not what Alaskans would expect from a close neighbor.

But Pendleton has many more surprises for visitors.

With the large number of sheep farmers in the area, it was only natural for wool to have become a part of the local economy. Once a wool scouring plant, the Pendleton Mill was turned into a textile mill in the mid-1800s, but failed.

In 1909, the Bishop family, which still owns it today, updated the mill to greater efficiency and modern standards. At first, it produced the iconic Native American art design wool blankets that were used for everything from clothing to bedding to articles of trade to traditional ceremonies. Initially offered to the local Umatilla, Cayuse and Walla Walla tribes, which make up the Confederated Tribes of the Umatilla Indian Reservation, they soon became a ubiquitous part of frontier life.

During the World War II years, the company produced blankets, uniforms and clothing for U.S. troops.

Post-war, it delved into men's clothing, designing the popular Pendleton shirt, also an essential part of a mountain man's gear.

Oddly enough, the rock 'n roll band of the 1960s, The Pendletones, were responsible for making the shirt popular with young people. And that band eventually changed its name to The Beach Boys. Certainly an odd choice of dress for Californians, but a great boost to business.

Members of the Confederated Tribes of the Umatilla Indian Reservation, who live eight miles east of the city, raise a tribal village for the Round-up of more than 300 teepees.

On Interstate 84, the Confederated Tribes of the Umatilla Indian Reservation has developed a casino and conference center, the Wildhorse Casino Resort. Its 200-room hotel has four food and beverage eateries, a fine dining restaurant, sports bar, coffee shop, and a 24-hour restaurant to keep up your stamina for 24-hour gambling.

In 2006, this reservation faced what many Alaska villages have dealt with: whether or not to go wet. The Wildhorse Sports Bar is wet and serves drinks, something that was a hotly contested move in 2006.

The resort supports close to 3,000 tribal members with services and scholarships and provides jobs to 1,000 members and non-members, along with the tribes' software development company, Cayuse Technologies.

The Tamástslikt Cultural Institute, located on the resort grounds, includes permanent and rotating exhibits on the history and culture of the confederation's three tribes.

The Pacific Northwest was not immune to the West's sundown laws that required people of color to be off the streets by sundown, and in Pendleton, that meant under the ground.

Today you can take a tour of the underground city of the 1800s that not only housed the Chinese railroad workers, but also offered a laundry, butchery shop, ice cream parlor, and an opium den, its walls still black from the poppy fumes with the sweet smell still in the air.

The bunkroom, with blankets on the beds and straw hats hanging on the bedposts, is a chilling reminder of the racism the Chinese faced after their labor was no longer needed to build the transcontinental link from Portland, Ore., to the East Coast.

The Chinese Exclusion Act of 1882 passed by Congress and signed by President Chester A. Arthur, set a 10-year moratorium on Chinese labor immigration. It was the first time that federal law restricted immigration based on ethnicity under the guise of protecting the "good order" of communities.

The 90-minute tour is only $15, and includes several other sites, like the Cozy Rooms. Visit http://www.pendletonundergroundtours.org for more information.

It is said that prostitutes have a heart of gold, and Madame Stella Darby must have had one because a statue was erected in her honor outside of her business, The Cozy Rooms, which she ran from 1928 until she retired in 1967. It would seem the city softened its opinion of her decades after she shut down.

A poster of warning for young women and how not to become embroiled in the service business is displayed prominently.

The rooms are cozy, still decorated with souvenirs and clothing as if the occupant had just gone out for a while, maybe for an ice cream in the underground parlor. 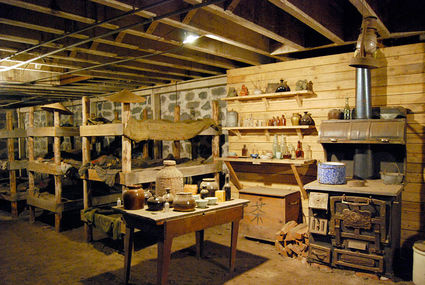 A tour of the Pendleton Underground takes visitors to former quarters of Chinese workers, who were forced to be off the streets by sundown.

This building is more solidly made than the old brothels of Alaska with its small cribs heated by a wood stove, or the cheek-to-jowel rooms above a saloon made from wood found on a beach and insulated with layers of wallpaper or newspaper.

It is a sobering look at the "oldest profession."

Of the 18 brothels that used to operate in Pendleton, the Working Girls Hotel is one where you can spend the night. It is also operated by Pendleton Underground Tours, http://www.pendletonundergroundtours.org/main/hotel.htm.

So Pendleton has everything an old time Wild West town would have: cowboys, Native Americans, gambling, prostitution, and restrictive laws for foreigners.

I have to say I was disconcerted by my visit there. Its history is one I would hope we as a nation have moved beyond.

After all, this is the 21st century.