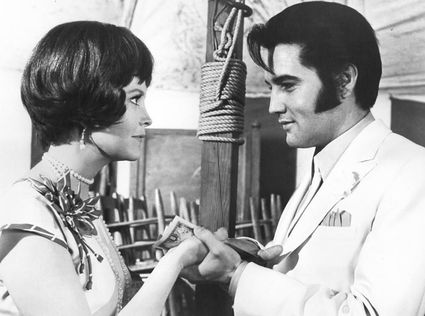 Marlyn Mason and Elvis in "The Trouble With Girls."

For many, the title "King of Rock and Roll" is reserved for one man: Elvis Presley. Had he lived, the King would have celebrated his 80th birthday on Jan. 8, 2015.

Unlike most departed singers who are remembered largely for their music, Elvis lives on through a phenomenal number of appearances in scripted motion pictures – 31 in all – beginning with "Love Me Tender" in 1956 and ending 13 years later with "Change of Habit" in 1969. His movies provide a unique glimpse into another dimension of one the twentieth century's greatest entertainers.

Although his films were often dismissed due to weak and predictable scripts, critics generally regarded Elvis as a surprisingly good actor. But what did costars think about working with Elvis?

"My mom and dad took me to see 'Blue Hawaii' when I was just a little girl and I fell in love with him right then and there," said Donna. "I used to listen to his records and I couldn't get enough Elvis."

Donna recalls filming her first scene on the cliffs of Makapuu, on Oahu.

"I had to run up into his Elvis's arms and call out 'Uncle Rick, Uncle Rick.' But I had only met him a few minutes before that. So when the director called 'action,' I ran up and got in his arms and his face was about 4 inches from my face. After all the anticipation of meeting Elvis Presley and working with him, I just froze. I couldn't believe I was so close to this beautiful man! All the crew cracked up because they knew I was so enamored. In fact, Elvis laughed the hardest – he just loved to laugh."

Unlike Donna, 7-year-old Susan Olsen wasn't an Elvis fan when she briefly appeared in the talent contest audition scene in Elvis's second to last film, "The Trouble with Girls" (1969).

"I couldn't understand all the hype over him and I didn't even think he was good-looking!" said Susan, who went on to play youngest daughter Cindy on the popular '60s TV show, "The Brady Bunch."

That changed after their first brief encounter.

"I remember that a bunch of the kids' mothers suddenly started screaming. Elvis had come out of his dressing room and they crowded around him for autographs. So I thought 'What the heck! I'll get one too.' So I went up to him – and I'm not making this up – when he looked at me I thought, 'Oh, I get it! I see why they like him so much.' He had this special aura about him. I was just dumbstruck, I couldn't say anything. He signed the photo, handed it to me, and said 'Here ya go darling.'"

Elvis's leading lady in "The Trouble with Girls" came away with more than just an autograph. Marlyn Mason snagged an on-screen kiss.

"It was a comedy kiss," said Marlyn, indicating that the only fireworks were the real ones in the movie scene.

She took an unusual approach to get the required reaction from Elvis. Just after the fireworks scene, Elvis comes up behind her and starts rubbing her shoulders.

"I just turned around, off camera, and started undoing Elvis's belt and trousers!" Marlyn recalled. "Well, I didn't get very far because it wasn't a long scene. Elvis got this funny look on his face, which you can see in the film. He was great fun to work with, because I could throw anything at him and he'd just throw it right back."

She also recalls a private moment when Elvis shared thoughts about his acting.

"The saddest thing Elvis said to me was 'I'd like to make one good film because I know people in this town laugh at me.' I'll never forget that," she said. "But he was always down to earth and comfortable with himself. Some of that dialogue was so corny, but he managed to bring a realness to it. And I think that's just how he was in real life. He was a natural comedian, and his timing was just impeccable. I just found him to be a very genuine person."

Despite his fame, Will Hutchins says Elvis didn't play the celebrity although he was usually accompanied on most of his films by pals – the so-called Memphis Mafia.

"On the set, Elvis was like a host – a Southern gentleman – making sure everyone was having a good time," said Will, who first worked in "Spinout" (1966).

The following year he costarred with Elvis in "Clambake," which featured a lot of ad-libbing and fooling around on the set.

"It was more-or-less a defacto stag party because Elvis was getting married soon after the filming was finished," recalled Will. "Elvis and his buddies would set off firecrackers. It was pretty wild, but a lot of fun. For the director's birthday, they had a cake and pushed it right in his face." 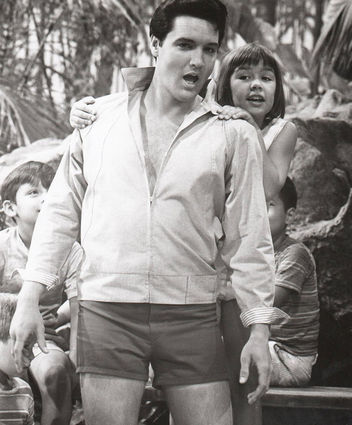 "We rehearsed for about two weeks," said Wilda. "Elvis was in and out of rehearsal hall every so often between his other busy filming days for the other scenes. He knew his material and music well, and I grew to admire him a great deal. It's amazing, through the years, how many people know about me and Little Egypt from that film. Oddly enough, I really didn't know much about Elvis before we worked together, but I found him to be a lovely, darling person, and I was just pleased to be a small part of his life."

With each passing decade since his death in 1977 at age 42, the Elvis legend and legacy continue to grow. When viewed in the context of the often zany '60s TV and film period, it is gratifying that there exists such an extensive film library of the most celebrated entertainer in history.