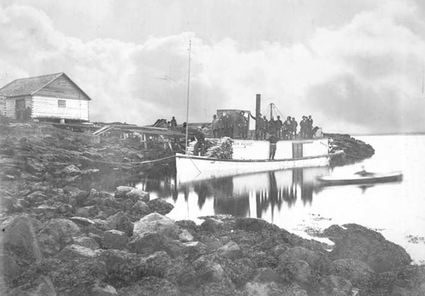 Three early pioneers bought the New Racket, seen here leaving St. Michael, and turned it into a supply boat on the Yukon River.

Some courageous pioneers saw the possibilities of the Yukon Basin years before the Klondike Gold Rush. And a few stand out above the rest, including Leroy Napoleon "Jack" McQuesten, Alfred Mayo and Arthur Harper. Had they not seen the need to establish supply centers, it is possible that gold rushes to the Yukon and Alaska would not have boomed during the late 1890s.

These men met up in British Columbia in 1873 and continued on to Fort Yukon together. The first winter, Harper went prospecting along the White River where Natives had found copper. McQuesten and Mayo, a small man and former circus acrobat, had gone down the Yukon to the mouth of Beaver Creek. They found some fine gold, but nothing worthwhile. The men joined forces again and spent the next 10 years trapping and trading furs.

The three partners bought Ed Schieffelin's New Racket, a small sternwheeler. Mayo ran the boat while McQuesten ran trading posts and Harper prospected. Once they had satisfied themselves that the Yukon was gold bearing, the men realized that their most important task was to establish a reliable source of supply for future prospectors. The strings of posts they set up along the Yukon, their grubstaking others and providing advice where to prospect, and the credit they extended helped many prospectors.

All three pioneers took Native wives, who were partners in the true sense of the word. Harper, however, was determined that his children should have advantages in the outside world and sent them south to be educated. His daughter, Margaret Harper Burke, wrote to Aunt Phil in 1954.

"I am the last of Arthur Harper's children – six boys and two girls. We all, except Walter (who became the first person to summit Denali in 1913), left Alaska in 1897 on the old Dora and were raised in San Francisco and other peninsula towns by strangers. Father died in November of that year in Arizona...."

When McQuesten retired, he took his wife to California where they had a big home in Berkeley. When he died, she managed his estate and became head of the family.

Likeable, easy-going Mayo went into partnership with the Alaska Commercial Company in 1894, at Rampart, the village with which his name is associated. Later he ran the Hotel Florence, which he advertised as "the only first-class house, $1.50 a night, furnished, stables for dogs and horses." He is said to be one of the main characters in Rex Beach's book "The Barrier." The name Mayo is still prominent today along the Yukon from Tanana to Eagle.

Harper, the square-faced Irishman with shrewd eyes, died the year after the Klondike discovery with little to show for his sacrifices and toil. But McQuesten and Mayo lived long enough to see the great developments they had prophesied and worked for come true.

None of the grand old pioneers shared in the great riches that were discovered, but they were rich in respect and fellowship from their brother pioneers who realized that these men had opened up the way for the great gold stampede of 1897-1898. As Kitchener wrote in Flag Over Alaska, "Their sign was a beacon in the wilderness."

This column features tidbits found among the writings of the late Alaska historian, Phyllis Downing Carlson. Her niece, Laurel Downing Bill, is turning many of Carlson's stories into a series of books titled "Aunt Phil's Trunk." Volumes 1-4 are available at bookstores and gift shops throughout Alaska, as well as online at http://www.auntphilstrunk.com. Bill also shares tidbits of Alaska's history on Facebook at http://www.Facebook.com/LaurelBillAuthor.