By Alice Salzman
For Senior Voice 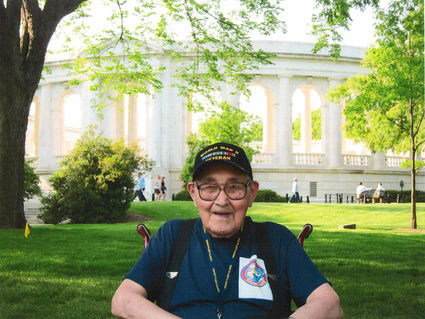 The Last Frontier Honor Flight is a local chapter of the national organization of the Honor Flight Network. Our mission is to honor and thank veterans – especially World War II, Alaska Territorial Guard and Korean War veterans – by bringing them to Washington D.C. at no cost to them.

The Last Frontier Honor Flight has been privileged to do this for 77 veterans since October 2013. Each one of these veterans came home with a renewed spirit knowing that they have not been forgotten and their service is appreciated.

Being in Alaska, one of our goals is to reach the Alaska Territorial Guard (ATG) veterans. Their role in the war effort wasn't recognized until the year 2000 and there are some still fighting for the veteran benefits that they deserve.

The ATG veterans we've taken so far have been from across the state. We've had Daniel Karmun from Nome, Wesley Aiken and David Leavitt from Barrow, Gust Bartman from Dillingham and Sigurd Edwards from Yakutat make the trip with us. These veterans spoke of patrolling out in the wilderness, watching for any attack on the home front. Some of them were 16 and 17 years old when they joined. They stated that for many of them it was the first time that they came in contact and worked with a white person. It was something they were proud to do, as with all of our veterans.

The veterans see as many memorials and monuments as we can fit in, from the WWII Memorial, to the Korean War Memorial, Vietnam Memorial, Lincoln Monument, Washington Monument, Arlington National Cemetery changing of the Guard, Women's Memorial, Iwo Jima, Navy Memorial and Air Force Memorial, to name a few.

We want this trip to be as memorable as possible for the veterans, a once in a lifetime event. One that they will talk about proudly and know that they didn't serve in vain.

We know that there are many more veterans out there and we need help reaching them. If you know of any, please either share this information with them or let us know and we'll contact them. Our contact information is The Last Frontier Honor Flight, P.O. Box 520095, Big Lake, Alaska 99652. Call toll free 1-866-790-7994, or 907-892-6097; or visit http://www.LastFrontierHonorFlight.com.

Alice Salzman is a  Last Frontier Honor Flight volunteer and board member.