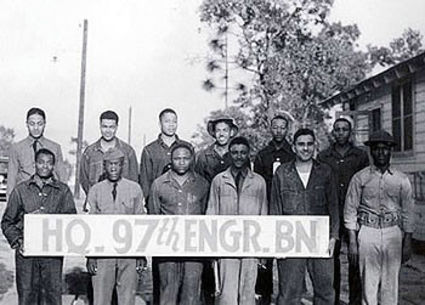 Though many in the the 97th Engineering regiment had never ventured outside their home counties in the south prior to the war, their accomplishments working in the far north building the Alcan Highway earned them a place in history.

The Alaskan-Canadian Highway, known now as the Alcan, was one of the highest priority projects in the Second World War after the Japanese attack at Pearl Harbor on Dec. 7, 1941. The strategic value of a highway from the contiguous 48 states to Alaska had been debated for years.

The "save the money crowd" said the cost to build the land link was too high for a territory with 75,000 natives and pioneers living in log cabins who hunted, mined, trapped and fished for a living. A coastal route had been the dream of territorial governors since the 1920s but the military said they couldn't defend the road from Japanese attacks. Since the present route had already been mapped out when the Japanese attacked Pearl Harbor, things went into overdrive, the project plans were dusted off and the rest is history.

In honor of Black History Month, my focus will be on the participation of African American troops who, although were still segregated from white units, distinguished themselves while enduring the worst equipment, food and living conditions of the 10,000-plus Army soldiers during the Alcan construction . Over 3,500 raw mostly black southern troops were assigned to the 388th, 93rd, 95th and 97th General Services Engineer Regiments (all black except for the white officers) and moved to Alaska and Dawson Creek, BC, Canada, to begin the construction in the winter of 1942.

Most of the black southern troops had never been outside of the county in which they were born and had no road building experience. Most were assigned pick and shovel work at first because the best equipment was given to the white regiments. Eventually the black regiments received some D-4 Caterpillar road graders and by the end of the project had D-8s and D-9 Cats with some road scrapers for good measure.

For this article, I'm focusing on the 95th's construction of the Sikanna Chief River Bridge north of Dawson Creek, BC, Canada. The construction began in cold spring of 1942 with the construction of a platoon bridge for short term use by the crew. At the same time, timbers were being cut for the temporary truss bridge which the Corps of Engineers knew would be swept away during the next spring breakup. But fuel and supplies could be moved over it until civilian construction companies, who were already being mobilized for follow up replacement of all temporary bridges, arrived.

The men of the 95th waded into the swiftly flowing freezing cold spring breakup waters of the Sikanna Chief River with little more than rubber waders to begin the setting of the pilings as the other troops were laying freshly sawn decking over the support structure. The work was dirty, cold and difficult since few of the black soldiers had any prior road or bridge construction experience.

What they did have were transferable skills, which allowed them to become productive in a short period of time.

The white officers assigned to the black units for the most part weren't the best the Army had to offer and thought the southern black troops were slow learners. The truth was they had been educated in the Jim Crow south and sent to sub-standard schools in the prevailing "separate but equal" education system. Most were field hands prior to enlistment and had been working on tractors and barns since they could walk and adapted well to this new experience.

The Sikanna Chief River Bridge was completed in just three days and amazed everyone up the chain of command. At the time, blacks were given little if any recognition for their contribution, as shown by a U.S. Army Signal Corps film from the late 1940s. It was 28 minutes in length and had less than 10 seconds devoted to the black troops. All it showed was a black unit in the chow line and said, "Colored soldiers did their part."

I would argue they did much more because this was the beginning of the desegregation that occurred in the Armed Service by order of President Truman in 1948. The black Engineer Regiments did more with less than the other regiments and were re-assigned to both the European and Pacific theaters of combat, where they distinguished themselves in battle.

These men and the ones who followed paved the way for the sweeping civil rights changes that occurred in the 1960s. If you ever have the chance to meet a veteran of one of these units, please take the time to profusely thank them for their service and their contribution to the construction of the "Greatest Highway in America."