Gelpad armor and airbags you can wear 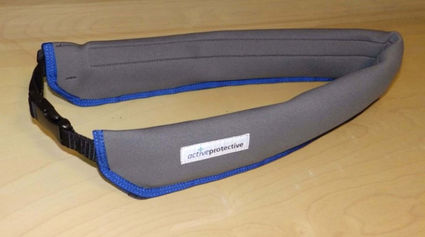 ActiveProtective Technologies is testing a micro airbag that is worn on the hips like a belt.

Airbags, now found in virtually every vehicle, have saved countless lives and substantially reduced the severity of injuries in crashes. Similar technology could greatly reduce broken hips resulting from a fall, something most seniors fear. In view of a rapidly growing senior population, other techniques could also greatly reduce the number of these life-changing injuries.

According to the Centers for Disease Control and Prevention (CDC), every year one out of every three adults 65 and older has a fall. Fall-related injuries by frail seniors result in five times as many hospital stays as injuries from other causes. More disturbing, falls cause over 95 percent of the hip fractures in the elderly. Unfortunately, 20 percent of those hip fractures bring death within one year while others never completely recover.

Dr. Robert Buckman and his start-up company, ActiveProtective Technologies in Allentown, Pennsylvania, has developed a promising solution – a wearable airbag that deploys in the event of a fall to protect hip bones. The idea was the result of Dr. Buckman's years as Professor of Trauma at Temple University, and his heading one of the busiest trauma centers in Pennsylvania. Here he saw many elderly people brought in with broken hips due to falls.

The micro-airbag is worn like a belt, either on top of or beneath regular clothing. The heart of the system is a technique called "fall disambiguation" that can determine an impending fall prior to impact with unprecedented accuracy. The technique uses three-dimensional motion sensors in the airbag system to detect atypical motion that is unique to falling. The 3D motion sensors monitor the motions and accelerations during normal, daily activities to determine departures from what is normal, which indicates a potential fall situation. If a fall is detected, a cold gas inflator, like that already used in seatbelt-mounted airbags found in some vehicles and aircraft, deploys a slab-like airbag that runs down the sides of the hips for protection.

Testing by ActiveProtective has demonstrated the ability to reduce impact forces by 90 percent, sufficient to eliminate the majority of hip fractures. Up to now, testing has been done using a human cadaver simulator that represents a 90-year-old woman. Human trials are scheduled to begin this year, with a commercial version of the micro-airbag planned for the end of 2016. Incidentally, testing is being done at Operative Experience in Maryland, also owned by Buckman, that builds a human cadaver simulator used for combat casualty and emergency trauma training. 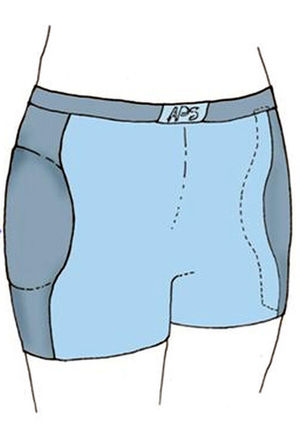 Armourgel is a thin material that moves with the body, but is strong and becomes hard on impact could be incorporated in garments.

Special undergarments with built-in pads to cushion bones during a fall have been around for decades. Unfortunately, they are not very user-friendly because they are bulky and seniors find them uncomfortable to wear, especially since the energy absorbing garment needs to be worn on a daily basis for significant time periods to be effective in preventing hip injuries. They are often stiff, inflexible and do not allow the skin to breath.

To overcome this, Armourgel Ltd. in the United Kingdom has proposed using its flexible, energy-absorbent material to help mitigate the impact of falls. Armourgel is a thin material that moves with the body, but is strong and becomes hard on impact. Armourgel and similar synthetic compounds are currently used in safety gear designed to protect motorcyclists in the event of a crash. The material can be incorporated into conventional clothes to provide protection for fragile bodies falling on to hard surfaces.