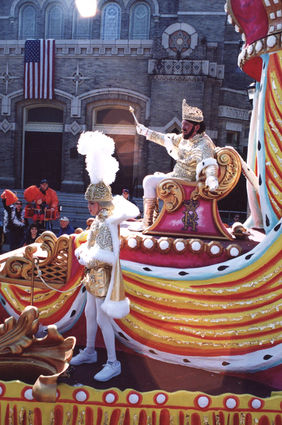 The King of Mardi Gras floats through the crowds.

Alaskans will find the terrain of New Orleans definitely alien - flat with no mountains, with a whiff of sulfur in the muggy air off the Bayou.

But in February, it's worth a visit when temperatures are lower than summertime and the city offers up its annual Dionysian fest, Mardi Gras.

Unlike Alaska, you can consume liquor publicly in New Orleans, and during festivals or during Saints football games, you can pull off into a parking lot and have a tailgate party.

But you might want to defer your visit to another time if moving through crowds of drunken revelers is not your idea of a holiday. But if you like Chilkoot Charlie's, you'll love this city.

Built by many different hands

Although inhabited by American Indians, most likely the Houma tribe, for 1,300 years, French trappers and traders came in the 1690s and gave it the French name of New Orleans in 1718.

It has had a turbulent history.

In the mid-1770s, it had become a wild place with soldiers made up of deported galley slaves, trappers and gold hunters creating disorder - kind of like the early days of Skagway, Nome and Fairbanks. In 1792, after the Seven Years War between Britain and France, New Orleans was turned over to the Spanish, under whose reign the city saw two catastrophic fires that burned 212 buildings in 1794.

The city was prized for its proximity to Mississippi River transportation and fertile soil for crops of sugar and cotton, but that didn't guarantee tranquility. In 1805, a census showed a population of 8,500, consisting of 3,551 whites, 1,556 free blacks and 3,105 slaves. The numbers being what they were, in 1811, 200 to 500 slaves, armed with hand tools, marched and burned plantations and fields on their way to the city, but were defeated by white militiamen.

The Department of the Navy closed down the famed Storyville District, New Orleans' Red Light District, even though the mayor protested - just like in Skagway, Nome and Fairbanks!

And over the years, the levies have burst, flooding the city, the worst being during Hurricane Katrina in 2005, when the floodwall system protecting the city completely failed.

For sure, do not travel here during hurricane season.

You can eat here - a lot. There's local seafood, like catfish, shrimp and crawfish, cooked the Southern way, which means fried.

I had a plate of fried chicken that I believe after three years is with me still. There is no delicacy in traditional dishes, just hearty, stick-to-the-ribs grub. The roux of fillet gumbo is a case in point.

Emeril Lagasse, well-known celebrity chef of Louisiana cuisine, who although born in Massachusetts, advises use of 3 cups vegetable oil and 5 cups flour for the roux to thicken the soup. Of French Canadian descent, he follows in the footsteps of French Canadians, who after the French and Indian War, were deported from Nova Scotia, New Brunswick, Prince Edward Island, and the Gaspe Peninsula of Quebec Province in what is known as the Great Upheaval, or Le Grand Dérangement. But it was those French Canadians who gave Louisiana's culture a French accent as Creoles or Cajuns.

So the mix of New Orleans' cuisine is basically French but with a twist – a spicy one.

New Orleans is as flat as the valley of Skagway, which means it's highly walkable, with wide boulevards and old time trolley cars when your feet get tired. And yes, there's a streetcar named Desire.

New Orleans' graveyards are a great place to visit, and sometimes you may be surprised by a funeral, complete with a Dixieland band playing upbeat music of farewell.

Much like tundra burials in Alaska's far north, the dead are buried above ground, but instead of on raised platforms, New Orleanians are in coffins, often housed in ornate tombs. 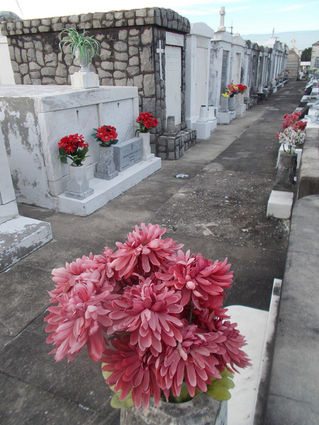 New Orleans' above ground crypts ensure that loved ones in a coffin stay put and don't float away.

While on the tundra, bodies tended to pop up because of frost heaves, in New Orleans it's the high ground water table that had bodies floating to the surface after a rainstorm. Even holes drilled into the coffins didn't solve the problem, so the Spanish method of using vaults was adopted.

Some of the tombs look like miniature houses, complete with fences, and are reminiscent of the spirit houses of the Athabascan in Eklutna and elsewhere in Alaska.

If you're not an AARP member, do become one. It's travel site offers great fares and the card gets you discounts everywhere.

A round-trip form Anchorage to New Orleans is $892, that's booking close to Mardi Gras. But plan further ahead – and that's always advisable – and the price drops.

I've heard a lot of Alaskans say that the best times they ever had on vacation were in New Orleans. That's a good enough reason to go.