A view of Anchorage in fiber arts 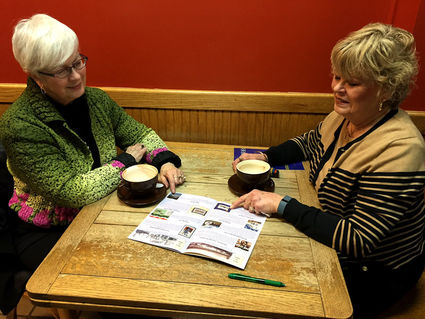 Anchorage is celebrating its centennial year, 2015, in many ways. One of the first events to come to life, reflecting the community's unique history, was a project of the Anchorage Log Cabin Quilters Guild. A show called "10 Decades and Counting – the Story of Anchorage in Quilts," made its debut in September in the ConocoPhillips atrium.

It's an intriguing, stunning display, not only of local quilting skills, but of the colorful history of Anchorage, told through the traditional medium of quilting.

I first caught a glimpse of some of the fascinating quilts created for this centennial project as part of an OLE! class (Opportunities for Lifelong Education) held at UAA. The presenter for the four class sessions on the 100-year history of Anchorage was Jim Barnett, volunteer chair of the Anchorage Centennial Celebration.

"My wife is one of the quilters," he told his audience with a marked degree of pride, at the last session, and showed slides of some of the quilts created by the guild.

I was captivated by the imaginative, colorful creations he showed us. I wanted to see more of them and learn more about how they were made. So over coffee one recent Saturday afternoon, I met with Jim's wife, Marilyn Barnett, and another member of the Log Cabin Quilters – another Marilyn, Marilyn Moreno. Both have been very active members of this quilters group, having served for three years as co-chairs of the guild's annual September Great Alaska Quilt Show.

Marilyn Moreno explained why the project seemed a perfect fit for the guild members.

"The guild has over 150 members who seem to share two things in common – love of quilting and love of Anchorage. The Anchorage Centennial Celebration provided us with the perfect opportunity to bring these two loves together."

After presenting the idea for the show to the Municipality's Centennial Celebration Committee in September of 2013, the project was approved as an official Anchorage Centennial event.

Then the creative work began. Members were challenged to produce an art quilt to depict a person, place or event that was important to the development of Anchorage. A large number of quilts were created, they were juried, and 40 were selected for the show – four for each of the 10 decades.

"I'd never done an art quilt before. Most of us had always followed quilting patterns. This was a great learning opportunity for us, experimenting, learning new techniques. I admit it was a stretch. There were times I wondered how many of my hairs I would pull out."

Her patience won out, and two of her quilts are now in the show. Both are brilliantly colored, vibrant creations, one titled "Captain Cook Statue in the Sunset," and the other "The Bake Shop and Flowers, Girdwood."

Marilyn Moreno took on her own challenge. Since humor and adventure were possible aspects of a chosen scene, she worked from a photo provided by two Anchorage women golfers, whose excursion on the greens was interrupted by a surprise appearance, a large brown bear staring at their golf clubs.

"The women decided a quick visit to the club house would also be a good way to spend their day."

"It took me a long time," she said. "But I carried on. I got curious. How would this come together? What would it look like?"

Her quilt, titled "Golfing in Anchorage," was juried into the show. As was a second quilt she created, "1940 Fourth of July Parade." 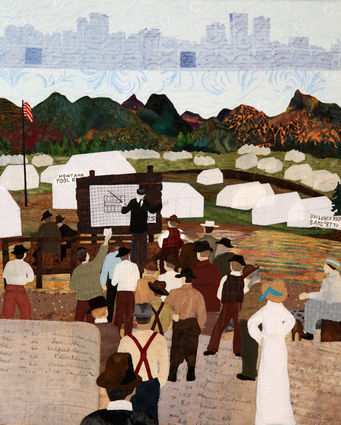 "Land Auction – Did They Imagine?" was created by Anchorage quilter Gail Ramsay as part of a project commemorating Anchorage's 100th anniversary through quilts.

Some of the other quilts displayed are based not only on things important to the history of Anchorage, such as its 1915 land auction and beginnings as a tent city, but also important to the history of the individual quilter. There are scenes of commercial fishing, flying airplanes, Col. Marston's potato patch, gardening with the help of a moose, the Empty Bowl Project for Bean's Café. Some are just for fun – Annabelle the elephant artist, bad Binky and the tennis shoe at the zoo, the Bird House.

When the individual quilts are displayed, they are hung below one of 10 quilted, horizontal banners, representing Anchorage scenes from each of the 10 decades. Photographs for these banners were chosen by the guild committee members with the help of "highly qualified and very patient staff" at the Anchorage Museum Atwood Resource Center.

Opportunities to view the Anchorage Log Cabin Quilters centennial show will crop up during this centennial year, at the Tent City planned for July, and at the annual September Great Alaska Quilt Show.

Both Marilyns summarized the centennial project as a great learning experience and a wonderful shared goal. Marilyn Moreno added, "It has provided an opportunity to step back into the past and walk a little in the footsteps of those who walked these same Anchorage paths years ago."