Food for the soul and art for the heart 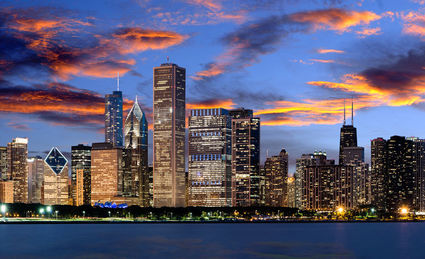 The crowded Chicago skyline lights up at sunset. Don't let the city's size keep you away.

Many Alaskans I know say that Chicago is a great city and they love to visit. Traveling there in April for my son's wedding, I had a hard time adjusting to the fact that this is a city with a capital "C." It's really big.

Think of it this way: Anchorage has a little over 300,000 people. Chicago? Close to 3 million – more than the entire state of Alaska.

Unlike New York, with its landmarks of Central Park and the Empire State Building, I grasped for a sense of direction, some guide post, some familiar site. There's Lake Michigan, but it's usually not close by, or there's the Sears Tower, now crowded out by new larger buildings.

And I felt like when we got into a cab, we traveled for a long time, although I did become familiar with sites along the way.

Get over the size shock, it has a lot to offer.

Also remember Chicago's infamous baseball underdogs, the Chicago Cubs, whose devoted fans have stuck with them through thin and thin, but who have not won a World Series championship since 1908.

Its hometown baseball park is a thing of beauty from the past, looking so much like a space ship that has landed on a Roman coliseum. Built in 1914 as Weeghman Park for the then-Chicago Whales president, the Cubs played their first game there in 1916. Chewing gum magnate William Wrigley Jr. bought the Cubs in 1921, and changed the name.

The older baseball parks seem to instill a real passion for hometown fans, who will endure decades of winless teams like the Boston Red Sox and the team's historic losing streak, referred to as the Curse of the Bambino after it sold star player Babe Ruth, AKA "The Bambino," to the New York Yankees in 1919, causing an 86-year losing streak broken only by its winning the World Series in 2004.

Chicago has the highest population of Greek Americans in the country and has a thriving Greektown with a bewildering array of restaurants to choose from.

No, sadly there is no Dancing Zorba Restaurant like in the movie, "My Big Fat Greek Wedding." But there are so many. Luckily, my son brought me to one he recommended - Greek Islands Restaurant.

Now, I'm not boasting, it's just the way I was raised, but I'm a very good Greek cook having been trained from the time I could stand upright in a chair shoved up to a counter, grasp a wooden spoon with some strength, and not tip over.

My test for any Greek restaurant I go to for the first time is the pastichio. A simple dish, it is Greek comfort food, a glorified macaroni and cheese with a fragrant meat sauce on top and a béchamel sauce on top of that. This dish is the canary in the coalmine for me. Greek Islands was the best I've ever had, outside of Greece, but did lack the depth of taste in the sauce of the nutmeg or cinnamon that is used to spice it, but the béchamel sauce was thick and cooked just right.

We were seated in the "best section," as the host boasted to us, and sure enough, we were surrounded by Greek men, speaking Greek and wearing gold chains. One was even clicking through worry beads, called komboloi, those wooden beads on a strand that Greek men run through their fingers like a secular rosary. It was great.

Another place we discovered was the Standard Market Grill in Lincoln Park that offers a wide variety of dishes for the vegan or carnivore. I loved its Buddha Bowls of brown rice, peanut ginger glaze, seasonal market vegetables, peanuts, and a choice of more vegetables, tofu, chicken, 24-hour marinated steak, tuna or grilled salmon for $10 to $15.

Just filling enough and you go away feeling like you have more energy, not stuffed or loaded down.

Art and a school of architecture

The Art Institute of Chicago is a great museum, and frankly, I was awed by some of the paintings there that I have never seen before – and I've been to a lot of museums.

The Monet from his series of 29 paintings from a trip to Norway in 1895, Sandvika, Norway, with its arched bridge reminiscent of the one at his home in Giverny, France, is all fluffy snow and muted color.

But most arresting is the 1896 oil by Gaston La Touche, "Pardon in Brittany," with its muted, almost black and white palette of somber clothes and women's white hats, an impressionistic hint of faces, all lit up by the golden glow of candles. It seems so modern for its time.

Near the entrance, there's an excellent selection of Bhudda heads from Indonesia and Pakistan and other countries. 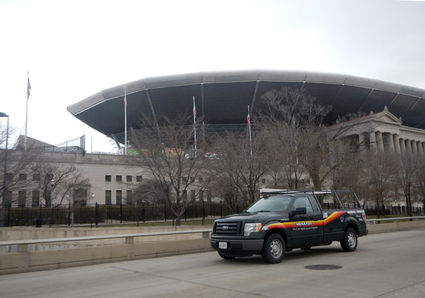 Chicago's Wrigley Field looks like a spaceship that has landed on a Roman coliseum. Built in 1914 as Weeghman Park for the then-Chicago Whales president, the Cubs played their first game there in 1916. Chewing gum magnate William Wrigley Jr. bought the Cubs in 1921, and the name changed.

This is a gem of a museum, with its iconic Midwest paintings, "American Gothic," by Grant Wood and Edward Hopper's "Nighthawks."

Chicago is also home to the Prairie School of Architecture of the late 19th century embodied in the work of Frank Lloyd Wright, whose home and studio is here.

Influenced by the Arts and Crafts Movement in England, also in the late 19th century, it aimed to take that school's use of natural materials and hand-made objects and furniture to make a uniquely American version.

Wright's work connected the home to the natural world through large windows and a simple architectural style that was anti-European. You can see his influence everywhere in Chicago and its suburbs.

I am not kidding. The wind off Lake Michigan will rip your face off as if you were in the Alaska arctic. My son wears his Barrow parka with its wolverine ruff and says it works just fine.