1918: The big sickness spreads across Alaska 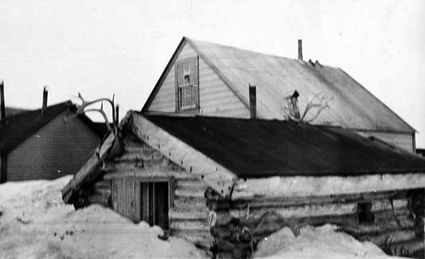 Many victims of the 1918 influenza froze to death because they were too weak to chop wood and keep fires burning.

Called the Spanish flu, only because the Spanish press wrote about it, a virus took more than 500,000 American lives between 1918-1919 (estimates worldwide range from 20 to 100 million). And it came north, even though Territorial Gov. Thomas Riggs did everything in his power to keep it away from Alaska's shores.

When 75 citizens of Seattle died from the flu during the week of October 12, Riggs asked steamship companies to examine all passengers heading north on the final ships of the season and not allow anyone with symptoms to travel. He warned that anyone showing signs of influenza would be isolated at the port of debarkation and assigned physicians to meet the ships and enforce his directive.

By the end of October, Seattle's death toll had reached 350. And the panhandle of Alaska was too close to Seattle to keep the flu at bay.

Juneau's first reported case came on October 14. Soon it had spread along the coast. Juneau officials advised people not to congregate in groups, which meant staying away from churches, schools, social functions and pool halls.

The panhandle came through the epidemic better than areas farther north and west, because it had services and physicians who set up quarantine areas, emergency hospitals and buried the dead immediately. It also had help from professionals in Seattle and San Francisco.

But when passengers from the S.S. Victoria, the last ship of the season from Seattle, docked in Nome, all hell broke loose on the Seward Peninsula.

Before leaving Seattle, the ship's passengers and crew had been checked by three physicians, separately and independently, to assure that no one who exhibited symptoms would be traveling. And when the Victoria arrived in Nome on October 20, all those who came ashore were quarantined in the hospital for five days and all freight and mail were fumigated.

No one showed any signs of influenza.

But within days, Alaska Natives were sick and dying. Few escaped infection. In a single eight-day period, 162 had died.

The people of Mountain Village initiated a quarantine.

"This was a hard thing for the Natives to do," wrote the school teacher, "but the safety of their own families impelled them to break their habits and the customs of their ancestors (to gather together)."

The flu never made it to Mountain Village.

However some mail carriers that hit the trails with the governor's order for quarantines delivered more than Rigg's message. The Spanish flu followed the mail carriers' routes to York and Wales.

The epidemic killed everyone in York and 170 of Wale's 310 residents.

Flu also spread to Solomon, Golovin, Mary's Igloo and Teller. The population of Teller Mission, located about five miles from Teller, was decimated. The deadly virus may have reached that village, later renamed Brevig Mission, on the breath of men bringing supplies. Natives who loaded their dogsleds with supplies in Teller might have picked up the virus by working beside the men. Between November 15-20, 72 of Brevig Mission's 80 residents died.

The flu made its way to other parts of Alaska, as well, including Kodiak Island – where 47 of the island's 550 residents died – Copper Center, Cordova, Skagway and Cook Inlet. In the spring of 1919, it hit Fairbanks, the Aleutian Chain and Bristol Bay.

By summer 1919, the killer had disappeared. And while many white Alaskans contracted the flu, only 150 deaths were reported. But between 1,500 and 2,000 Natives had died.