'We came to stay' 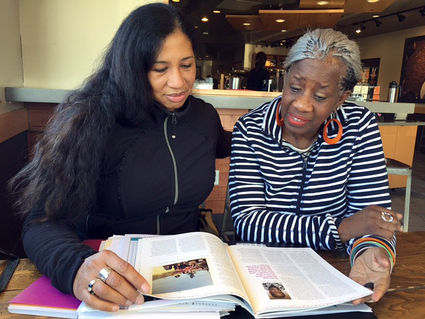 "Where are you from?" "How long have you lived here?" Anchorage is known for its diversity, as a melting pot for people from all over the world, so these questions frequently pop up when introductions are being made.

Three women of varying cultural backgrounds decided to submit a proposal to the Anchorage Centennial Committee, focusing on where some of this community's people came from and why they have stayed.

Vivian Melde is Filipino and African American. "There is even some Chinese thrown in there," she states.

Shirley Mae Springer Staten is African-American "with some American Indian heritage somewhere in there too," she relates. And the third woman involved in the centennial project, Angelina Estrada-Burney, is of Mexican descent.

The name of their approved centennial project is "We Came to Stay: Anchorage Untold Stories."

"We wanted to find the stories of seniors living here, people who have been in Anchorage for many years," Vivian says. "In some cases, we were able to gather stories of their ancestors, pioneering people who came here in the very earliest days of this community."

Shirley set off to video some of these people and gather their stories of early Anchorage and why they had come to live here. Why had they stayed and what had they contributed?

"I originally had the names of two early pioneers, but my list of people with interesting stories of early Anchorage kept growing," she says. "I eventually collected nine videos, stories from people like Alfredo Agron, now 104, a Filipino immigrant who moved to Anchorage in 1951. He admits that first winter felt very cold. But when summertime came, he began to explore Portage, Kenai and Homer and grew to love living here, especially the hooligan fishing.

"He was a leader in the Filipino community, becoming the first president of the Filipino Community of Anchorage. He worked in construction, and spearheaded the big push for the first public swimming pool here at West High School. His storytelling was so interesting to me. I could have kept going, interviewing lots of others," she says, laughing.

Other people, like Martha Fair, easily charmed Shirley and captivated her interest. Martha is 94, an African-American woman who came to Anchorage in 1949 to work in construction and as a truck driver. Today, her memory is still sharp.

"I came on April, 1949," Martha says, leaning back and remembering that first day in town. She is proud in her memories. "I heard there was work here. I came to check it out. There were not that many black people here then. I never worried about that. Me, I go anywhere. I know how to do all kinds of work."

That is what she did. "I cooked. I cleaned. I worked on the construction of the Hill Building and on the three movie theaters in town then. I was in local 341. I used to have my own grocery store down on 18th Street. I lived down in 'the flats' near where Shiloh Baptist Church is today. My four kids were born in the old Providence Hospital. I left the flats for Green Acres, near where 36th and Lake Otis is today.

"Then I had a beauty store across from 13th and Gambell. Eventually I heard there was land off Elmore, near where DeArmoun is today – one-and a-quarter acre lots. Lots of black people were getting land there. So I moved there and built a house.

"I'm nosey! I never had trouble finding work. I ask questions. You're stupid if you don't ask questions. I go here and I go there. I'm not afraid of nothing! People say, 'I never saw a woman like you.'"

Watching the video that Shirley has made of her visit with Martha, one finds it is easy to become captivated by this kind of proud, joyful storytelling.

"There are some real characters out there," Shirley says, "and it is a treasure for me to collect their early memories."

Vivian summarizes her enthusiasm for this Anchorage Centennial project. "I used to sit with Mr. Agron and his son, Gary, for hours, listening to the story telling. If these stories are not shared, they will be lost. The project gives us as a community an opportunity to hear these lesser-known stories of the city's immigrants, people who came to stay and have enriched all our lives." 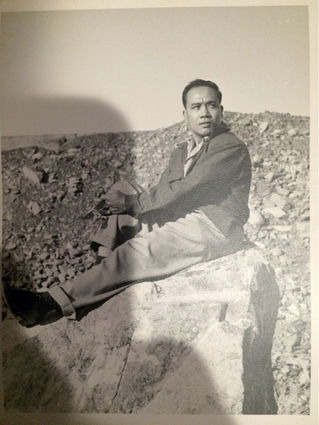 Courtesy of the Agron family

Alfredo Agron, now age 104, came to Alaska in 1951 as an immigrant from the Philippines. According to his wife, Pacita, he came for adventure, but grew to love Alaska and Anchorage, and stayed, making many contributions to his community.

Two events in April will provide the public with the opportunity to learn about some of these men and women who arrived in Anchorage from places all over the world during the early decades of the city. Both events are free and open to the public.

On April 11, beginning at 7:30 p.m. in the Wendy Williamson Auditorium at the University of Alaska Anchorage, there will be a multimedia production featuring some of these first-person accounts, interspersed with music and dances, from those who immigrated north to make Anchorage their homes and to start businesses and families here.

On April 19 from 3 p.m. to 5 p.m., there will be a Story Share in the Innovations Lab at the ZJ Loussac Library. Families are invited to bring their own Anchorage arrival stories along with cultural potluck dishes to share in an informal environment.

For more information about these events, as well as a place to submit your own Anchorage arrival story, visit http://www.anchorageuntoldstories.com.