The Cook Inlet of France 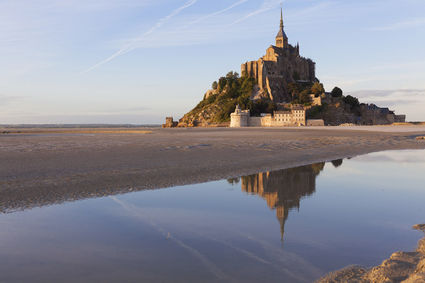 At the mouth of the Mont Saint-Michel is an island commune in Normandy, France. It is located approximately one kilometer off the country's northwestern coast, at the mouth of the Couesnon River near Avranches, south of Paris. Anchoragites will be familiar with its surrounding sucking sands and extreme high tides.

In winter, although I hanker for Hawaii and know it's the cure for cabin fever, I usually obsess with a location farther north and farther away. This winter it's Mont Saint-Michel on the Normandy Coast of France.

I kind of feel like Richard Dreyfuss in "Close Encounters of the Third Kind." In my quiet moment, I want to build a gingerbread house of that magnificent monastery on an island.

I have been there twice, once with a boyfriend, who, by the time we got to Athens, I wanted to hurl off a rooftop.

And in the mid-1960s, my family traveled the route my father took in World War II after landing, luckily, in the second wave at Omaha Beach in Normandy. I still have the English license plate off the Volvo sedan that took us through the wine country and up into Germany.

It was a rocky trip with five of us squeezed together and my dealing with the European tradition of having an unmarried daughter sleep in the same room as her parents, usually on ancient horse hair settees. Most memorable of them was the one in the brothel near the train station in Lyons, France, that we somehow stumbled into one night.

I must do an aside here. At the birthplace museum for Beethoven in Bonn, Germany, the docent scoldingly said that the house was one of the few to remain after the Allies bombed the city, to which my mother so swiftly replied, "Well, who started it?"

Back to the island.

The tides do come and go with speed

On both visits, we had to run for it when the tides started to come in, threatening our escape from the island until the tide changed.

Anchoragites will be familiar with the island's surrounding sucking mud and extreme tides, varying 46 feet between high and low water marks, compared to Anchorage, where it takes but a 27-foot tidal differential between high and low tide to form a bore tide 6 to 10 feet tall, that reaches speeds of 10 to 15 miles per hour and barrels through Turnagain Arm. Mount Saint-Michel does not experiences bore tides of the magnitude of Cook Inlet.

But the appeal of Mont St. Michel, aside from its watery dangers, is the experience of walking into a medieval, still-functioning fortress, one that repelled a full force of English invaders in 1433 during the Hundred Years' War.

Since the 8th century, it has been the home of the monastery, after which the island is named. It has rich history that includes the legend that in 708 AD, Archangel Michael appeared several times to St. Aubert, the bishop of Avranches, and told him to build a monastery. The directive was oddly ignored, so the angel burned a hole in the saint's skull. You can still see this relic in the Saint-Gervais Basilica in Avranches, also in Normandy.

I fail to understand how you can ignore a visit from an archangel and still get to be a saint.

In the 11th century, the Romanesque abbey church was founded over a set of crypts where its rock rises to an apex, and using this natural feature, the first monastery buildings were built up against its north wall.

In the 12th century, the Romanesque monastery buildings were built out to the west and south. In the 13th century, after his successful conquest of Normandy, a donation by Philip Augustus, king of France, funded building the Gothic section of the "Merveille," two three-story buildings, crowned by the cloister and the refectory.

Through the ensuing years, the abbey was showered with Norman patronage that allowed the monastery to add on architectural finery and make it even more invincible.

In the 14th century, the Hundred Years' War made it necessary to bolster the Benedictine abbey's defenses that made it impregnable. The Hundred Years' War, from 1337 to 1453, was the conflict pitting the kings and kingdoms of France and England against each other. The Duchy of Guyenne (or Aquitaine), though it belonged to the kings of England, remained a fiefdom of the French crown. And as the closest relatives of the last direct Capetian king, Charles IV, who had died in 1328, the kings of England claimed the crown of France from 1337.

It was in this war that Joan of Arc is credited with lifting the siege of Orleans in 1429. After 1453, the English just lost interest and realized they could never win, and began to look elsewhere for conquest.

The island fortress also has a prominent place in the Bayeux Tapestry depicting its role in the 1066 Norman conquest of England, where Harold, Earl of Wessex, is shown pulling Norman knights out of the quicksand during a battle with Conan II, Duke of Brittany.

From a dungeon to a tourist attraction 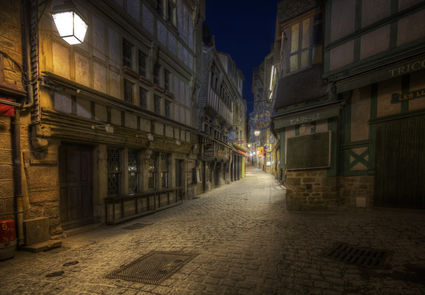 A medieval street of Mont Saint-Michel shows its appeal to international visitors with a sign in Japanese.

In 1793, during the French Revolution, revolutionaries used the abbey as a prison. In 1828, a garrison was built. An imperial decree of 1863 ended the use of the island as a prison or military post.

In 1874, it was opened to the public year round, is a UNESCO World Heritage Site, and since 1969, a monastic community has had a permanent presence.

Travel from Paris to Pontorson by train and then by bus or take the train from Gare Montparnasse in Paris to Rennes, and take a bus, http://www.destination-montstmichel.com. There are also buses from Saint-Malo to Pontorson timed to connect to buses to Mont St.-Michel.

Or just rent a car, but you can't take it onto the island.

Do go in the fall or winter; tourists crowd the site in the spring and summer. In fact, I'd encourage people to go to Europe off season when things are cheaper and fellow tourists fewer.

I'm sure any Alaskan is up to the chill and has the clothing to keep warm.