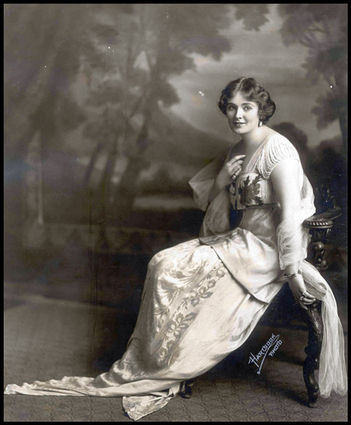 Famed Hollywood actress Majorie Rambeau got her start in the entertainment business by performing on stage in Nome during the 1906 gold rush.

Although the frenzied gold seekers of the North lacked most of the luxuries, not to mention necessities, of civilized living, they did have theaters – even opera houses.

There had been entertainment in California's gold rush of 1849, but never had there been such garish and colorful entertainers as in the days of '98. And many of them went on to fame and fortune.

Sid Grauman, later owner of Hollywood's Grauman's Chinese Theatre and high priest of Hollywood's cinematic palaces, started his career producing tent shows in Nome. Even before that he had been Dawson's foremost newsboy, and he never became so lordly that he disowned his Klondike newsboy days. In fact, he credited them as giving him the ideal background for his later career.

Another future showman early discovered that a man would spend his last dollar to be amused. Alexander Pantages concluded that supplying amusement was sounder business than supplying supposedly primary needs. Like Grauman, he started in Dawson and ended up at Nome. His Pantages Orpheum provided the best show in town. After he returned to the states, he started acquiring film palaces and ended up selling his circuit for $24 million.

Most of the actors and actresses providing gold-rush entertainment were "waitresses, box hustlers, salesmen, tinhorn gamblers and the usual hangers-on of a mining camp," sources reported. A few, however, were professionals – and some went on to stardom.

Marjorie Rambeau, for instance, who later became one of Broadway's leading beauties, was a child performer when she came North, traveling with her mother and missionary grandmother.

The mother took no chances with her little daughter and dressed her as a boy, and it was as a street urchin Rambeau made her debut. She was a great hit singing and playing a banjo at Tex Rickard's famous Northern Saloon in Nome. Enchanted customers pelted her with gold nuggets.

In 1959, Rambeau told famous columnist Hedda Hopper about her early days performing and growing up in Alaska. She lived in a cabin with a sod roof, worked fur traps, ate seal meat and ran her own dog team.

She later traveled to Dawson and appeared in theaters there. Rambeau said she knew Robert Service. She also told Hopper that her manager ran off with the box office receipts and left the acting company stranded in the Yukon Territory.

Another small fry who later became famous was Hoagy Carmichael. He also entertained Tex Rickard's customers in Nome. Only 8 years old, he was billed as the "boy wonder," playing the piano in the Northern.

The entertainment business proved as profitable a gold mine as any of the rich claims on Bonanza Creek and there were no lack of entrepreneurs to take advantage of the gold seekers' frantic search for amusement and forgetfulness.