Square in his name smacks of Alaska and the Yukon 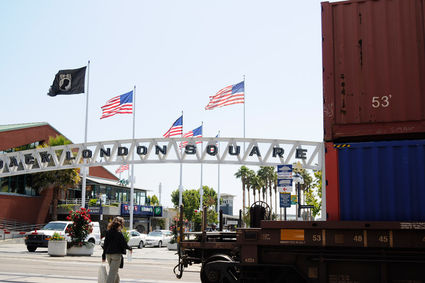 Once an industrial area, Jack London Square has been transformed into an upscale tourist destination – but still with railroad tracks down the center of the street.

San Francisco, where the city's port ships out hundreds of thousands of tourists north to Alaska on cruise ships, has another Alaska connection nearby, a literary one – Jack London Square in Oakland just across the bay.

Jack London was the author of such Klondike Gold Rush-era literary sensations, "Call of the Wild," "White Fang" and "The Sea-Wolf." The site has London's relocated Klondike cabin, and it's open all the time for people to visit. It will remind you of the first dry cabin you ever rented in Alaska.

There's even a hungry looking wolf, in bronze, lurking nearby.

But it's also the place where London, as a young boy, experienced a Dickensian childhood.

His mother, descendant of a Puritan settler of the Massachusetts Bay Colony, moved to San Francisco with her father after her mother died. She worked as a music teacher and a spiritualist, supposedly channeling an Indian chief.

Pregnant with Jack while living with an astrologist, who claimed he wasn't the father and left her, she shot herself in despair and became mentally unstable for a time. After Jack was born, she gave him to an ex-slave to raise, and she would become a constant mother figure all his life. Later, after remarrying, his mother took Jack back and settled in Oakland, and her new husband gave Jack his last name, London.

It was in the now-Jack London District at Heinhold's First and Last Chance Saloon, a sailor's bar, that London sat at a table and studied while in grade school. There's an iconic picture of London with his head down deep into book.

At 17, he confessed to the bar's owner, John Heinold, his desire to attend university and pursue a career as a writer, and Heinold lent London tuition money to attend college, which he did at the age of 21 in 1897.

While at the University of California Berkeley, he researched the name of his biological father in the newspaper and learned about his mother's suicide attempt. He wrote to his father, who again denied paternity. According to biographers, it was either this rejection or financial difficulties that had him leave the university.

And so it was off to the Klondike Gold Rush to seek his fortune, but his fortune was not found in the ground, but on paper.

Drawing from the characters he saw and heard at the First and Last Chance Saloon, so named because it was the first and last chance for sailors to have a drink before shipping out, and those fortune seekers who traveled to the Yukon, London accumulated a rich source of material for many books.

If you're a rail fan, this is a great place for you. 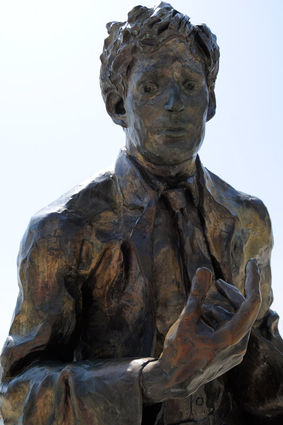 The beloved writer of books about the Klondike Gold Rush, Jack London, a native of San Francisco, is honored with a bustling square in the heart of the Port of Oakland.

Jack London Square also boasts many spots for eating seafood, especially shellfish. I had a memorable meal at a place I fear is not there any more. It had a selection of oysters from Mexico to Maine, and was a great way to taste how different the oysters tasted from each different ocean.

However, I have had good oysters at Jack's Oyster Bar and Fish House. This place takes its seafood as seriously as do Alaskans.

The Square is filled with lots to see and do and buy, every month on a Friday there's Jack's Night Out, a bazaar with booths of local artists and fresh produce, like the Downtown Market in Anchorage.

If you're staying in San Francisco, take the ferry from the Ferry Building or Pier 41 and cruise the Bay to Jack London Square. Ticket price includes free validated parking and transfers to AC Transit and Muni.