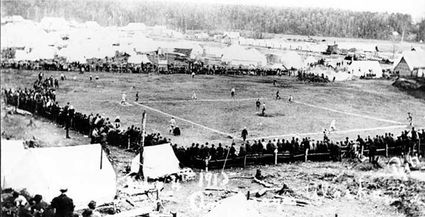 Railroad workers enjoy a game of baseball on a roughed out ball field in Ship Creek's tent city on July 4, 1915.

The infant town of Anchorage, only a few years old, had always been interested in America's favorite pastime when William F. Mulcahy, later known as "Mr. Baseball," blew into the lusty, young railroad town in 1922. Everyone turned out to watch the games played evenings after supper and weekends. As far back as 1916, Anchorage had a regulation baseball diamond, built by the Bridge Engineers, located in what was known as Recreation Park in the railroad yards north of Ship Creek.

A press box, with private telephone communication to the newspaper office, provided avid fans with a play-by-play account of the games. And competition was keen, not only in Anchorage, but also with nearby communities like Knik and Seward. Fans who loved the game traveled by boat to Kern Creek, and then pumped themselves to Seward by handcars to catch a glimpse of the action.

For a short time, baseball was eclipsed by the clouds of World War I when Anchorage lost most of its able bodied men. Seventy-five percent of the town's male population was eligible for the draft. The town did rally enough fellows for a special benefit game in 1918, however. The game between the Elks and the Masons turned out a little lopsided, with the Masons taking it 19-9, but the townspeople had a great time and netted $57.60 for the Red Cross effort.

When the war ended, Anchorage's fortune took an upward turn. Ample funds were available, for the first time since building of the railroad started, and construction went full steam ahead.

In September 1922, Mulcahy hired on from the New York, New Haven and Hartford Railway to take the position of Station Auditor Assistant – he retired as General Auditor. Before that he had never traveled farther from his native Connecticut than Boston or New York to watch the Yankees and Red Sox play ball. The new land must have seemed strange and different from his former home. The days were getting short and cold in September and the winter nights long and dark. But sitting around the bunkhouse at night, he found the talk was all about the previous season's baseball games, and predictions were rife about what the next summer would bring.

Mulcahy, who loved baseball, began to feel that maybe Alaska wasn't so strange and different after all.

In 1923, Mulcahy became president of the baseball league, as well as its treasurer, secretary, groundskeeper and ticket seller. He traveled to Fairbanks with an all-star team to play in the Midnite Sun Celebration, and told his wife, Gertrude, his team "was phenomenal."

During those first 10 years that Mulcahy ran the league, the Moose Lodge and the railroad sponsored teams; a team with real uniforms was sponsored by a prominent plumbing concern. The uniforms, donated by various merchants, had the names of the donors blazoned across their backs, making the players walking advertisements.

In 1947, Mulcahy was named Alaska's first National Baseball Congress Commissioner, which was the beginning of a program that later carried the Anchorage's Glacier Pilots and Bucs to several national championships.

The selfless Irishman was surprised when it was announced in 1951 that the new baseball field at Seventh Avenue and C Street was to bear his name. Considered one of Anchorage's "Grand Old Men," the community wanted to honor the man who, for so many years, stood for baseball in Anchorage. With seating for 750, Mulcahy Stadium held nearly half again as many as the earlier facility. A new stadium, completed in time for the 1964 season, also was given his name.

The Mulcahys returned to Connecticut in 1953, where "Mr. Baseball" organized a Golden Age Club and a Retired Men's Club. He died at the age of 68 on New Year's Day 1965.

This column features tidbits found among the writings of the late Alaska historian, Phyllis Downing Carlson. Her niece, Laurel Downing Bill, is turning many of Carlson's stories into a series of books titled "Aunt Phil's Trunk," available at bookstores and gift shops throughout Alaska, as well as online at http://www.auntphilstrunk.com.