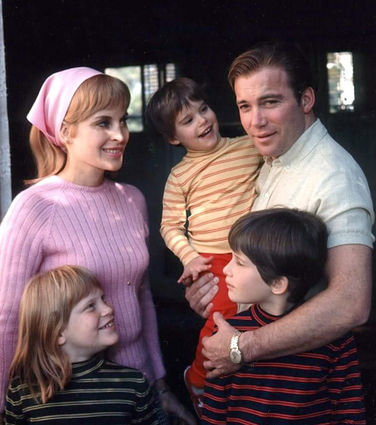 William Shatner at home in 1967 with his first wife, Gloria Rand and his children Lisabeth, Melanie (in arms) and Leslie.

Her father commanded a spaceship in a popular 60s television series. Two decades later, in 1988, Melanie Shatner was featured alongside her dad in an Oldsmobile TV commercial revealing her own desire to zoom around in something "space age." But it wouldn't be the last time father and daughter acted together.

The pair shared some on-screen time the following year when "Star Trek V: The Final Frontier," was released. Directed by her father, William Shatner aka Star Trek's Captain Kirk, Melanie can be seen wandering the Enterprise's bridge throughout the film.

"I actually auditioned for another part, but was completely wrong for it," recalled Melanie – now Melanie Shatner Gretsch after marrying actor Joel Gretsch in 1999. "My dad called and said I didn't get the part but there was another small role for the captain's yeoman if I wanted it, and I said of course."

It launched her somewhat short adult acting career, which included two dozen movie and television roles over the next 10 years.

"I didn't fully enjoy acting," she admitted. "I made a living acting for a while, but wanted to be successful in other ways."

That success was soon seen on Ventura Boulevard, in Studio City, California, in the form of Dari Boutique (see http://www.shopdari.com), which Melanie opened 16 years ago. Stocked with cutting edge fashions, Dari quickly became a popular destination for trendy shoppers.

Melanie says her dad wasn't too disappointed when she abandoned a career in entertainment for retail sales. "He was probably relieved because acting can be a brutal profession. But really, anything I wanted to do was okay by him. He even helped by loaning me the money to get the store started."

"She was always the kid wearing smart clothes," recalls Bill Shatner, from his home in Studio City. "She just knew about style. Her sisters and all the other kids used to ask her for fashion advice."

Although growing up with a busy, famous father had its drawbacks, Melanie gives her dad high marks as a parent. "Ever since I was born he's been on television and his office was a movie or television set. When we were younger, he'd take one sister at a time away on location for a whole week. We all have such great memories of getting to hang out with him and watching him work."

Shatner and his first wife were divorced in 1969, but Melanie says she and her two older sisters – Lisabeth and Leslie – remained close with their father.

"We spent the weekdays with my mother and the weekends with him. He would do whatever it took to get home to see us, even if it meant driving all night. I think that illustrates what a wonderful, committed father he was and is."

"All divorces are traumatic," added Shatner. "But the girls have turned out to be wonderful, smart women. Each is talented in some area – Melanie with Dari's, Lisabeth is a lawyer, and Leslie works in advertising. We get together often as a family."

The Shatner clan expanded in 2005 when Andy Clement married Melanie's sister, Lisabeth, and says he was a little surprised when told who her father was.

"But the first time I had dinner with them all, he welcomed me into the family even though Liz and I hadn't been dating long," recalled Andy, who founded Creative Character Engineering in Van Nuys (see http://www.creativecharacter.com). "It was incredible to see someone so attached to his kids." 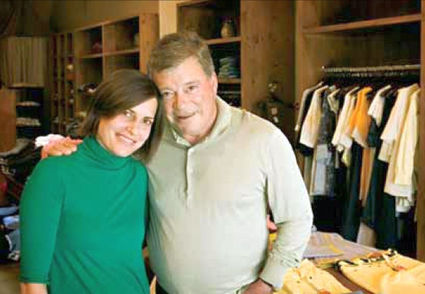 Melanie Shatner and father William Shatner at Dari Boutique in the early 2000s.

"He really is a dynamo and his mind just never stops working. He always wants to get involved with a production to make it better. So many actors just turn it on when the cameras are rolling, but he's always cranking."

Like most in the business, Shatner has had his share of project clunkers over the years. But, says Melanie, "working is what keeps him young, excited and creative. You've got to give him points for always trying something new."

And if there's a lesson Bill Shatner has learned in over 50 years as an actor, it's one he willingly shares as a father.

"You can only pass on endurance," he advises. "Everybody has to make their own mistakes and learn from them."