A tour guide for a place like no other: Unalaska 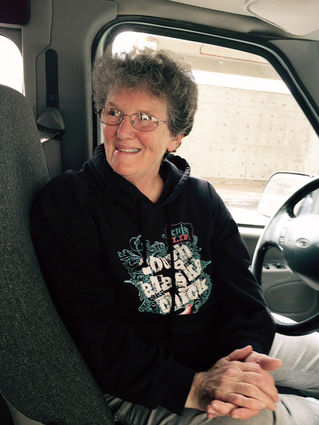 Bobbie Lekanoff is the owner and operator of The Extra Mile Tours and a 40-year Unalaska resident.

I looked out the window of the small plane as we approached our short runway and saw nothing but olive-green cliffs. They filled the window and I was startled. The bumpy bluffs seemed so close I felt I could reach out and touch all that green, sailing by on my left.

It was Mother's Day, a few weeks ago, and a long-held wish was becoming reality. My husband Elliott and I were flying into Unalaska and Dutch Harbor to spend a few days exploring this place, a place like no other.

We arrived in a drenching rain – no surprise there, from what I'd been told. Our first stop was the expansive Mother's Day brunch buffet at the Grand Aleutian Hotel, where we would be staying. We had just enough time to dump our two small bags in our room and head to the Chart Room. Tables were loaded with typical brunch foods – bacon and ham, muffins, eggs, bowls of fruit – and seafood, mounds of seafood, fresh from the bays at the hotel's door – crab, scallops, salmon, shrimp. We dove in!

Bobbie, the owner and operator of The Extra Mile Tours, met us in the hotel lobby after brunch. She has lived in Unalaska for almost 40 years. I'd found her website before we left home, called her, and she'd graciously offered to tour us around Sunday afternoon when we arrived.

The Unalaska Visitors Guide wisely states, "It takes time to learn a place." We had just three days to learn what we could about this intriguing spot in the Aleutian Islands, volcanic lands between the Pacific Ocean and the Bering Sea, about 900 miles southwest of our home in Anchorage. A tour seemed like a good place to start this learning, to discover what we could know and see, condensed in such a short time.

Bobbie likes to say she'll go the extra mile to make sure her tours are interesting. Hence, the name, The Extra Mile Tours. She'll customize the tour to a person's special interest. The two islands that make up Unalaska offer much that is fascinating – unique landscapes with craggy mountains and rolling tundra hills; history related to the rich native Unangan or Aleut culture and Unalaska's World War II involvement; the booming fishing industry – the number one fishing port in the U.S. for seafood landings; rare birding opportunities; and flowers – so many varieties of wild flowers. We were told the flowers cover the landscape as summer approaches.

"I can offer a general tour, an overview, or focus a tour on one specific interest," Bobbie tells us. Since our time in Unalaska is short, we set off on the overview tour.

Near the hotel and airport, on Amaknak Island, we drove by the big Alaska Ship Supply store - boasting hardware, clothing, groceries and liquor – and the modern Safeway. There was the Norwegian Rat Saloon. (We didn't go in.) We went by the Museum of the Aleutians. (We would go there on our third day.)

The hills were dotted with homes painted bright colors, every imaginable color – "to counteract the many grey days," Bobbie commented. There were cargo containers spread out along the Dutch Harbor docks.

From a hillside, we could look down on the docks, and visit a memorial to the Native people, evacuated from the island during what has been labeled "the forgotten war", when Dutch Harbor was bombed during World War II and the Aleuts were stealthily shipped off the islands.

We drove over a short, 500-foot bridge to the bigger island, Unalaska Island, and "downtown". Clustered there are the city hall, the post office, clinic, library, senior center, community center, elementary and high schools, and the swimming pool. There is also the iconic Russian Orthodox Church and the Jesse Lee Home. (I was startled and delighted to see the Jesse Lee Home so intact and well kept. It was founded in 1890 as a home for children. The agency has a continuous history, known today as Alaska Child & Family, based in Anchorage.)

A memorial park stands just outside this downtown area, with flags honoring various branches of the military.

As we toured around in Bobbie's van, I struggled as an artist to pin down names for the unusual landscape colors surrounding us. The closest I could come to naming these early springtime colors was to label the hillsides olive green with swathes of charcoal brown and dusky beige hues, depending on the light. Higher up, there were some isolated patches of tired-looking snow. (I'm told that by summer, the whole landscape will be flooded in emerald green.) There were fleeting spots of bright ochre, almost like spotlights, as the sun made intermittent appearances. Mercifully, our morning introductory fits of rain and blasts of wind had stopped.

From six months to four decades

Our two hours with Bobbie had been focused on the tour, on her sharing information about Dutch Harbor and Unalaska. But as we traveled around, I caught snatches of what life in Unalaska had meant to her personally.

"I love it here," she told us simply, as if underlining "love" with her voice.

"I came here in the late 1970s to work with my dad, who had a job as a cook in fish processing. I came for six months." With a chuckle, she adds, "Obviously I'm still here."

During the several intervening decades between her arrival and now, Bobbie has worked as a school cook, been a janitor, a swimming instructor and swim coach. She has served on the boards of the Convention and Visitors Bureau and on the school board. (That's all I know from our short visiting, but I bet there's more.) She has a son and two small granddaughters on the island. She married an Aleut, now working as a longshoreman. ("See those cranes over there? He's working one of them.") Her husband calls her the local meteorologist, since she's always watching the fickle, changing weather patterns.

They've moved from a module home in a valley to a home on the bay. ("My husband used to call me a Valley Girl. We relocated because he needed to be living right on the water. We rent the module home out now.")

Bobbie admits to us, "I hadn't been much of a reader. Now I'm reading all the time." She names some of the books she's been reading – "Family After All," by Ray Hudson; "Son of the Smoky Sea," by Simeon Oliver, both about the Jesse Lee Home. She picks up all the books she finds on Unalaska, its history, flowers, industry, birds.

"I like doing that. It helps me customize my tours. The learning is good."

It's her 18th year, giving these tours. Will she keep giving them – stay in Unalaska?

"Yes. My husband is close to retirement. We may want to spend more time in Oregon, close to my siblings. But this will be home." 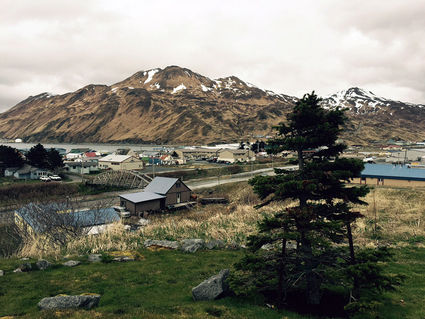 A clump of Sitka Spruce trees sits on a hill above the city. Supposedly the trees were brought to the barren landscape to boost the morale of young soldiers stationed there in what must have seemed a foreign land.

And those tours? "I will keep giving them. People have formed some strange opinions and have heard colorful stories about Unalaska. 'Deadliest Catch', the reality TV show, has done some of that. I want people to really learn about this place, all that is positive about these islands – to really like it here. It's a fascinating, beautiful place."