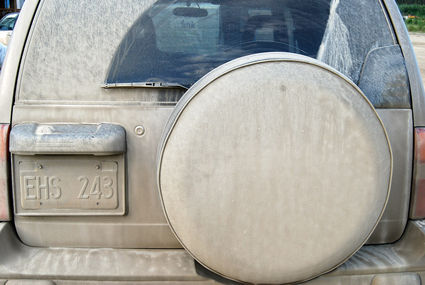 Bragging rights come with completing the Haul Road, and ending up with a car that looks like this.

Summertime means road trips, and no Alaskan can call themselves a true Alaskan if they haven't done the Haul Road.

Yes, you may have done the Alaska Highway to the Lower 48, but it's not so gnarly now as it once was, no longer gravel and mostly paved.

But the Haul Road, also known as the Dalton Highway, is a gravel road - another animal entirely.

Gravel roadways have a decidedly different impact on your vehicle, most notably rocks and huge, thick clouds of dust. So if your windshield sports a signature Last Frontier crack all the way across, you should have no fear as you have already sustained damage. If not and your glass is still intact, well, you're on your way to bragging rights.

Imagine how you'll feel as you cruise back to Anchorage, your car caked in dirt, windshield dinged, and you have an instant junker. Just point it in any direction you want to go and watch traffic part like the Red Sea.

If you take the challenge, follow this one important piece of advice -make sure you have good tires.

Alaska road trips are so simple, just head in the direction you want to go and follow the only road going that way. Head north to Fairbanks, follow the Alyeska Pipeline, and you'll hit Coldfoot, last place for a bite, a bed and fuel for a long way. If you take a room here, make sure you get one away from idling diesel trucks.

The James W. Dalton Highway at 414 mile is one of the most remote roads in the United States. Built in 1974 to support the Alyeska Pipeline, it is named after an engineer, who supervised building of the Distance Early Warning Line or Dew Line – a series of radar towers in Alaska strung across the North Slope and the Aleutians during the Cold War – and who was also involved in early oil exploration.

The beauty of this road is that you travel through the varied ecosystems and geology of Alaska - tundra, pingoes, the breathtaking foothills of the Brooks Range and the Arctic Plain - and get to see animals in the wild like caribou and musk oxen.

Any seasoned Alaskan knows that when you venture to remote areas you bring along a survival kit.

First off, consider carrying jerry cans of gas. My kit always included peanut butter, crackers, water, lots of matches, ax or hatchet, saw, three-hour log, candles or lantern, warm layers of clothing, compass, whistle, mirror, sleeping bag, mattress pad, can of flat fixer, and for good measure and ballast I throw a couple of pallets in the back of the truck.

It snows in the summer in the Arctic, especially in Atigun Pass, so be prepared. Oh, bring a shovel too.

If you have a low-slung vehicle like a Subaru Forester, be careful in deep snow as such cars can high center, hence the need for a shovel.

Do take a photo of yourself in front of the Arctic Circle and the Welcome to the North Slope signs, but sadly there is no longer a last tree sign or the tree itself, as someone killed it.

You'll see remnants of the Hickel Highway, tracks of the equipment he sent up. That marked the tundra. It is said that one footprint on the tundra eventually turns into a lake, and flying across the North Slope with its many lakes and ponds seems to be proof.

Get out and walk the different terrains and stretch your legs, but do not wander too close to the pipeline or Alyeska helicopters will drop out of the sky to ask what you're up to. 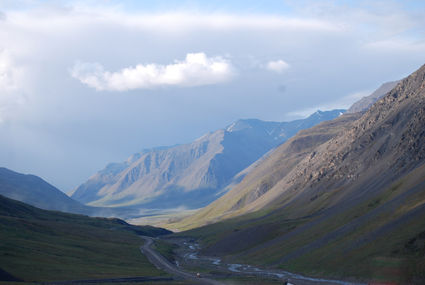 Coming off Atigun Pass to see the foothills of the Brooks Range spread out before you is one of the many awesome sights along the Haul Road.

Be cautious of trucks, as they barrel down the road at a tremendous clip, spewing dust and rocks in their wake. I try to scoot into a pullout and face away from the truck, but if that's not possible I put on my windshield wipers at full and spritz washer fluid hoping rocks will ricochet off. Works sometimes, sometimes not.

I think it's best to travel Alaska in the spring before the mosquitoes hatch and the tourists come. The weather is usually warm and bright, and sometimes those few weeks are the summer.

Also animals are out and about and near the roads until the snow pack melts in the higher elevations. They are not much concerned with your presence.

Bears in particular wander along the road, eating greens. I used to delight visitors to Skagway by telling them that bears do not foul their dens in the winter, but develop a fecal plug that has to be dislodged in the spring by eating fiber and not humans.