Alaska wins battle for statehood in 1958 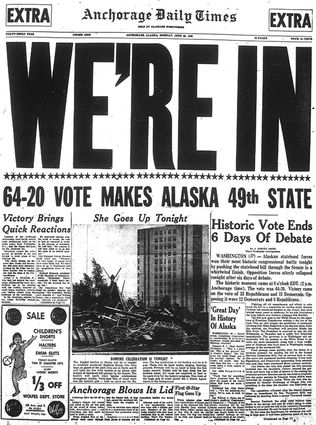 Anchorage Daily Times typesetter and former Alaska Star editor Lee Jordan had to cut a wooden comma to make the apostrophe for this 6-inch tall "We're In" headline on June 30, 1958.

At 2 p.m. on June 30, 1958, teletypes and telephones all across Alaska began buzzing with exciting news. After six days of debate, the U.S. Senate had voted 64-20 to add Alaska as the 49th state. The House of Representatives already had approved its admission by a vote of 210-166 on May 28.

The long battle for statehood was over.

Sirens blared in towns across the territory. Crowds celebrated in the streets. Alaskans had won their 91-year struggle for self-government.

Following the Constitutional Convention of 1955-1956, which drafted a 14,400-word constitution for the new state, and the efforts of duly elected representatives through the Alaska-Tennessee Plan, the push for statehood heated up. U.S. Sens.-elect Ernest Gruening and William A. Egan and Rep.-elect Ralph J. Rivers joined Alaska's non-voting delegate, E.L. "Bob" Bartlett, on Capitol Hill. The men pounded the halls of Congress for two years, working all angles to get the territory admitted.

There were a few turning points that pushed the cause along.

The appointment of sympathetic Nebraska newspaper publisher Fred Seaton as Secretary of the Interior in 1956 helped sway the opinion of the Eisenhower administration toward statehood. Previously, Eisenhower had endorsed splitting Alaska into two states.

Then a young attorney named Ted Stevens arrived on the scene. Already working for the Department of Interior, he became immersed in the statehood issue after C.W. Snedden, publisher of the Fairbanks Daily New-Miner, recommended him to Seaton. Stevens, who became known as "Mr. Alaska," served as coordinator of the Alaska and Hawaii statehood movements with the now pro-statehood Secretary of Interior and helped draft the statehood act.

He was instrumental in getting language in the act that persuaded President Dwight D. Eisenhower to support the bill. Eisenhower, who had seen Alaska's value in the defense of the nation during World War II, wanted to keep control of it for military purposes.

Stevens helped draft a provision to give U.S. presidents military powers in Alaska that they don't have in any other state. Section 10 of the Alaska Statehood Act creates a line down the Porcupine and the Yukon rivers and on down the Kuskokwim River to the ocean. U.S. presidents can control the land north and west of that line for military defense purposes.

Also, by 1957, Southern senators who had previously opposed admitting both Alaska and Hawaii as states because they feared new senators would not be sympathetic to segregation, knew that tide had turned. Anti-segregation forces already had a clear majority.

And the discovery of a large oil field in the Kenai Peninsula that December proved that Alaska probably would be able to carry its own economic weight.

Prior to heading to the House for a vote, an amendment was added that reduced Alaska's land grant from 183 million to 104 million acres – which still was larger than the state of California. This grant gave Alaska the means upon which to build a solid financial foundation through development or selling of its land.

Once the military and land issues had been worked out, the House and Senate passed the statehood bill. The actual statehood act passed on July 7.

But Eisenhower did not sign the official document until Jan. 3, 1959. The six-month delay was due to payment of salaries for the new state's congressional delegation. By law, U.S. senators only can receive paychecks for six years at a time. So if Alaska had been admitted on June 30, it would have caused a financial headache for the payroll people in Washington, D.C., as it would have added months of unauthorized pay to the new senators' paychecks.

And so, for the first time since 1912 when Arizona and New Mexico joined the Union, a new star was added to the U.S. Flag. The 49-star flag only flew for a few months, however, because Hawaii gained statehood on Aug. 21, 1959.