By Sarana Schell
For Senior Voice

Anchorage is celebrating its 100th birthday with theater 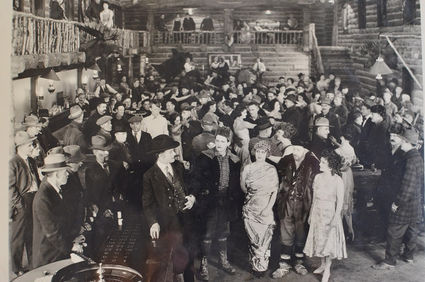 A scene from "The Cheechakos," inside the Anchorage movie studio, 1923.

From a tent city in a U.S. territory, Anchorage has grown to an official All-American City and international hub in the 49th state. Cyrano's Off Center Playhouse is celebrating the phenomenal amount of change with an equally sweeping theater project: 10 plays, one per decade, over 10 weeks. The first show is in the first week of July.

Local residents and their visitors will know the big stops on the timeline from 1915 to 2015 ­– statehood, the Good Friday earthquake, the Trans-Alaska pipeline – but the plays also page back through less-remembered chapters. Anyone remember Cap Lathrop's efforts to turn Anchorage into the Hollywood of the North? The studio he built was on Third Avenue, where the Snow Goose Restaurant is now.

These plays share the characters and behind-the-scenes dealings, from organized crime to major philanthropy, that shaped the town into a city.

Anchorage's history makes entertaining as well as informative theater, populated as it is with real-life Alaska characters like Anchorage madams Gladys Happybottom, who ran her House of Joy, and Zula Swanson, who became known as the "richest black woman in Alaska" by selling land to J.C. Penney. (By the way, did you know women got the vote in Alaska sooner than at the national level?)

Archival film footage will be a big star in the shows, said Cyrano's co-founder Sandy Harper, so some of the story telling will be done in the language of the time.

Harper asked Charles Wohlforth, the Anchorage author commissioned to write "From the Shores of Ship Creek," the official history for the centennial celebration, to act as a history consultant for the shows.

Wohlforth invited a group of Alaska history all-stars to throw out ideas, including settings, characters and music for each of the decades. He said the group ended up with a chart that they gave to the 10 writers, or curators, who are putting together the shows.

"I wanted to make sure the creative folks would be working with real history and not just tired stereotypes or overworked stories," Wohlforth said.

No worries there. A significant part of the charm of this audacious series is that many of the contributors have deep ties to the history they're covering. Harper said she and her husband and Cyrano's co-founder, Jerry Harper, inherited the building that houses the theater from Jerry's step-dad, Zach Loussac, a prominent businessman, mayor and philanthropist, whose name is now on Anchorage's biggest library.

Maia Nolan-Partnow, one of the curators, started with the idea of looking at events from 1975-1985 through the eyes of fictional lawyers, based on the actual people who flooded into Anchorage in the pipeline era and stayed to help build the state. Conveniently, she knows many of them, including her father-in-law.

Catherine Stadem, another curator, auditioned for a director putting on a production in Anchorage in the 1950s. He is now a character in her centennial play. The personal experience can be helpful, she said, and challenging.

"I think the hardest thing when you're writing about real historical figures is walking the fine line between fact and fiction," Stadem said. "I used many, many verbatim quotes, but I also used creative writing techniques to invent dialogue that propels the action."

Like all good theater, the stories the curators have chosen to share have larger themes that continue to inform our lives now.

"The most interesting thing to me in researching the McCarthy Era, also known as the Red Scare," said Stadem, "is the parallel throughout history - even today - of questioning the patriotic loyalty of those who think our nation can do better and should have better policies. Today, that is the tactic the extreme right uses to demonize the liberal left."

The masterminds behind the centennial theater project were still dreaming up ways to enrich the experience for theatergoers when this story went to press. Patrons can count on some kind of audience participation option, and displays in the lobby to share facts that may not fit into the productions.

Can you help tell Anchorage's story? If you have any remembrances or family stories from parents or other relatives that you'd like to share, please send them to Sandy Harper at cyrano@ak.net.