Meeting Alice and the mayor

A visit to Unalaska's senior center 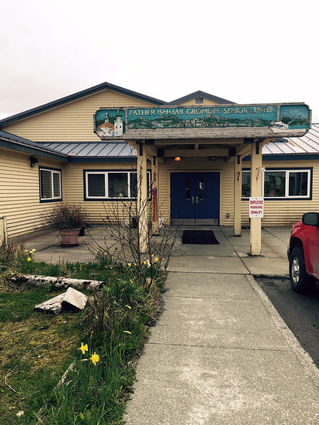 Is it Dutch Harbor or Unalaska? Should it be written Unalaska/Dutch Harbor? I reflected upon this puzzle as our small plane landed on Amaknak Island in the heart of the Aleutian Islands chain.

I soon got my answer from what might be considered the ultimate authority, the mayor of the city of Unalaska.

That was settled. And we learned that the City of Unalaska encompasses all of Amaknak Island, where the airport is located, and the northeastern end of Unalaska Island. (In 1980, the two were connected by a short bridge called the "Bridge to the Other Side".)

So how did we get to meet and visit with the mayor? Being a senior myself, I'd wanted to see the Unalaska senior center, among many other things during me and my husband's stay. It's formally known as the Father Ishmail Gromoff Senior Center and is open weekdays to serve lunch to the community's older residents.

"You're visitors! Come in and have lunch with us!" Someone was coming in the center's door behind us, holding it open, and offering the kind of easy, friendly greeting we experienced wherever we went. "I'm late! The center board is meeting right now – and I'm board president!"

Grinning, she hurried off to sit at the table with the other board members.

It was not until the end of our yummy, three-course lunch that we learned that this outgoing, door-greeting person was the mayor of Unalaska, Shirley Marquardt. She told us she would come visit with us after her meeting.

We had not expected to be luncheon guests of the center. We sat at a long table, simply looking around and eating. This was some fine dining! We'd had a choice of spicy chicken or vegetable beef soups, a salad buffet, several entrees – vegetable pizza, French dip, and of course, a crab dish – followed by a selection of fine desserts. I remember the warm, frosted lemon cake with fondness.

It wasn't long before one of the seniors having lunch, a feisty woman with long, loose white hair, scooted up to visit with us.

"I'm Alice Magone." She was eager to talk with us, to answer any of our questions.

I began, "Are people friendly here?"

"Of course," was her ready response. "You'd have to be a rude prude not to be friendly here, not to get to know the others. People seem to get along, not much back-biting. We'd better. Some of us live right here," she added, explaining that it is a residential center. She told us there's a long waiting list for its 16 HUD units, attached to the dining hall or meeting room.

"It's really nice. I like it here. I have a kitchen and dining area, a living room, my bedroom, even a porch. I love my porch! There are gardens and a greenhouse, the lake and the lawns. In the summer we play croquet on the lawns."

Alice had followed her son to the Aleutians. "He came here in 1951 or '52. The people here then were all Aleuts. It has changed and grown so much since then. A second son came a year later. I've had three sons living here, but one has died. And I've had three grandsons born here."

She kept going. "I came to visit, telling people I'd be back in two weeks. That was eight years ago. My daughter is coming to visit soon. Maybe she'll stay too?" she adds hopefully, laughing.

"One thing I really like about the senior center is that the doors are always open. I played classical piano for many years. I've come over here at 5 a.m. to play the piano," she says, pointing to the piano over by the windows. "I taught English at Portland University; even had a B and B in Talkeetna. But I'm happy this is where I live now."

We have finished our lunch, and Mayor Shirley has finished her board meeting. She plops down to sit with us. I tell her that Alice has shared her impression of Unalaska's people in one word – they are honest.

Shirley continues with her own impressions of Unalaska living. "It's such an easy town to talk about. I think it's so good to live here."

She states proudly that Unalaska really pitches in to support the center and the community's seniors. "The center serves really good, nutritious food." (I could now personally attest to that.) "Three of Unalaska's seafood plants help subsidize the lunch program. UniSea provides the kitchen where the meals are prepared.

"We also provide a transportation service, with funding help from the state and city. A van, from American Seafoods, makes scheduled trips on Mondays and Fridays for our seniors to the post office, bank, Safeway, medical appointments, events at churches.

"The seafood businesses here give as much as possible to the seniors. Their employees come here and volunteer. Young people come off the boats and help serve the lunches, dig us out of the snow in the winter, put in carpeting, work in the greenhouse. We have 70 to 80 people come off the Coast Guard cutters – the Coasties – once a month to volunteer. It's so impressive."

As Shirley gets up to head back to her office, Alice invites us to come with her to see where she lives. We head down a long hallway to her home. It is easy to sense her pride as she opens the door to her spacious rooms and complete kitchen. 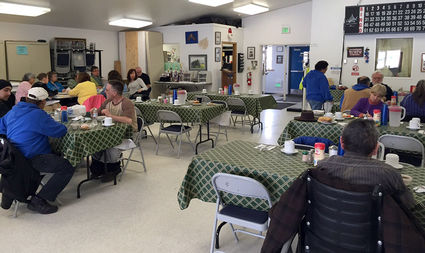 Seniors gather each weekday in the Unalaska facility's dining room for a nutritious three-course meal.

But it is the porch she wants us most to see. She leads us there where we sit visiting, admiring the broad lawn, imagining the flowers that will bloom there in the gardens later that spring, watching the birds swooping over the rippled lake. The grey day has become brighter. The sun is making spotty appearances, casting golden swaths across Unalaska's chocolate brown hills as we talk. I love watching the passing light and drifting shadows. It is easy to sense why Alice has stayed.

Editor's note: This is the second in a series of articles about life in Unalaska/Dutch Harbor, based on Senior Voice contributing writer Dianne Barske's visit in May 2015. The first article appeared in our June 2015 edition here: http://www.seniorvoicealaska.com/story/2015/06/01/people-and-places/a-tour-guide-for-a-place-like-no-other-unalaska/762.html.