By Linda Sharp
For Senior Voice 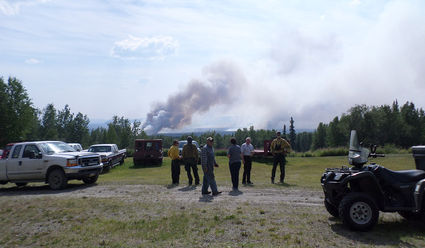 Residents watch wildfires burn in the distance at Moose Pasture, near Manley in interior Alaska. Fires around the state have created hardship for many, while other areas have been able to maintain normal routines despite the conditions.

270 fires have been identified around Alaska this season, with about 27 of the fires worked by firefighters. The degree of challenge and loss Alaskan seniors have experienced is as varied as our geography.

The Kenai Keys subdivision area near Sterling was heavily affected by fires, including many seniors being evacuated from their homes, according to Sandy Clark-Bailey at the Sterling Senior Center. The center offered a place to hang out, she said, and the Sterling Community Center offered temporary shelter.

Many seniors were quite shaken, including herself, Sandy said. The July Fourth parade was a turning point and served as a gathering for those affected by the fires. The community had music and American flags as they marched through the streets in the Kenai Keys subdivision in celebration for surviving the fires.

Cooper Landing didn't have as serious a challenge as the Kenai Keys. Mona Painter, Cooper Landing Senior Citizens' administrative assistant, said that one family in the area was moved out by their children as a measure of caution. But generally there was no panic, everyone acted rationally, Painter said. Boat launching continued very smoothly without exception.

Nenana Senior Center Director Vickie Moyle reported her area was able to 'roll with the flow', with their daily schedules and activities uninterrupted. Elders who have COPD stayed inside. Local EMTs stopped regularly at the center and homes to check on seniors who might have breathing problems. Moyle said Fairbanks had less smoke in the air, and the Nenana center makes a weekly trip to Fairbanks for activities. Moyle said her center might vary the day their bus went into Fairbanks to avoid the smoke, but that would be the only change for Nenana.

In late July, the Fairbanks Senior Center said there had been no smoke for some time. Administrative Assistant Laura Saunders said June had some smoky air and at its worst, visibility was down to just a half mile in some parts of the area. She said all center activities continued as scheduled, even at the peak of the bad air.

Dottie Dallas, 91, who moved to Fairbanks in 1974 and has spent the majority of summers there ever since, said the smoke has been minor this year, from her point of view. She recalled years that warnings to all area residents recommended no outdoor activity for anyone. This year, she found all normal activities occurring.

Santa's Senior Center in North Pole had a lot of smoke. Breathing discomfort was reported, many seniors wore masks and others just stayed home, according to Sharon Geese, the center's administrative assistant. The center kept windows and screen doors closed, all meals were served inside instead of the patios, but otherwise, activities continued as normal, she said.

Eureka, a rural area north of Manley, reportedly had a crew with more than 100 firefighters, a helicopter and an F-27 aircraft, along with contracted locals such as Art Schlessigner, who owns a D-7, for specialized work in controlling and preventing the spread of fires.

John and Ann Shilling who have mined in the area for many decades and maintain their primary residence at Moose Pasture in the Eureka area, said they had firefighters at their property daily for weeks. Ann is known for her baking and hospitality talent and they often had a dozen firefighters stop in daily for a visit about the fires, and a fresh doughnut and cup of coffee.

From Shilling's front yard one could watch the smoke of the fires in the distance. Few if any of the fighters were Alaskans, rather there were many from Montana, Idaho, California and as far away as New England states.

The Shillings report that no one in the Eureka area, nor the mushers across the highway and to the east, lost any structures.

Houston reported little fire effects in their area, but Willow had evacuations and many worries. Willow was hit hard, and even those who bore no personal loss felt the loss of others and the threat to their own.

Dorothea Taylor and George Murphy, long-time residents on Long Lake, hosted a garden potluck early in July, where residents conversed about the fires, worrying about the 'lull' in July that could increase back to June levels. They spoke of the stress of the worry, including smoldering that can't be extinguished and could ignite another major fire.

Supplies to take with you if you need to evacuate

The American Red Cross recommends having the following items ready, should there be wildfire hazard in your area:

• Water: one gallon per person, per day (3-day supply) 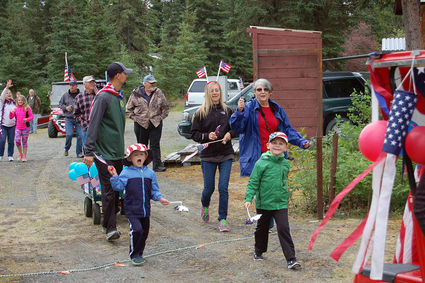 Families in the Kenai Keys subdivision in the Sterling area gathered for an impromptu Fourth of July parade, marching through the neighborhood streets and waving flags to celebrate surviving the area's battle with an intense wildfire.