A welcoming home for generations 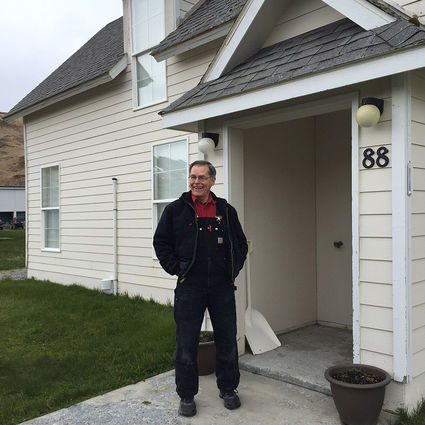 Coe Whittern stands in the entrance of the Jesse Lee Home in Unalaska. Originally built in 1890 to house orphaned youth, Whittern and his wife, Phyllis, spent years restoring the home and now live there, along with many artifacts they preserve as an informal museum.

Editor's note: This is the final story in a three-part series about Unalaska/Dutch harbor, based on Senior Voice contributing writer Dianne Barske's visit in May 2015.

I was astonished. The Jesse Lee Home in Unalaska was there before me, fully intact – a modest, well-kept home standing on a broad, open lawn with mountains rising behind.

I hadn't expected that. Knowing that I would be traveling to Unalaska and Dutch Harbor this past May, I'd been asked by staff at Alaska Child & Family in Anchorage to find the Home on the Aleutian island. The agency, with its mission of caring for children to this day, traces its roots back 125 years to its founding as the Jesse Lee Home.

"Will I find anything still there?" I'd asked, knowing that the Home had been built in 1890. Perhaps all that would remain after all those years of rough weather and wild storms might be a plaque or monument?

There was indeed a monument on the corner of the lot. Made of brown marble, its engraving read, "Original site – Jesse Lee Memorial Home, 1890 – 1925." But the two-story, neat, white house with its sharply pitched roof was very real.

As my husband and I were walking around the home, I found myself wondering what stories it could tell us, tales of the children who had been in its care. Until 1925, when the mission moved to Seward, this home had housed and educated hundreds of children, many of them Alaskan Native who had lost their families in the 1890 epidemic that devastated Alaskan villages. Who might live in it today, taking such good care of it?

I was taking photos, lost in thought, when a car pulled up. "Are you interested in this house?" a man asked, striding toward us on the lawn.

It was one of life's more fortuitous moments. He was Coe Whittern, who now lives in the house with his wife Phyllis. He had come home for the noon lunch hour, a break from his job as owner of Unalaska's True Value Hardware store. Once I'd explained our presence, Coe was delightfully willing to answer questions about his home and its history.

"Why don't you come in?" he welcomed us. "I don't have much time before I need to be back at work, but I'll show you around."

Thus began our unexpected tour of this historic place, its carefully restored and invitingly decorated rooms full of history. As we wandered from room to room, Coe shared some of this background, not all of it pleasant or pretty.

The agency, Jesse Lee Home, had moved to Seward in 1925, with the hopes of serving more Alaskan children. The building in Unalaska had then become a mission house, often in search of missionaries to serve this far-away place.

Coe's family story in the house begins in 1949. His father, Charles Keith, had come there as a Methodist pastor when Coe was just three-years old. Coe's older brother, Charles, and mother, Helen, made up the family at that time, joined eventually by younger brother, Quentin, born in 1952, and foster sister, Persenia, an Aleut, taken into the family as a baby. They would live in the house with the Bering Sea at their doorstep for eight years.

On October 1, 1957, the sea claimed the lives of Coe's father and little brother, drowning off the beach in front of their home when their skiff overturned. Coe was 11. His mother moved the family to Michigan following this tragedy.

"It was a very rough time," Coe confides. "We were gone from Unalaska in just a couple of weeks.

"I lived in Michigan from 1957 to 1968, all through junior and senior high school and college. When I graduated in 1968, I knew I wanted to come back to Unalaska."

Asked what brought him back, Coe responds simply, "I wanted to come home. I didn't really process it, beyond coming home. I'd come up here in the summer of 1968 as a surveyor. I wanted a high school teaching job in Unalaska but there weren't any in '68. The community wasn't big enough for a high school yet."

In 1969, he married back in Michigan and brought his wife, Phyllis to Unalaska, first driving up the highway. "I told her, 'If you don't like it there, you don't have to stay – but if you don't stay, you are not the lady for me.'"

He pauses to reflect on those words, before adding with a laugh, "You don't know how many times I've regretted those words over the years. Now it's home in her heart as well as in mine. We've raised our three children here in this house, and all three have found their spouses here."

Thus, in 1969, Phyllis and Coe began the first stages of remodeling the house, initially simply trying to make it livable. "It was certainly not a mission house when we came here. It was empty, vandalized, derelict. It had been broken into several times and squatters had moved in. It was called the Snake Pit, known for prostitution, occult practices and drug use."

Coe had looked into buying the house and surrounding land back in 1968. "I'd stopped in the Anchorage offices of the Methodist Superintendent and told him the house was a total mess. I told him you need to do better. He said he didn't know how to do that – 'make me an offer,' he said. I bought it. Really, I bought the land. The house was so bad, it was a net zero."

Phyllis and Coe moved into a rental house and went to work. "We've done lots of work over the years since then, beginning with a rotting foundation. It was a colossal effort," Coe states. "Our watershed year was 2001. We looked at where we were and decided we'd either give up the house or get serious, truly restore it. Over the years, we'd taken turns wanting to simply tear it down."

From what we were seeing on our lunch hour tour was a beautifully renovated home. We wandered from front hall to living room and dining room, into the modern kitchen, in a space that had served as the medical office of Dr. Albert Newhall when he was the superintendent of the Jesse Lee Home from 1985 to 1925. Upstairs we saw several bedrooms, once shared by the many mission children sleeping there, now attractively refinished and decorated for single-family use.

Coe stopped the tour. "I know I have to get back to work, but you have to see the attic." OK, my husband and I thought, not knowing what to expect up there. 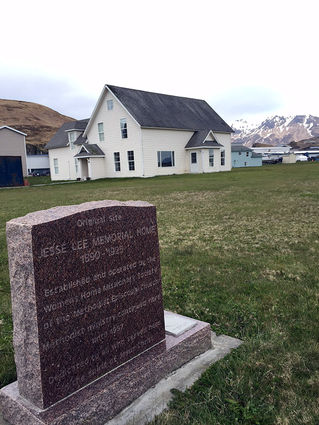 The current Jesse Lee Home in Unalaska, with a memorial marker.

We found the attic just as it must have been when all the children lived in the home around 1890 or 1900. The slanted, bare wood walls were lined with cubby holes, sectioned spaces used by the children to store their few possessions. Names of the children were typed on paper labels and tacked or taped above each cubby to show the space for their things. Above one, easily readable, was "Bennie Bensen", the creator of the Alaska flag design while he was a Jesse Lee Home resident, first in Unalaska and then in Seward after the agency move.

Coe has created something of an attic museum – mission children's old toys, tools, games, dishes, items of clothing – perhaps one hundred years old or older. He's put them out on shelves or beams as a display.

"I like doing this, finding these things as we've restored the home, and keeping them this way as a tribute to the home's history."

How much it meant to us, my husband and me, that chance brought this opportunity to see the Jesse Lee Home, standing intact with its proud history and proud owner. And how grateful we are that Coe and Phyllis Whittern decided to restore it with such effort and care.