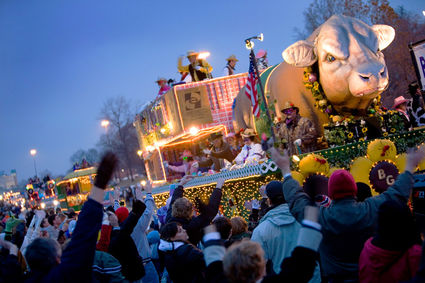 The Centaur Parade is a fixture in Shreveport's enormously popular Mardi Gras celebration. The festivities are family and visitor-friendly and draw hundreds of thousands of people.

Located in the northwestern corner of the state, Shreveport-Bossier is the third-largest community in Louisiana. Home to a thriving nightlife and entertainment scene, a year-round calendar of festivals and cultural events, a burgeoning culinary scene and opportunities to explore the great outdoors, Shreveport-Bossier is a destination where there's always something new to experience.

Culturally, Shreveport-Bossier serves as a crossroads where the Cajun and Creole traditions of Louisiana blend with the wide-open spirit of Texas. This unique combination of two great American heritages can be tasted in the food, where Texas-style barbecue often shares a plate with traditional Louisiana favorites like gumbo, po-boys and crawfish etouffee. It can also be heard in the music pouring out of local nightclubs, where jazz and soul share the stage with blues, country, rock and zydeco. Local festivals, which celebrate everything from crawfish to black history, provide year-round opportunities to become immersed in the fascinating blend of cultures that exists in Shreveport-Bossier.

Music history enthusiasts will find much to explore in Shreveport-Bossier. A National Historic Landmark situated in downtown Shreveport, Shreveport Municipal Auditorium was home to the legendary Louisiana Hayride radio broadcast from 1948 to 1960. Elvis Presley made his performance debut onstage at the Louisiana Hayride on Oct. 16, 1954. Today, a statue of Presley stands outside of the auditorium on Elvis Presley Boulevard and visitors from around the world make the trek to Shreveport Municipal Auditorium to tour the building.

Blues legend Huddie "Lead Belly" Ledbetter was born and raised in Mooringsport, La., just outside of Shreveport, and his gravesite at Shiloh Baptist Church Cemetery in Mooringsport is a frequent destination for blues aficionados.

Shreveport-Bossier's six riverboat casinos and live horseracing track lend 24-hour excitement to the city's entertainment offerings. Margaritaville Resort Casino, which opened in June of 2013, is the most recent addition to Shreveport-Bossier's gaming scene. With a 30,000-square-foot casino featuring more than 1,300 slot machines and 54 table games, Margaritaville's trademark "It's 5 O'Clock Somewhere" Bar, and a variety of restaurants including riverfront fine dining at Jimmy's Steak and Seafood, Margaritaville Resort Casino has quickly established itself as a popular destination among visitors and locals alike.

Many of Shreveport-Bossier's casinos are centrally located in downtown Shreveport and Bossier City, along the riverfront. Located just south of the Louisiana Boardwalk Outlets on the banks of the Red River, Horseshoe Casino and Hotel is another popular gaming destination. It is home to the Horseshoe Riverdome, one of Shreveport-Bossier's hottest live music venues. Legendary performers like Willie Nelson, Smokey Robinson, The Beach Boys and Diana Ross have recently brought their world tours to the Horseshoe Riverdome.

Enjoying the great outdoors can take many forms in Shreveport-Bossier, from a relaxing trip down the Red River aboard the Spirit of the Red River Cruise to zip-lining through a swamp filled with live alligators at Gators and Friends Alligator Park and Exotic Zoo. One of Louisiana's top bird-watching destinations, the Red River National Wildlife Refuge in Bossier City, features a 6.5-mile network of hiking trails, a lake for fishing and an interpretive center offering interactive educational programs for all ages.

Those who love to hike, bike or jog should make time to enjoy the scenic riverfront biking and jogging paths that wind their way along Clyde Fant Parkway in downtown Shreveport and Arthur Ray Teague Parkway in Bossier City.

For those who enjoy traveling "off of the beaten path," Shreveport-Bossier is a great entry point from which to travel along Louisiana's Boom or Bust Byway, a scenic byway that winds its way through historic rural communities like Oil City, Plain Dealing and Homer.

A special audiovisual tour has been created to help visitors appreciate all of the history found along the Boom or Bust Byway. Smartphone users can download the GPS-driven tour by searching for the free "N LA Byways" app in iTunes or Google Play. Travelers can also check out a handheld device at the Shreveport-Bossier Convention and Tourist Bureau at 629 Spring Street in downtown Shreveport.

Several Shreveport-Bossier eateries are among the best-known in Louisiana. Strawn's Eat Shop, a mom and pop diner with celebrated ice box pies, has been featured in Southern Living magazine on numerous occasions. Herby-K's, a popular local seafood restaurant, has earned rave reviews in numerous national publications and was included in Garden & Gun magazine's list "100 Southern Foods You Absolutely, Positively Must Try Before You Die."

The Wall Street Journal has listed Bossier City's Silver Star Smokehouse among the best barbecue in the United States.

Known as "the biggest free party on Earth," Mardi Gras is often associated with New Orleans. However, Carnival season – with its parades, parties and costumed balls – is huge in Shreveport-Bossier.

A study conducted by Destination Exploration estimated that a combined total of more than 283,120 people attended Shreveport-Bossier's two largest Mardi Gras parades – the Krewe of Centaur and Krewe of Gemini parades – in 2014.

A calendar full of events

As Carnival season draws to a close, a busy calendar of major festivals commences in early spring.

Holiday in Dixie, one of the oldest annual festivals in the U.S., celebrates the arrival of spring with a carnival, live music and more. Held each year in mid-April, Holiday in Dixie takes place in downtown Shreveport's Festival Plaza. Holiday in Dixie concludes with the Ark-La-Tex Ambassadors BBQ Cook-Off, a competitive barbecue event that attracts many of the top barbecue teams in the South. Barbecue lovers can enjoy live music while sampling outstanding barbecue and voting for the winners of top prizes.

Each Memorial Day Weekend, the sounds of zydeco music and the scent of boiling crawfish drift through the air in downtown Shreveport as the Mudbug Madness Festival brings four days of music, food and fun to Festival Plaza. Named one of the "Top 100 Events in North America" by the American Bus Association, this festival includes outstanding Louisiana cuisine, three stages of live music, kid's activities and more. More than 80,000 pounds of boiled crawfish are consumed by Mudbug Madness attendees each year. The 2015 Mudbug Madness Festival is scheduled for May 21-24.

One of most anticipated events each June is the Let the Good Times Roll Festival, a celebration of black history and culture that features old-school, gospel, R&B and funk music as well as an outstanding array of food vendors, art booths and more. The Let the Good Times Roll Festival, which will be held, June 19-21, raises funds for local scholarship programs. The event was named a "Top 20 Event" by the Southeast Tourism Society in 2014.

The arrival of summer means that local farmers' markets will open, and Shreveport-Bossier boasts some of the largest and most popular farmers' markets in Louisiana. The enormous Shreveport Farmers' Market, open Saturdays and Tuesdays, June through August, includes hundreds of vendors selling farm-fresh produce, locally made arts and crafts and ready-to-eat artisan foods in Festival Plaza. Live music, cooking demonstrations and more add to the excitement.

The all-new Benton Farmers' Market, which debuted in 2014, is a huge market that takes place each Sunday afternoon in June and July in downtown Benton. With a playground and rides for children and an uncommon variety of kid-friendly food vendors, the Benton Farmers' Market is especially family-friendly. 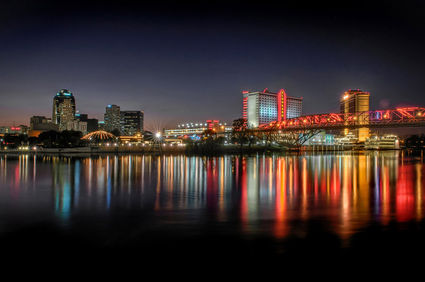 Lights from the Shreveport skyline reflect on the Red River. "Louisiana's Other Side" describes the area's location in the state and its unique combination of Louisiana Cajun and Creole culture and Texas cowboy heritage.

One of Shreveport-Bossier's best-known holiday events is Christmas in Roseland, a holiday lights extravaganza at the Gardens of the American Rose Center, Nov. 27-Dec. 23. Other popular events include the Christmas on Caddo Fireworks Festival, a charming, small-town Christmas festival featuring fireworks over scenic Caddo Lake, Dec. 5, and Les Boutiques de Noel, a weekend-long holiday shopping extravaganza at the Bossier Civic Center, Nov. 19-21.

Chris Jay is the Public Relations Manager of the Shreveport-Bossier Convention and Tourist Bureau.