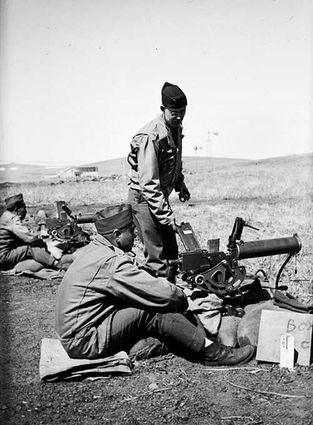 Many of those who came to Alaska during World War II liked what they saw and decided to set down roots in the Last Frontier. Among them was a true visionary who created one of Anchorage's premier recreational facilities, organized the Alaska Territorial Guard and built the first subdivision in the town once known as "Ship Creek."

Born in Tyler, Washington, in 1890, Marvin "Muktuk" Marston found himself mining copper and gold from the bush country of Northern Ontario and Quebec in the late 1930s. But when the Japanese attacked Pearl Harbor on Dec. 7, 1941, he raced to Washington, D.C., to offer officials a radical idea.

Marston, who'd also spent time in Nome, proposed a plan to safeguard the nation's remaining aircraft in underground storage facilities. The Pentagon turned down his creative proposal but did see the value of his knowledge of northern terrain and weather conditions.

In March 1941, it offered him a major's commission and sent him to Anchorage to be a morale officer for the new base at Fort Richardson and Elmendorf Airfield. The long, dark days of Alaska winters led to one of his first missions – a snowy recreation area.

Marston rounded up a crew of avid outdoorsmen, searched the area surrounding the Anchorage bowl and settled on an open slope valley high in the Chugach Mountains behind town for a ski development. He and the U.S. Army erected the first rope tows at what's now known as Alpenglow Arctic Valley ski area.

He continued his morale-boosting plans with a tour to military posts with comedian Joe. E. Brown. While on this trip, Marston noticed that Western Alaska lacked defenses against an enemy invasion after visiting St. Lawrence Island. He noted all the white men, except for a schoolteacher, had left and that the 700 Natives living in the island's two villages of Savoonga and Gambell were nervous about possible occupation by Japanese forces.

And after Marston learned that a crew from a Japanese vessel had recently come ashore and spent several days on the island, he thought about setting up defense units comprised of Alaska Natives throughout western Alaska that could watch for enemy activity along the territory's seaboard.

But his idea to build a Native guerrilla army to guard the coast didn't muster much support until the Japanese bombed Dutch Harbor in 1942. Then Gov. Ernest Gruening, who'd already established citizen militias, recognized Marston as a kindred spirit and enlisted his help to organize the Alaska Territorial Guard.

While traveling to villages recruiting for the new guard, Marston earned his Eskimo name "Muktuk." He beat a village chief in a raw whale blubber-eating contest.

Marston also earned the respect of Alaska's first people. In just a few months, he organized 111 units and personally supplied many of them with rifles and ammunition by driving to their remote locations by dog team.

After the war ended, Marston remained in Alaska and spent the rest of his life helping to build a better civilian life in Anchorage. In 1952, he and Ken Kadow built the community's first subdivision, Turnagain-By-The-Sea, with a water system and paved streets to serve 150 homes. He also served as a delegate to the Constitutional Convention in 1955 and strongly advocated for Native rights.

Unfortunately, the subdivision and its homes suffered massive damage during the Good Friday Earthquake in March 1964 when much of the bluff upon which it sat collapsed into Cook Inlet.

Upon his death in 1980, at 90, Gov. William A. Egan called Marston "a human dynamo who dared to disturb the status quo."