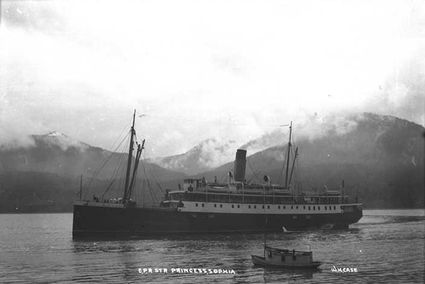 Canadian steamship Princess Sophia plied the waters of Southeast Alaska from 1912 until sinking in 1918.

One of the last ships scheduled to leave Southeast Alaska in the fall of 1918 met with disaster only a few days into her voyage. On October 23, Canadian Pacific Railway steamship Princess Sophia pulled out of the port at Skagway around 10 p.m. and headed into the Lynn Canal bound for Vancouver.

The 245-foot Scottish-built ship was filled with 350 Klondikers, families and others heading south for the winter. The steamship company, in an effort to hold more passengers for the voyage, had converted the Sophia so she could carry 100 more passengers than normal.

About four hours out of Skagway, Capt. Leonard Locke ran into a north wind that began pushing the Sophia southward. The weather worsened. A blinding snowstorm ensued.

By 2 a.m. on October 24, the Sophia steamed into an area known as Vanderbilt Reef. Unbeknownst to Locke, a navigation error had placed the ship two miles off course.

The bow lifted out of the low water and ground onto the rocky reef.

The captain telegraphed company officials in Juneau and Skagway, who, in turn, dispatched ships to help.

At daylight, crewmembers assessed the damage. After a careful inspection, they determined that the ship had not suffered any significant damage and that its double-hulled bottom was holding.

Several ships arrived on scene during the morning but were unable to assist due to the heavy seas. Locke would not let his passengers off the stranded vessel until the fierce gales quieted. He was afraid that if he lowered the lifeboats, they would be smashed to bits on the rocky reef below.

Skippers of the vessels waiting to rescue the passengers estimated the wind was whipping about 100 mph and the seas were rising more than 30 feet. A sharp drop in barometric pressure as far away as Sitka signaled a major storm.

Observers on both October 24 and 25 noted that passengers and crew came out on deck, boats were swung out, but ultimately nothing was done. Witnesses said they assumed that Locke was waiting for the weather to calm down before he began an evacuation.

But on the afternoon of October 25, the storm worsened and the rescue ships standing by had to seek shelter in high seas, in a near-zero visibility blizzard.

At 4:50 p.m., David Robinson, the Sophia's 20-year-old wireless man, radioed to anyone listening that the ship was in trouble and the people on board needed immediate assistance.

Then, about 40 hours after she settled on the rocks, the sea picked up Sophia's stern and turned her 180 degrees, slipping her off the reef – tearing her bottom out as she went – and eventually covering her in the frigid sea.

Divers later discovered that during the sinking her boiler had exploded, severely damaging her superstructure. Close to 100 people were trapped below decks as the ship sank.

The other 250 passengers who floated free died quickly of exposure or from the effects of ingesting fuel oil. For several weeks, bodies were recovered for miles up and down Lynn Canal. And few died from drowning, according to the inquest that followed.

The only survivor of the Princess Sophia disaster was a small English setter that swam to Auke Bay, 12 miles from the ship, and was recovered a few days later covered in oil.

The sinking of the Princess Sophia devastated Dawson City, as many of its professionals and business people were on board the ill-fated steamer. It also was reported that $1 million in gold was in her hold.

One Alaska hero also lost his life. Walter Harper, the first person to summit Denali in 1913, and his wife, Frances Wells Harper, both perished in the accident. The couple, married six weeks before, were on their honeymoon to the Lower 48.