Weatherization improves your home and budget 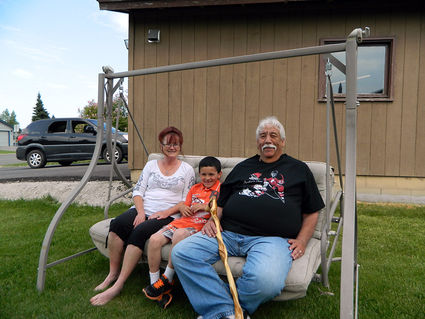 The Iveys relax outside their Anchorage home, which was repaired and upgraded inside and out through RurAL CAP's weatherization program. Last year, RurAL CAP weatherized 567 homes in 11 Alaska communities and the weatherization department also completed 35 home modifications for people with disabilities.

In 2013, RurAL CAP weatherized the home of Lucky and Amy Ivey in Anchorage. They received a new furnace, hot water heater, a sump pump, smoke and carbon monoxide detectors, vent for their kitchen stove. Their attic, doors, windows and pipes were re-insulated. Their gutters were repaired, they received more energy efficient light bulbs. The Iveys estimate they saved about $140 per month on heating and electricity costs after their home was weatherized.

Rhonda McBride of KTVA Channel 11 interviewed the Iveys in a story about weatherization in 2013. In her report, McBride said, "Usually those who can least afford the high cost of energy can least afford to make improvements on their home. But, RurAL CAP's weatherization program has made a big difference in one couple's life, helping them to save on heat and electricity and leaving them with a little more cash to make ends meet."

Lucky and Amy shared their challenge of choosing to heat their home or buy medication. Lucky said, "There were times when I went without medicine, and it was just something you have to do."

Amy was grateful to be able to spend less on heat and more on medication.

"Last winter, because our heat wasn't working well, I used the oven to heat the house, which I know is a 'no'," said Amy. 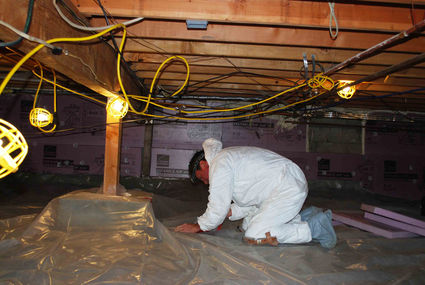 A RurAL CAP weatherization crew member works in the Ivey's home. The improvements result in a warmer and safer house, lower heating costs and more money in the budget for other living expenses.

Lucky has asthma. With a new sump pump, moisture is not building up in their home any more. Mold was a worry in their home with the moisture build-up. The new fan over their stove also helps keeps moisture out of the home. Lucky's asthma improved after the changes were made in the home.

Their story is all too common for low-income Alaskans. By making homes more energy-efficient, families spend less for heating, freeing up more household income for other basic necessities, expenditures which help support the local economy.

In 2014, RurAL CAP weatherized 567 homes in 11 communities and provided employment for 151 rural residents. The weatherization department also completed 35 home modifications for people with disabilities. More than 10,000 homes have been weatherized statewide since 1975.

Angela Gonzalez is the communications coordinator for RurAL CAP.