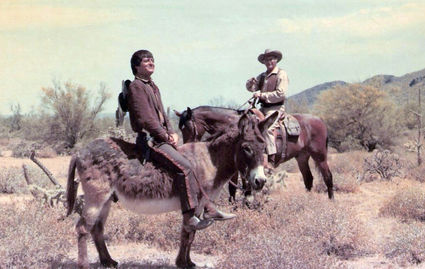 Henry Darrow rides a the burro, with Leif Erickson on the horse in the background, in the "For What We Are About to Receive" Thanksgiving episode of High Chaparral.

Darrow, who turned 82 in September, played Manolito in the popular 60s western television series "High Chaparral." He recalls the memorable Thanksgiving episode, "For What We Are About to Receive," first broadcast on NBC on November 29, 1968.

"We spent that episode looking for a lost turkey that I'd won in a shooting contest," said Darrow, from his home in North Carolina. "The bird falls off my wagon and in one scene we're all out in the desert making various turkey sounds trying to catch it. That was a fun episode."

Earlier in the plot, Manolito's buckboard holding the turkey is stolen, forcing him to seek alternative transportation.

"A burro!" recalled Darrow, laughing. "I can still picture myself riding that animal – it was very boney and uncomfortable."

Darrow appeared in all 98 "High Chaparral" episodes, as well as over 130 film and television roles, many discussed in his 2012 autobiography, "Henry Darrow: Lightning in the Bottle," co-written with Jan Pippins (see http://www.henrydarrowbook.com).

"High Chaparral" was one of numerous TV westerns dominating network television in the 60s.

"About 15 of the top 20 shows were westerns," said Darrow. But the series stood out with its realistic treatment of life and conflict in the old West. "It was also the first show to feature a Hispanic family alongside an Anglo family in primetime."

The show was created by "Bonanza" producer David Dortort, who was looking for a Hispanic actor to play Manolito.

"I got lucky when he saw me in a play," said Darrow, whose parents were from Puerto Rico although he was actually born in Manhattan.

Darrow was a teenager when his family returned to Puerto Rico, where he studied at the university before heading back to the U.S to take up acting.

"As a kid in Puerto Rico, I'd get out of school and go down to a small, local theater and for a quarter could see all the great cowboy stars like Charlie Starrett (the Durango Kid), Buck Jones, Gene Autry and Roy Rogers," he recalled. "Then, as a young adult, I got to play one on TV!"

Darrow says he wanted Manolito to have his own easygoing personality, but also drew on previous stage work.

"I styled him after two Shakespearian characters I played: Mercutio from Romeo and Juliet, which added a comedic touch, and Iago from Othello, which mixed a little darkness to the character. He was a free spirit."

"Cam (Mitchell) was quite a character," said Darrow. "He introduced me to horse and dog racing, and poker, but I learned a lot from watching him and his inventiveness on the set."

During summer shooting on location, Darrow says ground temperatures could exceed 120 degrees. "If you got knocked down during a fight scene and brushed your skin against a rock out in the sun, it would burn you." 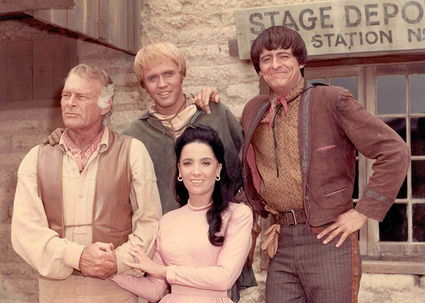 Despite the heat, Darrow remembers Mitchell usually dressed in black. "Cam would jump into the horse troughs when it was hot and after dripping a bit when he got out, you couldn't tell his black shirt and pants were wet. Very smart."

Planning for the final banquet scene of the Thanksgiving episode, after a turkey is finally caught and cooked, Darrow remembers Mitchell saying he would serve the peas, leaving the mashed potatoes for Darrow.

"But Cam grabbed the potatoes," laughed Darrow. "He was always doing something unexpected."

The meal was also interrupted by neighbors and local Indians, each claiming ownership of the turkey.

"Instead of fighting, we ended up sharing the meal," explained Darrow. "It was like the first Thanksgiving all over again – a wonderfully written episode for the season."