'Women of Lockerbie' dramatizes a journey through grief, love 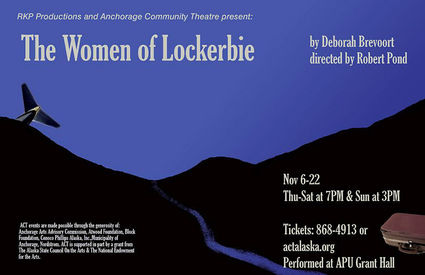 "The Women of Lockerbie" will be performed at APU Grant Hall in Anchorage, Nov. 6-22

How do we deal with our grief over loss of loved ones and all the madness in today's world? In 1988 a Pan American flight over Lockerbie, Scotland was bombed out of the sky. In the play, "Women of Lockerbie," the women of Lockerbie are fighting with the U.S. government for the right to obtain the clothing of the victims of flight 103, which crashed over their village. By washing the clothes found in the wreckage and returning them to the families of the victims of the crash the women believe they can convert an act of hatred into an act of love.

An American mother they meet on the seventh anniversary of the act of terrorism roams the hills hoping to find some remains of her son. Her husband tries to assuage her grief.

This award winning play about a journey through grief, hatred and love has been produced all over the U.S. and has been translated into seven languages.

For tickets or information, call 868-4913 or visit actalaska.org.