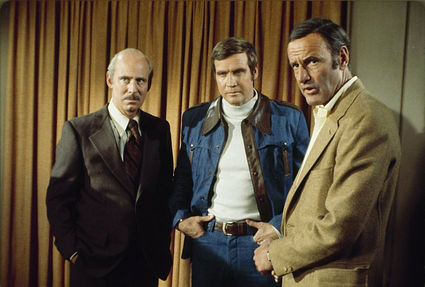 Alan Oppenheimer, Lee Majors and Richard Anderson, as Oscar Goldman, in the 1970s TV series "The Six Million Dollar Man". Anderson continued his Oscar Goldman role in three seasons of "The Bionic Woman," becoming one of the few actors to portray the same character in different television series.

Richard Anderson appeared in over 200 films and TV shows throughout his career. But it's not just his well-known role as security chief Oscar Goldman in "The Six Million Dollar Man" that elicits fan questions on the classic film/television convention circuit.

"They always ask about 'Curse of the Faceless Man,' which we made in 1958 and was my first lead film role," said Anderson from Los Angeles. "It was a low-budget remake of 'The Mummy' two decades earlier, featuring a stone monster rather than one wrapped in bandages. I really just learned my lines and tried not to bump into the furniture."

"That was the last of two dozen movies I did for MGM," he said. "Sci-fi feature films were rather new in 1956 and it changed the genre forever. The whole movie was shot on one stage and as filming progressed, the studio gave us more money and the best production staff. We turned out a first-class movie that's still impressive today."

Born in New Jersey and raised in New York, young Dick and his brother Bob were weekend matinee regulars at the 96th Street Motion Picture Theater, absorbed in their favorite films: westerns.

"The stories had heroes and happy endings – I really wanted to live in that world," recalled Anderson, who outlined his career in the 2015 autobiography "Richard Anderson: At Last ... A Memoir, From the Golden Years of M-G-M to The Six Million Dollar Man to Now," co-written with Alan Doshna (see http://www.bionik.com).

But Richard wasn't the only celebrity in his family.

"Katharine, my second wife, was the daughter of Norma Shearer and MGM producer Irving Thalberg."

Richard and Katharine were married in 1961, so he never knew Thalberg, who died in 1936, but says he was close to his mother-in-law.

"Norma Shearer was very nice to me, she liked and respected me," he said. "She gave us a party when we were married – Judy Garland was one of the guests. Norma had a house on the beach and when we visited her she would talk about her career and how she 'had it all' at one time."

While Shearer found fame in film and retired just as television was coming of age in the early 40s, it was TV that made Anderson a household name when "The Six Million Man" exploded on the small screen in 1974 for five seasons. 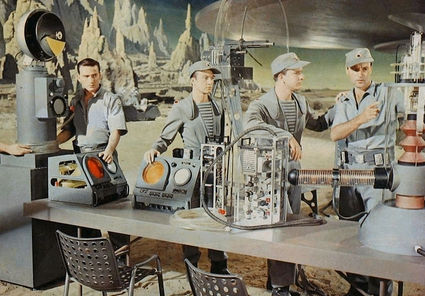 "It was a show that brought back the hero and happy endings, so I told my agent I wanted the part even if I had to pay the producers to let me do it!" laughed Anderson, who also narrated the show's famous introduction.

"'Gentlemen, we can rebuild him, we have the technology,'" he quoted. "You can't imagine how many fans come up to me and say that. It's the best TV show introduction ever written."

Anderson continued his Oscar Goldman role in three seasons of "The Bionic Woman," becoming one of the few actors to portray the same character in different television series.

As to why he took so long to write a book about his life, "My answer is simple," says Anderson, who turned 89 in August. "I'm still living it."