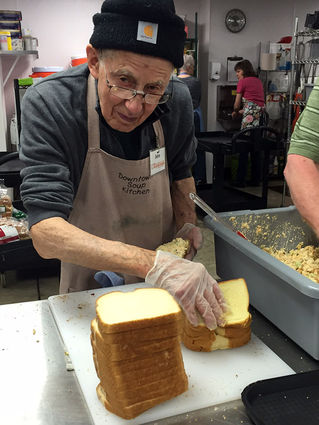 John Sterner helps assemble sandwiches at the Anchorage Downtown Soup Kitchen. He'll be 95 years old in a few weeks, he says. "I hope to be of service until I'm 100."

Vicki Martin calls them the "Thursday people," and I had come specifically to meet one of them, "Grandpa John" Sterner. I'd heard that at age 94, John was among the most faithful, most staunch of the crew that gathers each Thursday at the Downtown Soup Kitchen to put together some 450 sandwiches, along with 60 gallons of fresh, homemade soups and several desserts. This happens daily, Monday through Friday at this Anchorage spot on the corner of Third Ave. and Cordova.

Vicki is the program and volunteer director at the Soup Kitchen, a position she's held for about 10 years. And that first time I visited there, we couldn't find John.

"Anybody seen John?" she yelled across the mammoth kitchen bustling with other volunteers. It looked like a beehive to me, maybe 20 volunteers buzzing around, each focused on a specific food preparation task.

It was easy to tell how much she cared about the Thursday volunteer crew, each volunteer, in fact. And since we couldn't find John, she launched into a description of her Tuesday crew of volunteer helpers.

"That's when my grandmas come," she said, smiling. "They rock! They are a kick in the pants. There's Grandma Ann. She's 84, I think. She can whip some of the young ones who come to help. I try to get some of these Thursday grandpas to come when that bunch of grandmas is here on Tuesdays."

Vicki is obviously having fun, orchestrating this scene swirling around us. But it is apparent she is concerned about John.

"He's always here," she repeats, looking around for him. She walks off to take a huge delivery of canned goods at the back door of the kitchen, taking along her cell phone to check on John.

Minutes later, Vicki bellows across the kitchen, "Hey, you guys! John just got out of the hospital! He had trouble with his medications. He said he's sorry he isn't here and asked if he could come back next Thursday," She laughs, amused and relieved.

I make a firm commitment with myself to come back in a week. I really want to meet this John.

Meanwhile I wander around, amazed by the hum of activity, the focus of so many people intent on making sure that the crowd of hungry clients, or "neighbors" as they are called, is well fed when they line up at noon. It's about 10:30 a.m., and the clock is ticking. The Thursday people are chopping and slicing fresh vegetables, spreading meat fillings on bread slices and wrapping sandwiches, stirring enormous vats of soup, cutting up desserts. I'm told that there may be 350 to 500 people that will be fed that day, the usual numbers.

I don't want to interrupt the rhythm and flow of the food production going on all around me, but I decide to visit with some of the many volunteers as unobtrusively as I can. I will hopefully find Grandpa John next week.

There's Ron Lango. He's 79 and on the sandwich-making detail. When I tell him what I'm doing, he decides to have a little too much fun with me.

"Why did you decide to volunteer here?" I ask him earnestly.

He pauses and looks up at me, peering over his glasses. "I got out of prison and had to do some community work," he replies.

I begin to write, then think twice. His eyes are twinkling. OK, watch out for this one, I tell myself.

He's been having this kind of fun for 11 years at the Kitchen, proudly wearing an apron engraved with the letters, CSM. "That's for Chief Sandwich Maker," he informs me. "I gave this apron to myself."

He tells me to go meet his wife, Nancy. She's off to one side, busy preparing big chunks of bread to go with the day's taco soup. When asked why she's volunteered here for the same 11 years as her husband, I'm relieved to get straight answers.

"There's a real spirit of fellowship, of serving in the true sense, here in the kitchen," she says. "I heard about this opportunity through my church, and helped out first in the shower room provided for the clients, then did office work. But I like the activity in the kitchen.

"We don't turn people in need of our food away, and it's good, fresh food. We're proud of what we serve." Then, she adds, "In a way, this is also for myself. If I didn't get out and do this, I might not see anybody."

Nancy and several others tell me I must go sample the day's soup. That didn't take too much pushing. I'd been smelling it ever since I got there.

Thursday's soup chef is Roger Morris. In his 70s, he's been stirring up his own special soup recipes at the Kitchen for nine years. He's standing at the stove beside three massive, 20-gallon pots, swirling a boat-paddle sized ladle in them, one pot at a time.

"I take whatever ingredients are donated earlier in the week, go on a website, and create recipes with those ingredients. I improvise. But you need to know – instead of measuring with teaspoons, I think in terms of full cups."

Asked what kinds of soups he's cooked up besides today's taco soup, he says, "I think my favorite is an apple soup – apples with chicken and rice. I like to make a fine stuffed cabbage soup, too."

He gives me a big spoonful of his taco soup. Yes, I could easily have devoured several full cups of that. It is delicious.

Standing at a table near Roger with some kind of big, metal chopping device is his wife, Karen, cutting potatoes into neat, square lumps.

"I'm older than dirt," she offers, laughing. "Really, I'm just 70." She says she decided to join Roger there when he began volunteering nine years ago.

"We call these people we serve our neighbors. I like to visit in the food line, to offer these neighbors a smile and my respect."

Karen wants me to know how much she thinks of the other volunteers and of volunteer director Vicki. "Vicki has a real calling for this," she tells me. "The volunteers and clients love her."

I tell her I can sense the caring in this place, and that I will be sure to be back next week, hoping to meet John.

I'm back, the following Thursday. There's John Sterner, and he is a wonder, a sandwich-making machine. I hesitate to interrupt his steady production efforts – he picks up a slice of bread, spreads the filling, puts on a top bread slice, stacks. His hands are flying. His body may be a bit stooped, but his spirit and will to serve certainly are not.

"The Lord tells us to be of service," he tells me quietly, by way of explaining why he's volunteered here for six years. "Sheer will power keeps me coming," he adds. "I'm 94, almost 95. I'll turn 95 on December 17. Yes, I feel my age. Every year, it gets a little harder. But I just tell myself I'm going to do this.

"I'm shooting for one hundred, I hope to keep serving until I'm one hundred. I'm feeling pretty good – not as good as when I was 20." He smiles.

"And on Tuesdays, I volunteer at the Rescue Mission.

"I lost my wife in 2001, in Michigan. Then I lived alone. My daughter kept after me to move here to Anchorage. Finally in December of '08, I moved here. It took some adjusting, especially to the dark that sets in now."

He stops for a moment, thinking about last Thursday when he was unable to come. "I had a reaction to my meds. Passed out. Got stuck in the hospital for two nights. I'd much rather be here."

I can tell he wants to get back to work. And then there's the trickster, Ron, that first volunteer I'd met a week ago who tried to fill me with misinformation. He's scooted over to interrupt my visit with John. 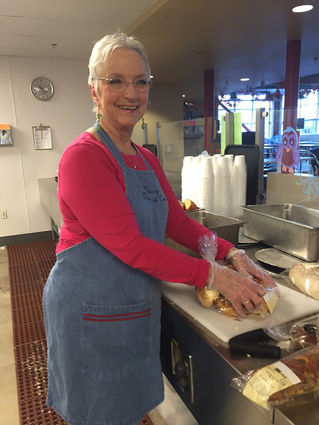 Nancy Lango, one of the Thursday crew of volunteers at the Soup Kitchen, is on the bread prep detail this day. "I fill in anywhere I'm needed," she says. "Cutting herbs or vegetables, organizing spices, chunking up bread. I'm glad to be a part of this."

"John used to be a sharp shooter, in the Olympics, even," Ron wants me to note. He's grinning widely, pleased with himself.

I leave the Downtown Soup Kitchen, knowing that some fine friendships have been formed here, that some fine deeds of service are being carried out, with kindness and good humor.

I won't forget John and his will to serve.

It serves over 400 cups of soup daily, prepares over 110,000 meals annually, and provides emergency clothing and showers. The majority of its funding comes from individual donations.

Its mission statement reads, "Demonstrating God's heart to our community."