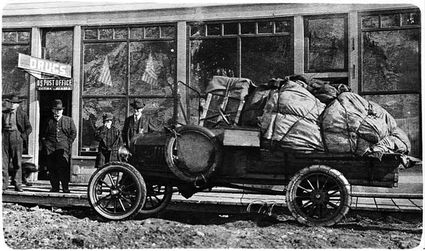 Robert Sheldon brought the first fleet of Ford Model-T automobiles to Alaska in 1913 to begin a transportation business that operated between Fairbanks and Valdez. The Model-T seen here pulling away from the Chitina post office in 1919 is loaded with 1,700 pounds of mail.

One of Alaska's early pioneers, who died 33 years ago this month at age 99, left his mark on early Alaska transportation. Robert E. "Bobby" Sheldon built the territory's first automobile, drove the first car down the Richardson and opened the first auto stage line.

Born in 1883 in Snohomish, Wash., Sheldon and his father arrived in Skagway along with thousands of others in search of golden riches.

The pair postponed their plans when they learned the Canadian government required each person traveling into Canada through White Pass to have supplies for one year. Sheldon's father died before they could reach their goal, leaving the lad to fend for himself.

The 14-year-old boy got a job selling newspapers. He sold the Seattle Post-Intelligencer, which cost only 2 to 5 cents per copy, for 25 cents because the smallest coin in Skagway at the time was a 25-cent piece. The young man made a tidy profit.

In his spare time, the natural mechanic read everything he could lay his hands on and quietly started taking correspondence courses. Sheldon eventually got work in the engine rooms of small steamers operating between Skagway, Dyea and Juneau.

After getting a job in Skagway, Sheldon – who'd never seen an automobile – built the first car in Alaska.

"All I knew about them was what I read in papers from the States," he later explained. "I was interested in mechanics, and being on the night shift at the Skagway powerhouse, I had considerable time to think it over."

He located four buggy wheels and built a frame over them. He then salvaged an old marine engine, put some gears on it and made a chain drive. The car could carry two passengers at the dizzying speed of 15 miles an hour.

Sheldon became manager of Fairbanks' Northern Commercial Power Plant in 1908 and continued his interest in automobiles. He read everything he could find on this new type of transportation. After studying several makes through magazines and stateside catalogs, he ordered a four-passenger Model-T Ford convertible touring car.

The Detroit price was $390. But by the time it traveled by rail to Seattle, by steamship to St. Michael and by riverboat up the Yukon, Tanana and Chena rivers to Fairbanks, it cost Sheldon $1,297.

He made that sum and more in two weeks after its arrival, however. He whizzed up and down dirt wagon roads with passengers giving him gold for the privilege of riding in his car.

In 1913, he became the first to drive a car down the Richardson trail from Fairbanks to Valdez, covering the 370 miles in 59 hours of actual driving time. He sold the Model-T for $1,300 and bought a bicycle. Sheldon then pedaled back to Fairbanks, becoming the first person to ride a bike from Valdez to the Interior city.

Sheldon then ordered more cars and organized Sheldon's Auto-Stage Line, which he operated with various partners until 1926. The company averaged three trips a month.

In winter, with Thompson Pass clogged with 50-foot snowdrifts, the stage line bypassed Valdez to connect with the Copper River and Northwestern Railway at Chitina. Isabelle Pass, impassable at times, often had to be portaged by horse and wagon.

In spite of all the difficulties, the 100 miles a day made by Sheldon's fleet proved impossible competition for other outfits. Many historic roadhouses went out of business, too, for they were spaced 20 miles apart – a day's trip for horse and wagon or dog sled. Those means of transportation had seen their day. The age of the automobile had arrived.

Sheldon never got rich from his pioneering transportation efforts. However, he felt rich in friends, memories and engineering achievements, and as he often said:

"Who wants to be the richest man in the cemetery?"