A success built on creativity and good food 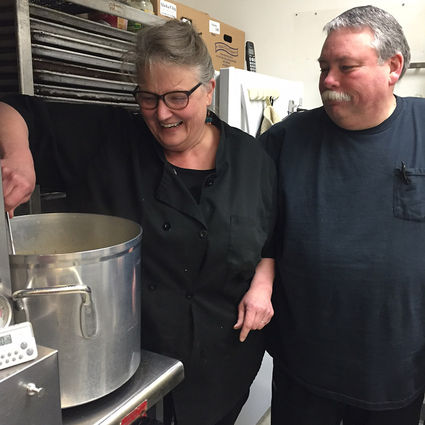 Janet Hickok and John Parker, husband-and-wife owners of the Doriola's restaurant in Anchorage, stir up the day's fresh soup.

"What do I like best about my job? That's easy. It's my customers! I love our customers."

It's an early Monday morning and Janet Hickok is multi-tasking. She has been an owner of Doriola's on Tudor Road in Anchorage since she drove north from Oregon back in 2005. She opened the small restaurant and customers have been like family.

"Here's the deal," she states firmly as she visits with me, plans the day's fresh soups, and handles the ordering of the week's food supplies with another visitor. "I have no children. I don't even have a dog, but I have our customers. They become like family. I know names, preferences. 'Here comes Mr. and Mrs. ice tea – or here comes Mr. cappuccino,' I've been known to tell myself as familiar customers come in. I get their drinks ready before they sit down."

Janet had long had a plan for her restaurant and never doubted that if she could launch it, she would make it a success. She is one energetic, determined woman. Growing up in Oregon, she originally plotted the venture with one or another of her sisters.

"I had eight siblings," she says. "We all had varied interests, talents. One sister was a writer, another an artist, one liked antiques, another crafts and quilting. Me, my interest was food, cooking.

"We thought we could find a little house in Oregon, serve snacks, desserts, salads, coffees. We'd have art in one room, maybe quilts in another, a room full of books, a room for antiques. That didn't happen, but I had a sister who'd moved to Anchorage and told me that if I'd move north, we'd open up a place. So I drove up and got here on May 19, 2005."

The plan was to find a location and open up in two months. "Ha," Janet sighs. "I admit we weren't business women, but the climate was not necessarily welcoming then for any woman trying to open up a business.

"We'd go to the banks, and again and again, they were reluctant to loan two women the money for a business. You know what finally worked? Three women from Alaska were willing to back two other women to get the restaurant open. We named three sandwiches after them. Those three sandwiches still have their names."

Doriola's opened at 510 Tudor Road for breakfasts and lunches in a small mall near a big Asian restaurant on Dec. 21, 2005.

"Location," Janet states. "We were told that would be another issue. We're not that visible. But people have found us, they've told others, and they keep coming back. It hasn't been an issue. We knew we'd do whatever it took to make it go."

Because of this faithful following, Janet reflects that she's had to do next-to-no advertising.

So what keeps people coming back? Janet feels Doriola's has found a niche.

"First, we're not just a chick place. We get a big lunch crowd, lots of seniors and lots professional people. They know they will be served efficiently but won't be rushed. And we're not a diner. We're not noisy. If customers like you, they bring in like-minded customers.

"We have two rooms that people can reserve for group meetings. There are multiple business groups reserving them, church clubs, book groups reserving them weekly, monthly. There's no charge, but we know the groups will order breakfast or lunch while here. It's a community need that we are meeting – filling a niche."

Janet had mentioned seniors. Their loyalty can reach true devotion.

"There are two senior women who come in every day – every single day – for lunch. If they can't come, they let us know, so we won't worry about them. We have three bridge groups of seniors that use one of our rooms. One group has been coming for 10 years, gathering on Mondays from 10 a.m. to 2 p.m. They are all wonderful people."

All of this overlooks one main reason for the Doriola's loyalty phenomenon – the food. Janet now owns the restaurant with her husband of three years, John Parker.

"We're both seniors ourselves and proud of it," Janet laughs. "Between us, we have 65 years as professional chefs."

The last thing Janet would want to have occurred over all those years of cooking is boredom.

"I have to be creative," she exclaims. She punctuates those words by pointing at the tabletop where we are sitting.

"Look here! Right here, I have two cookbooks. I'm looking up new soup recipes. The front of our menu changes every day. I come in and discuss with my husband what we will serve, then I go upstairs to our office and type up a new menu every day. I don't want to be bored." She means it.

"And the food must be flavorful, fresh, all made right here. We make our own spice blends, or own dressings, we even make our own brine for turkey. Of course, we are known for our homemade soups."

Her faithful foodies are well aware of Doriola's good food. Still, I'm surprised when I ask her what is most important about Doriola's to her.

"Cleanliness!" she declares without hesitation. "Yes, the food tastes very good and I'm always experimenting with new recipes, but the restaurant must, above all else, be clean."

Janet is not a hidden chef, working away from her customers. Along with her staff, she greets the customers, serves them, cleans tables. 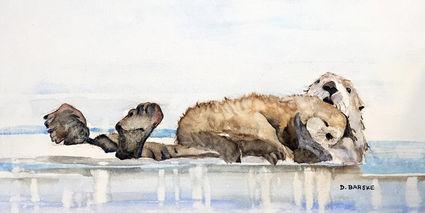 January's guest artist at Doriola's will be Senior Voice feature writer Dianne Barske. The show will have an opening on Friday, Jan. 8, from 5 to 7 p.m., and will run through Jan. 29. A percentage of sales will go to AK Child & Family. It is an agency meeting the needs of Alaska's children for over 125 years. Dianne works in acrylics and conte crayon on canvas, such as "Safe and Sound," above. She has also written and illustrated several children's books.

But one more thing is all around me, and visibly demonstrates her creative spirit: the walls of Doriola's are covered with art – on this day, Janet's art. She works in encaustics, hot and cold wax. Vibrant colors fill the wall space. When does she find time to create all this? The restaurant is closed on weekends, and Janet uses that time to do her own art.

She is a professional artist as well as a professional chef. She will be part of a show coming up the week of January 25 at the Hotel Captain Cook - abstract works inspired by aerial views of Alaska's coastlines - and she will have a solo show in July at Stephan Fine Arts Gallery in Anchorage.

Typical of her vision of Doriola's as a space to be shared, Janet also invites other artists to show their work there. Usually the shows run for a month.

"I'm not in the gallery business, but art shows well here," she states simply. When Janet's show comes down, a new artist will be showing there as the New Year begins, during the month of January.

Doriola's is open for breakfast and lunch, Monday through Friday, 6 a.m. to 3 p.m., 510 West Tudor Road. The daily menu can be viewed on the restaurant website, doriolas.com, along with the many rave reviews.