Europe is right next door 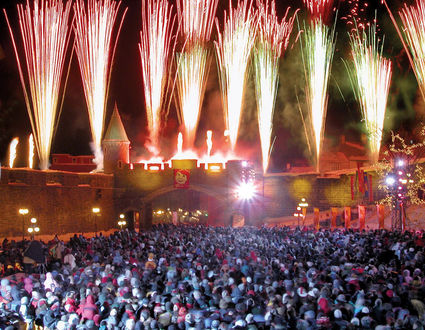 When I was about 10 years old, my dad took my sister and me on a camping trip up the New England coast from Massachusetts to Quebec. It was memorable to me for what we ate all along the way: Chef Boyardee ravioli and corn on the cob. I cannot look at a can of Chef Boyardee to this day.

However, the memory of the crepe breakfast on the wide stone plaza across the street from the Hotel Frontenac delights me still.

"Quebec City, So Europe. So close" is the apropos motto of this city with Old World charm in eastern Canada. It has so much to offer.

A history that shaped North America

Prepare yourself with a great read on Canadian history by Francis Parkman Jr., 1823-1893, a Bostonian who wrote about Canada's early development as a nation like he's writing a gossip column - historical figures are brought to life warts and all in Frances Parkman Jr.'s "Vol. 1: France and England in North America and Vol. 2: Count Frontenac and New France."

French Canadians expanded the frontier with its "voyaguers," or travelers, indentured servants who journeyed by canoe trading in furs and the "corps de bois," or literally "runner of the woods," who traded with the First Peoples for furs.

In 1759, the British invasion force led by General James Wolfe defeated French troops under Marquis de Montcalm on the Plains of Abraham in Quebec City, which surrendered, basically making the French in Canada second-class citizens.

The Plains of Abraham, where cannons and muskets once roared is now the city's main park were people peacefully picnic in the summer and ski in the winter.

Old Quebec City is a UNESCO world heritage treasure with unique walks - one similar to the Great Wall in China, but far shorter. For more than 2.8 miles, stroll along the fortified stone walls. Quebec is the only city on the continent, north of Mexico, to have them.

The Dufferin Terrace atop Cape Diamond overlooks the mighty St. Lawrence River and can be a brisk walk in the winter with ice traveling down river. Quartier Petit Champlain is a great shopping destination with boutiques, art galleries and restaurants on cobblestone streets.

And please, do not be an ugly American and squeal when you buy something by saying "It's so cheap!" Canadians are very sensitive "aboot" their currency rates and tend to view Americans like carpetbaggers. We always just tilt our heads sideways and said "It's $14.99."

Alaskans will be familiar with the bilingual products if they shop over the border in Canada.

What to see and do

Village Vacances Valcartier, oddly touted as the "largest winter playground in America," is 20 miles north of Quebec and offers more than 35 snow slides, skating paths, snow rafting, a children's playground, and a snow and fondue packages, and is a great destination for a family vacation.

Musée national des beaux-arts du Québec holds a collection of Québec art and is just a short walk for the Chateau Frontenac. 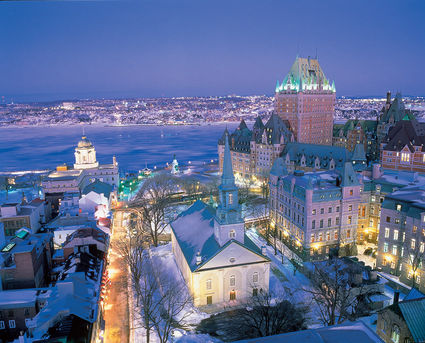 Chateau Frontenac, opened in 1893, dominates the view of Old Quebec at night in winter.

The Sainte-Anne-de-Beaupré Shrine has been a "place of miracles" for the past 350 years, attracting one million visitors annually. As with many cathedrals in Europe, it is a neo-Roman style basilica and has a golden statue of Saint Anne, who was Jesus' grandmother, hundreds of stained glass windows, the cavernous nave, and works of art. It is 21 miles from the city and reachable by train or bus.

Although there are many hotels and B&Bs, the Château Frontenac is the one. Opened in 1893, four years before the Klondike Gold Rush, it was the first of a series of "château" style hotels built for the Canadian Pacific Railway Co.

Also at that bargain rate is the Hotel de Glace, the ice hotel open from Jan. 4 to March 28, with 44 rooms available. Be warned you have to wear thermal underwear to bed. But you do that already, right?