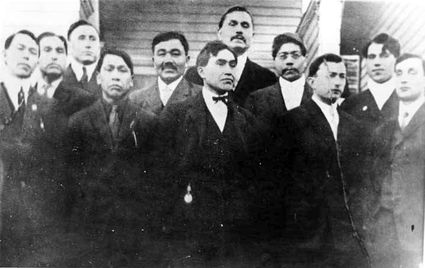 After decades of oppression by Russian fur traders, and then American interests, the Natives of Southeast Alaska decided it was time to organize into a united voice to change the way people perceived them and to better their circumstances in a land that their ancestors had inhabited for thousands of years. A dozen men and one woman from Sheldon Jackson Training School (later known as Sheldon Jackson College) met in 1912 and wrote a charter for what became known as the Alaska Native Brotherhood.

For generations white people had deemed these young people and their forefathers as savages. They were not citizens of Alaska, could not vote on issues that affected them, could not own land and had no civil rights. Most Americans viewed Alaska's Natives at the bottom of the ladder of civilization.

When the gold rushes of the late 1800s began, Alaska's first people were not allowed to stake mining claims, either, because the Mining Act of 1874 stated that only two groups of people could do so: American citizens or immigrants in good standing – which usually meant white immigrants.

Also, more often than not, white hire preferences were in place for jobs in businesses, government and communities. And if a Native did land a job, he received a lower wage than a white man doing the same job.

Other inequities existed, too. Natives could not testify against a white person in civil courts, Native children could not attend white schools, and much of Alaska's society was segregated with "whites only" signs. Sometimes entire communities were off limits to Alaska's Native people.

After the United States "purchased" Alaska from Russia in 1867, some officials wanted to move the Natives out of this lower status. To that end, the Commissioner of Education banned Native languages in schools and declared an English only policy in 1884 – which is perhaps why the founding fathers of the ANB specified that its membership must speak English.

The original charter for membership into the Alaska Native Brotherhood also featured other stipulations to promote white American culture among the Natives, including that its members be Christian, take a sobriety oath, not participate in potlatches and dedicate their lives to service.

These forward-thinkers of the ANB knew that the only way to better the Natives' situation in their own land was to get an education and play the game of the white man. They learned to organize and soon pursued the right to become citizens of the United States, pushed the issue of Native land claims and promoted the social, civic and educational well being of Alaska Natives.

After only three years, the Alaska Native Brotherhood achieved passage of the Native Citizen Act. It was limited, however, as a Native could only become a U.S. citizen after he passed a literacy test, pledged to move from his ancestor's ways to Western ways and had the written endorsement of five white men. It wasn't until the 1940s that Native citizenship, without restrictions, was assured.

The land claims issue would take many more years, but finally was settled with the passage of the 1971 Alaska Native Claims Settlement Act.

Although the ANB has been largely a Southeast Alaska organization, many other groups were formed because of it that have been instrumental in moving Alaska's Native people from second-class citizens to leaders who are helping to shape the future of the 49th state.