Who produces your food? 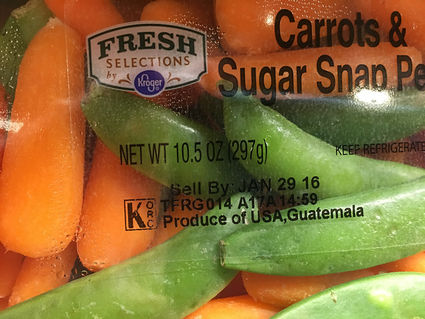 Many shoppers don't realize from how far and wide their food comes. And despite labeling, it can be difficult to accurately determine the country of origin.

You've heard of omnivores, vegetarians and vegans and you probably have an idea of what these terms mean. But, a newer term "locavore" may be unfamiliar. Actually, the word locavore has been around for 10 years and current momentum promoting sustainable communities by "eating local" has pushed the locavore movement. The locavore chooses to eat only locally grown and produced food or as much locally produced food as possible.

"Local' is often defined as grown or produced within a 50 mile radius of where you live, although others are a bit more liberal, expanding that definition to within 250 miles. Even with a 250-mile limit, Alaskan locavores might struggle to put together a satisfying diet.

I immediately think, "what would I do without my morning tea or coffee?" And this is just the beginning of food I might miss. After a quick inventory I realize that in a single breakfast, I might eat food from Alaska, Washington, California, Canada, Africa, Costa Rica, Sri Lanka and Greece, and I really enjoy these foods. So, in Alaska, with 95 percent of our food coming from Lower 48 growers, producers or distributers, one has to ask why would anyone try the locavore eating style? Does the answer to the question of where your food comes from really matter?

Where does your food come from?

It is currently estimated that 17 percent of the total U.S. food supply is imported from other countries, including 34 percent of the fresh fruit, 34 percent fresh vegetables and 80 percent of the seafood (around 358 pounds per person). This means that your strawberries and oranges may be from Egypt, peppers may be from Ecuador, avocados from Mexico, tomatoes from Canada, grapes from Chile, asparagus from Peru, bananas from the Philippines, pineapple from Costa Rica and tilapia from China. The United States is also one of the biggest importers of spices, importing more than 80 percent of our supply.

Many U.S. companies import ingredients or raw products from abroad for foods prepared or packaged in the U.S. The labels don't have to disclose most of these. A 2012 issue of Food Safety News gave an example of the origin of ingredients for a NutriGrain bar: U.S., China, Philippines, India, Europe, Denmark, Italy and Scotland. Apple juice concentrate used in many fruit juices and juice drinks often comes from China, but you won't see this on the label.

This week in local grocery stores, you can find apples, pears, oranges, grapefruit, kiwi, cilantro, kale, cabbage, swiss chard, potatoes, sweet potatoes, onions, rutabaga, carrots, mushrooms, and lettuce all grown in the U.S. Mexico, South and Central America are providing blueberries, celery, bananas, peppers, tomatoes, grapes, green beans, zucchini and eggplant. If you want to get really local, the Center Market has Alaska barley products, carrots, potatoes, beets, fermented vegetables, dried mushrooms, meats, eggs, fish, scallops and honey. I don't think that I can commit to "locavore" eating quite yet; but, I certainly can buy closer to home than Ecuador and feel like I am making a responsible and delicious choice.

Even if your concern was just for the environmental cost of shipping foods from abroad, this level of imports would make you stop and think. And, the carbon footprint is just one of many concerns.

Despite stronger regulation efforts of the USDA, FDA and CDC, inspection and control of imported foods remains a challenge. Safe foods, environmentally safe production methods and fair treatment of workers are expected of countries importing to the United States but our ability to control these things are limited. Only 90 of our 300 import locations have full-time inspectors.

The FDA, which has the responsibility to inspect foods other than meats, fish and dairy, has the capacity to inspect only about 2 percent of the imported food under its jurisdiction. Of the beef, pork and chicken imported, only 8 percent is inspected. Seafood is particularly concerning with only a fraction inspected and nearly one half rejected due to contamination with cancer causing chemicals or antibiotic residue.

Food safety is one of the biggest concerns of globalization. Seafood may be a source of contamination but it has not been linked to as many cases of food poisoning as spices or produce. A 2013 report stated that as many as 1,700 people have been sickened in the U.S. from imported spices and that 15 percent of imported coriander and 12 percent of oregano and basil shipments were contaminated with salmonella. Mexico, India and Turkey have been cited for salmonella in spices. Spices as well as produce from Mexico, our biggest trade partner, have been the source of many food poisoning outbreaks – salmonella from papayas, cilantro, cucumbers and fresh and frozen strawberries; hepatitis A from green onions, shigella from parsley; cyclosporiasis from raspberries and cilantro.

Headlines recently drew attention to Thailand's slave labor force that harvests the largest percentage of shrimp imported into the U.S. Our import laws allow companies to ignore fair labor practices if what they are producing is considered in short supply domestically. Not only are these farms using slaves to produce our pre-peeled shrimp, the shrimp and fish farms of Thailand, Vietnam, China and Ecuador pollute surrounding waters with bacteria and waste, degrading the local environment and damaging habitat for other important species.

Does it matter where your food comes from?

It is important to know where your food comes from and how it is produced. Buying as local as possible improves local economies, access to food and food security. It can also reduce your dependence on potentially unsafe food and reduces support for environmentally destructive production methods. It can help to reduce your "carbon foot print" 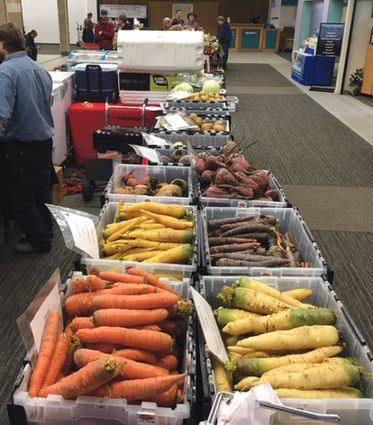 How to limit your imported food and increase your safety

• Buy produce only when it is in season – imports to the U.S. are mostly in the winter, when we can't grow our own.

• Join a CSA; this may not be truly local but it will be closer.

• In Anchorage, shop at the indoor Center Market on Wednesday and Saturday.

• Ask and check food labels for country of origin.