Alaskans live through 'hell on earth' 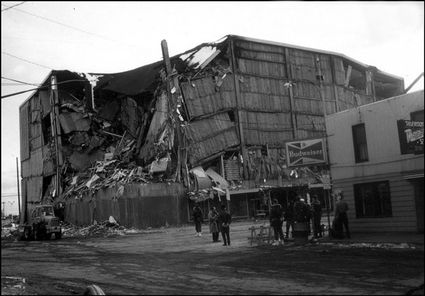 The second-largest earthquake in recorded history struck at 5:36 p.m. Anchorage time. Measuring 8.4 on the Richter scale, experts later upgraded it to 9.2 on the Mw (moment magnitude) scale as the Richter scale was determined to be inaccurate at measuring earthquakes above 8.0. Many Alaskans later said they lived through hell on earth during those 4 minutes and 38 seconds of violent shaking and the tsunamis that followed.

The temblor's epicenter was located about 75 miles southeast of Anchorage, 54 miles west of Valdez and 15 miles beneath the tranquil waters of Prince William Sound. Centuries of pressure and strain finally broke loose when the crust of the Pacific Plate moved an estimated 25 to 30 feet northward, driving beneath the North American Plate with such force it released 200,000 megatons of energy in an instant – more energy than 10 million Hiroshima-vintage atomic bombs, according to experts.

The effects were felt around the world – even in Chile, where the largest quake ever recorded at 9.5 hit on May 22, 1960. While 114 people died in Alaska, another 12 were killed in Crescent City, California, and four children camping on Beverly Beach State Park in Oregon lost their lives when tsunamis hit the Pacific Coast. Tsunami, an adapted Japanese word meaning "port wave," refers to the fact that the wave's danger and destructive power only becomes evident as it approaches the shore.

Entire towns across Southcentral Alaska crumbled, streets buckled and cars, stores and homes dropped into wide crevices that split across the ground. This earthquake altered more of the Earth's crust than any other earthquake on record, according to U.S. Geological Survey reports.

Uninhabited Montague Island, near the quake's epicenter, raised the land as much as 33 feet. It lowered the ocean floor up to 150 feet under the devastated harbors of Seward and Valdez. The shoreline in parts of the Kenai Peninsula lifted 8 feet. Kodiak Island dropped 5.5 feet. And Anchorage shifted laterally 6 feet.

The Good Friday earthquake, which disrupted 185,000 square miles – larger than California – was the first "properly interpreted" megathrust quake, according to the U.S. Geological Survey. Megathrust quakes occur in subduction zones where tectonic plates converge. When forces build up and those plates slip, the results can be catastrophic, as in Alaska.

The military and Alaska Communication System labored all night to restore phone lines to the Lower 48, and local radio stations moved swiftly to get back on the air so people with transistor radios could keep abreast of vital news. The American Red Cross and The Salvation Army jumped into high gear, as well.

The grim news reached the LBJ Ranch in Texas, where President Lyndon B. Johnson was spending the Easter weekend. Advisors woke the president twice during the night to give him updates on the devastation, according to newspaper articles. In the morning, Johnson officially declared the 49th state a disaster area.

One Anchorage policeman said it was worse than a disaster. After assisting with emergency services for 24 hours, he told a Newsweek reporter "it was hell."