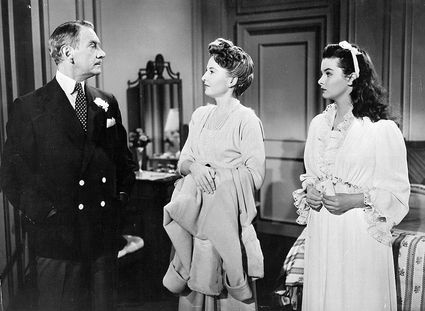 A publicity still from the 1953 film "Titanic," with Clifton Webb, Barbara Stanwyck and Audrey Dalton. "The special effects were pretty good for 60 years ago," says Dalton.

Four decades before James Cameron's 1997 blockbuster "Titanic" made waves at the Academy Awards with 11 wins, Audrey Dalton signed on for Hollywood's 1953 recreation of the famous 1912 maritime disaster.

"Our version only received one Oscar for writing," said Ms. Dalton, who turned 82 in January, from her home in Saddleback Valley, Calif. "But the special effects were pretty good for 60 years ago."

"He was a little bit like that and mostly kept to himself," recalled Dalton. "But he was very funny with a sharp wit. Barbara Stanwyck was a dream – the ultimate pro, always prepared and ready to help."

Dalton recalls the cast welcoming some special guests during shooting.

"A man and a woman who were Titanic survivors visited the set," said Dalton, whose film character also escapes on a lifeboat. "They were children when the ship sank, but had memories of the event. I don't recall hearing them tell us any specific stories of the sinking other than the general horror of it."

Irish born Dalton was 17 when her family moved to London where she studied at the Royal Academy of Dramatic Art and was soon noticed by a film executive.

"Paramount brought me over to the U.S. on a 7-year contract beginning with 'The Girls of Pleasure Island,'" she explained. Set on a South Pacific Island toward the end of World War II, the 1953 comedy was actually released while the Korean War was still in progress.

"To promote the film, we were sent to Seoul where it premiered for the troops," said Dalton. "It's dated now, but the men enjoyed it. We were driven around in army trucks and dressed up in beautiful Edith Head gowns doing skits for the troops."

"We rehearsed for three weeks and shot it in sequence, which was very unusual," she said. "Niven was a wonderful, funny man, a great raconteur. It was great to just sit quietly in a chair and listen to his wicked sense of humor."

Since retiring from acting, Dalton has been a popular guest at film festivals and is scheduled to appear at this year's Williamsburg Film Festival, Va., held March 9-12.

"The sci-fi fans always ask about 'The Monster that Challenged the World,'" laughed Dalton, about the 1957 B-monster movie classic.

"That monster was enormous!" she added, referring to the 12-ft pneumatically controlled creature she eluded, which was curiously called a reptile in the original trailer, but was actually a giant mollusk in the film. 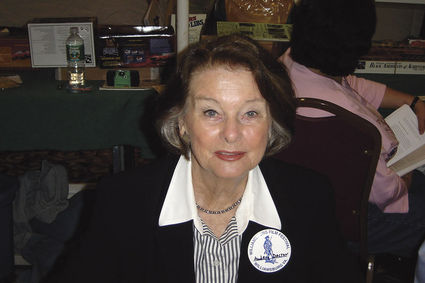 Audrey Dalton at Dalton in 2007 at the Williamsburg Festival.

Dalton's movie career lasted until 1965, during which time she also raised a family.

"I had four children in six years between 1953 and 1959. What's interesting is that many websites today have given me a fifth child," she chuckled. "He even has a birth date and a name – Adrian. Needless to say my children have made great fun of it and ask why I never told them about their lost brother."

As for her actual children, none were drawn to acting.

"Just as well," she said, "it can be a difficult business. I did a few very good films and some mediocre ones. I enjoyed every day on the set."