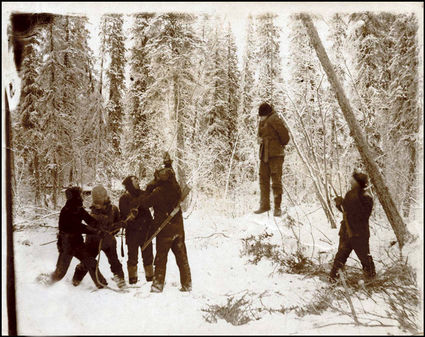 As the Territory of Alaska grew up, the people in the Great Land distanced themselves from frontier justice – as in the photo here taken in the Koyukuk region – and turned to sending criminals back to the Lower 48 with one-way tickets south.

An abundance of gamblers, con men and thieves made their way north following the discovery of gold in the Klondike in the late 1890s. And with no official lawmen to take care of evildoers, miners took the law into their own hands and dispensed frontier justice. Murder was punished by hanging; stealing meant a sound whipping or banishment.

After Alaska became a territory in 1912, Alaskans turned away from hanging and whipping offenders but kept their tradition of banishment to deal with "undesirables." When rascals could not, or would not, find legal employment and instead led lives that included drinking alcohol to excess and crime, they were given one-way tickets back to the "Lower 48."

Referred to as "blue ticketing," this method of removing ne'er-do-wells from Alaska society often was used by police officers. The miscreants were given a choice of a trip to jail or one-way tickets south. The accused usually chose the ticket and then was escorted via train to Seward to catch a steamship bound for Seattle.

The term "blue ticket" stemmed from the color of steamship passes at the time. Sometimes concerned citizens pooled their resources to purchase a ticket for a scallywag, other times businessmen donated funds. Once a person was issued a blue ticket, his or her name was put on a special list that prohibited a return to the territory by boat.

This system worked pretty well, according to sources that lived in Alaska at the time. Once in a while a blue-ticket passenger would sell the ticket in Seward. Then he'd use the money to buy alcohol and resume the conduct that got him the ticket in the first place. But overall, it proved an effective way to rid the territory of troublemakers.

The practice of blue ticketing eventually died out. And good riddance, some attorneys today would say, as the procedure did not offer the offenders due process and probably was unconstitutional.

However, a form of blue ticketing continues to live on in several Alaska villages. Although rare, village councils have been known to banish persons whom they believe are dangerous to their communities.

One of the most recent instances involved the village of Tanana. The Tanana Village Council, the Athabascan Indian tribal authority in the northern village of 250, took steps to expel two men who contributed to the homicides of two Alaska State Troopers in 2014.

And when a man suspected of drug dealing stepped off a plane in Sand Point in 2013, residents of the community surrounded him and told him he was not welcome in their village. They handed him a return ticket to Anchorage and made sure he got back on the airplane.

Those living in the Yup'ik Eskimo village of Akiak in southwest Alaska also voted in April 2013 to banish a man for bootlegging and drug dealing.

Village councils rely on the state to enforce the banishments when they are handed down, and the Alaska Department of Law appears to unofficially support the practice.