Still living their dream in Fairbanks 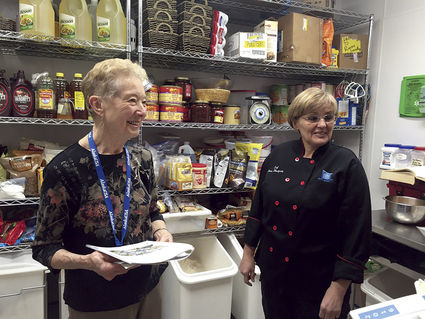 "I didn't want to leave Fairbanks. I love my town." – Karen

"I came back to Fairbanks after moving to Oregon. I came back to live here, at Raven Landing. It was like coming home. I had never really wanted to leave." – Patti

"This community, this place, this is my family." – Patricia

This was one happy, congenial group, residents of Raven Landing, gathered for dinner one mid-March evening in the community's large, light-filled dining room. (There was much laughter when one woman at the table confessed she had moved to Fairbanks from Toad Suck, Arkansas.)

My husband and I had been invited to dinner during our visit to Fairbanks, and what a fine, delicious dinner it was. After delving into an abundant salad bar full of fresh veggies, we were served ahi tuna, blackened with a soy mustard sauce, beurre blanc, atop soba noodles. There was a basket of fresh baked bread and a yummy fruit and pastry dessert. Gourmet dining at its finest.

Earlier in the day, we had toured the Raven Landing Senior Community. We had discovered that there is a great deal that is special about Raven Landing. It's not just the wonderful food prepared by chef Slava Martinets, whom we'd had a chance to meet. It is truly a home, a community for Fairbanks seniors, age 55 and up.

Our guide was Karen Parr, now board chair of the Retirement Community of Fairbanks, a non-profit organization that owns and operates Raven Landing. She is also the instigator for the entire project, a woman with a dream of staying in Fairbanks when she retired, following the death of her husband. Over 10 years ago, she and a small group of friends began and now the dream and her mission are now very real. Four buildings have risen, with the first opening in 2010, for a total of 95 apartment units today. Just days before our visit, the fourth building had opened, so the place was buzzing, welcoming about 45 new residents.

Karen sat us down in the Community Center library to explain how this all had come to be.

"By 2003, a friend and I had lost our husbands. We'd been living in remote areas of Fairbanks. My husband Charlie and I had our dream home in the woods for 40 years. It was not so much fun living in that big house in the hills without him. I realized I was using only two rooms.

"So my friend and I began looking around. I couldn't get into the Pioneer Home, it was full with a long waiting list. I didn't qualify for senior housing around town, because as a retired teacher, I had too much income. There was nothing in the middle, no options for people with a middle income, a place that would allow me to give up my home and still live comfortably and independently in the community I love.

"We began a 10-year process of brainstorming, fundraising, searching for land. We eventually had to demolish the old, big grey Fairview Manor that was falling apart on this site. It looked like a Gulag. I spoke at meeting after meeting all over town, and am sure I was often seen as 'that stupid retired teacher coming to talk again with her pictures, her drawings.' I admit it was a huge vision. A lot of people thought we were nuts.

"We even looked at senior housing chains Outside. But we'd been told that would never work in Alaska. The costs of food, utilities, labor and construction would be too high. Plus I wanted a place with a real Alaskan feeling."

She paused, reflecting on this, and began to laugh. "It needed to be a place where the eccentricities of a true middle-class Alaskan society would be accepted."

After the first apartment building opened in 2010, there was something real to show, something the groups Karen was addressing could see.

"I understand that at first I was selling something they couldn't see. That's a hard sell. I suppose I could often get cranky. But with that first building up – and it filled in a hurry ­­– each succeeding building filled up faster than the one before it. Building 2 opened in the spring of 2012, building 3 in January of 2013, and building 4, just now. There was a wait list of 160 for this new building a year before it opened."

Looking around at the spacious common living room in which we are sitting, Karen added, "This beautiful community center with its meeting rooms, dining room, library, performance stage, exercise area – even a beauty and barber salon – opened in 2015."

Why this demand? What are people finding at Raven Landing?

"There was nothing else like it in Alaska," Karen said, adding that there still really isn't. She wanted people to live as independently as possible, with privacy when wanted, but with a genuine sense of community, where people look out for each other.

"We are much more a village than an old folks home."

During our tour, my husband and I had met Chelsea Walker. She and her husband Gary had been two of Raven Landing's first residents. She scooted up in her wheelchair to ask Raven Landing's general manager, Susan Motter, what tasks needed to be done that day, what volunteer chores they might do.

"Chelsea and Gary check on everyone," Karen said. "I call Chelsea our dorm mother, or both of them our concierges. They demonstrate so well our commitment to mutual caring."

Chelsea just laughed. "Coming here was the best decision we ever made. We can be as quiet or involved as we want – with the library, the meals, movies, lectures, exercise activities. We had two small dogs, and we wanted them with us, and here they are."

Chelsea continued, "I think we have it all. There are beautiful one- or two-bedroom apartments – all with complete kitchens, all with balconies, all connected directly to this community center. That creates a feeling of a lively neighborhood, protected from the weather. We pay a service fee which results in freedom from home maintenance, and that means more time for all these activities, volunteering or traveling." 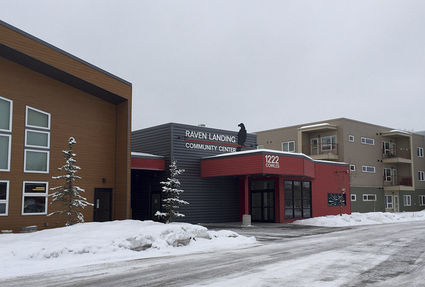 Since opening in 2010, Raven Landing has provided seniors a home and community in Fairbanks. The concept, initially a hard sell, has proved so popular three additional buildings have been added, each filling up more quickly than the last.

Karen added, "We wanted a town location, so that we could be a community, but also so that the community could come to us."

I asked Karen if she is proud of what she sees around her, what has been accomplished.

"I'm more grateful than proud. I feel I'm a very lucky woman. Fairbanks rallied to help us accomplish this, so seniors could stay."

Raven Landing's apartments, all ADA compliant, are home for over 100 Fairbanks seniors.

"This whole state – Alaska – used to be a frontier community," Karen said. "Now people are staying longer, living longer. This place, Raven Landing, is now a real community for seniors. The whole point has been to make this place home, really home."

For more information on Raven Landing, you can visit the website, http://www.ravenlanding.org, call 907-328-5454, or email retirement@ravenlanding.org.