Baseball played in the arctic in 1894 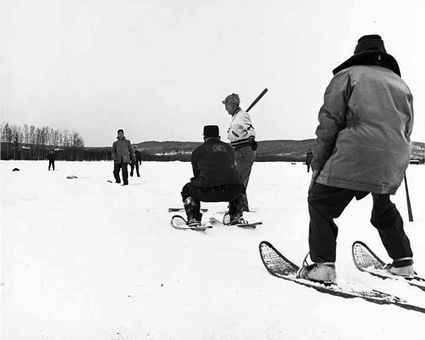 Alaskans play baseball in all seasons, as seen by this photograph taken in the 1950s during winter. Snowshoes do pose an extra challenge.

As the days get longer and winter begins to wane, it's safe to assume that the boys of summer are preparing for another awesome season of baseball – a mainstay in Alaska for generations. Before Anchorage had plotted out its main street on Fourth Avenue in 1915, baseball teams faced off near the mud flats to put bats to balls that Fourth of July.

Following statehood in 1959, Alaska attracted a multitude of collegiate players who played for teams like the Anchorage Bucs, Alaska Glacier Pilots, Peninsula Oilers and the Mat-Su Miners. Many went on to play for the majors, including homerun king Mark McGwire, fantastic pitcher Randy Johnson and Hall of Famer Tom Seaver.

But the earliest reference to a baseball game in the north comes from the arctic region in 1894, according to research of Alaska historian Stephen Haycox. Haycox reports that Gen. Frederick Funston, a Spanish-American War hero, came upon a game being played by stranded whalers that March.

Funston first came into Alaska via the Chilkoot Pass, later made famous by the Klondikers, in April 1893. He then wind-sailed across the upper Yukon lakes of Lindeman, Bennett, Marsh and LeBarge and then shot Miles Canyon and Whitehorse Rapids, according to Haycox.

He spent the summer of 1893 working for the Department of Agriculture, collecting botanical specimens in the Canadian Yukon and near Fort Yukon in Alaska.

Funston did not want to hang around the trading post when winter set in, so he joined some Canadian Indians and traveled up the Porcupine River to Rampart House and then over the Canadian divide to Fort McPherson, a Hudson's Bay Company post on the Peel River.

"Although the trip over the Chilkoot Pass had been strenuous, Funston's trek over the Richardson Mountains to the Peel River was a veritable arctic survival test," Haycox wrote in an article titled, "Baseball on arctic ice," which appeared in The Anchorage Times on July 29, 1984.

When Funston learned that ice floes had crushed seven ships of the Pacific Steam Whaling Company's arctic fleet, he set out on another trek 175 miles north from Rampart House to see if he could help. He found the reports exaggerated, however, as he found the ships were frozen in but had not been destroyed. What Funston did find on that chilly March day in 1894, though, were two teams from the stranded ships playing a heated game of baseball.

Finding that his services were not needed, Funston returned to Fort Yukon. He then traveled on to St. Michael, where he hopped on a steamer bound for San Francisco to report to his superiors.

They were pleased with his report about resources in Alaska, and stunned at the extent of his travels in the arctic. But they had one criticism of his northern adventure.

He had forgotten to record the score of the baseball game!