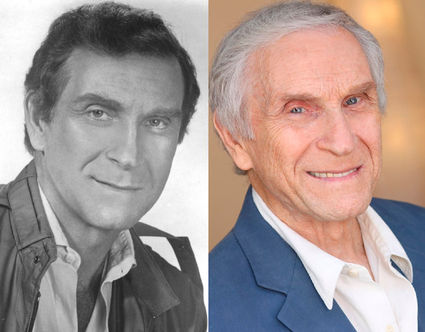 Recognized for hundreds of television roles dating back to the 1950s, Peter Mark Richman broke into film alongside Gary Cooper in the 1956 civil war western, "Friendly Persuasion."

"But I'm not only an actor, I'm also a playwright," noted Richman, who turned 89 in April, from his home in Los Angeles. "'A Medal for Murray' just finished a two year run in Israel and it toured Tel Aviv, Jerusalem and Haifa."

Richman was doing a scene from his play in Los Angeles several years ago with Sean Penn's mother, Eileen Ryan. Afterwards, he was approached by noted Israeli actress Efrat Lavie during her visit to the U.S.

"She loved the play but was heading back to Israel and wanted to take a copy of the script back home with her," said Richman. "The next thing I knew, it was translated into Hebrew and became a smash hit over there."

But years before he entered the world of arts and entertainment, a family member almost pressed young Mark down a different career path.

"My father died when I was 16 and my brother was kind of a surrogate father," recalled Richman. "He was a pharmacist and I worked in his store as a teenager. He thought I should get a real education so I ended up reluctantly going to pharmacy school. I expected to flunk out after six weeks but stuck it out, graduated, and became a licensed pharmacist in two states."

However, the attraction of the stage proved more enticing than dispensing penicillin.

"I managed a drugstore for a year, but always wanted to act," said Richman, who studied at New York's Actors Studio before finding his way onto the East Coast stages in the early 1950s.

"I was touring in a play called 'The Rainmaker' with Eva Marie Saint in New England when my agent called to say producer/director William Wyler wanted me to do a screen test for 'Friendly Persuasion.' I caught a private plane out west and got the role."

Richman says working with Cooper, a living legend in 1956, was a joy.

"He was just terrific, a hell of a guy, and very learned – far from the 'yup' character he is often depicted as in some films. When exchanging dialogue, he really digested what you said before replying – there was a thinking process going on rather than just reciting lines." 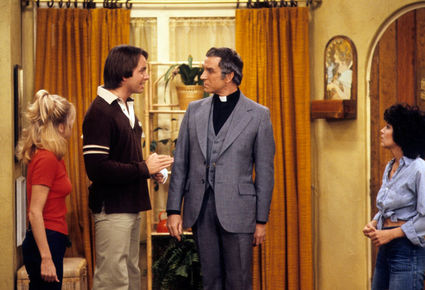 Peter Mark Richman with the cast in "Three's Company," one of his many TV roles.

"I'm a real painter, not a celebrity artist," he stresses. "I began painting in oils when I was 12 and have a good background in the mechanics of faces and figures."

Richman has a major writing project in the works, too.

"I also finished my autobiography and have high hopes for its publication – it's called 'I Saw a Molten White Light.'"

But he continues to be visible as a frequent character on cable TV through reruns of dozens of classic TV shows such as "Matlock," "Murder She Wrote," and "Three's Company."

"I appeared in over 500 TV episodes," he said, "I played a lot of doctors, but never did play a pharmacist!"