Love for animals extends from home to community 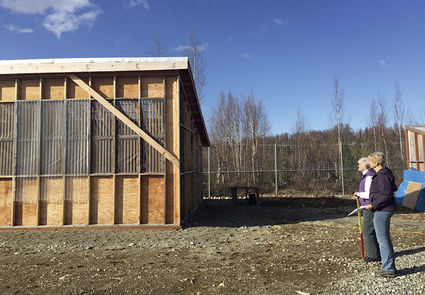 Joanna "Jo" Walch shows author Dianne Barske a large mew, or bird enclosure, built by Jo's husband, Ken, and a crew of volunteers, at the WildBird Rehabilitation Center in Houston.

My husband, Elliott, and I were on an excursion. On a sunny, warm afternoon in early April, we were bumping along a curvy, gravel road, up and down hills, heading to the home of Joanna and Ken Walch in Big Lake. Joanna – Jo – calls it "our little paradise." Their home is perched on a hill, overlooking Mud Lake, covered with thinning grey-blue ice in our unusually warm spring.

We were about to meet a cast of characters. In the yard, greeting our approach with a few curious howls, was Jo's sled dog team, four Siberian Huskies. An exuberant dog Jo and Ken are caretaking for a neighbor, bounded into our car as soon as we opened the door to get out. There was much tail wagging as he made a quick friendship with our dog, CB, along for the ride.

Once in the door, Jo began introducing us to more of her brood. In a room off to one side of the home's entrance were two ample bird enclosures, called mews, where we spotted five birds in Jo's care – Christopher Robin and KC, both robins; Gypsy and Ranger, both Bohemian Waxwings; and hanging upside down was Lulu, a White-winged Crossbill. ("She's such a quirky character," Jo commented.)

In a separate mew were two doves, Dudley Dove and Skipper.

Somewhere in the house, hiding out because of the hubbub of our arrival, were the Walch cats.

Jo had made the distinction between pet doves and birds-in-care since she is trained as a presenter and educator for the five birds, all Education birds. She volunteers for the Alaska WildBird Rehabilitation Center (AWBRC), located in Big Lake.

"The center was started here15 years ago," Jo explains, "when the Bird Treatment and Learning Center in Anchorage – Bird TLC - began getting so many birds brought in from the Valley and there were several of their volunteers who lived up here."

Jo and Ken moved up to Big Lake from Anchorage 10 years ago. Jo, now 75, is still mushing dogs when winter weather cooperates.

"I loved the Tudor Track Trails in Anchorage," she says. While living in Anchorage, she began volunteering at Bird TLC. "I've always loved birds and animals in general. Except maybe snakes and other reptiles." She laughs.

Her involvement with care for sick and injured birds began with one bird, Mr. Robin, at Bird TLC.

"Anchorage veterinarian Dr. Jim Scott hooked me in. He is such a kind man, and had provided guidance for the group of dedicated Bird TLC volunteers for years. I worked there cleaning and helping with the injured birds. I also helped raise baby birds and really fell in love with robins."

(The five songbirds at Jo's home are still under the care of Bird TLC in Anchorage. Jo comes in to Anchorage frequently to volunteer there.)

In came Mr. Robin. "He had lost one wing, but was a beautiful bird – an incredible one, too. He became certified as an Education bird by Fish and Wildlife. I asked for and was given the privilege of being caretaker and presenter for him, taking him to schools and other community events."

Her love of Mr. Robin is still very apparent.

"He was very calm for presentations, sang beautifully every spring and helped raise many baby robins by feeding them and teaching them to be wild robins." She pauses. "He died in 2011 at the age of 12."

Besides mentioning robins, another way to make Jo's eyes shine is to mention owls.

"When we moved to Big Lake in 2010, I started volunteering for Alaska WildBird and was again cleaning and caring for injured birds here. I trained for presenting Kachina, a Short-Eared Owl missing a wing, and now do programs for AWBRC for schools and other groups," she says. "I love owl faces. They are something else!"

We are about to head off to the AWBRC clinic nearby in Houston. Jo is excited. "Wait till you see the owls there. The Great Horned Owl there is learning to sit on my fist and just look me in the eye."

When the Valley bird rehabilitation center opened 15 years ago, it was located on a resident's Cheri Lake property.

Here is where Ken's pride in these bird treatment projects becomes evident. Now 79 and a retired civil engineer, Ken has designed and worked with other volunteers on the construction of the large mews at the clinic site.

"I'm not sure how I got him hooked into helping," Jo laughs. "He's done so much – not as a presenter – but supporting us by building things. He's even vice president of our non-profit board of directors now."

"She's always putting me to work," Ken jokes, as he heads off to work on some construction detail while Jo introduces Elliott and me to the birds cared for at the clinic.

"Here's Goldie, a Harlan's Hawk," Jo says as we enter the area of the clinic's mews. "She's 25 and was a falconer's hawk before coming here, donated to us."

There's Rhett, a Red-Tailed Hawk who came to AWBRC from Georgia after being shot and not able to fly well enough to live in the wild. And then there are the owls – Tiny Tim and Skuya, both Great Horned Owls from the Valley, and Cocoa, a Saw-Whet Owl with poor vision.

"Cocoa was rescued as a fledgling with an eye condition and was at Bird TLC before she was transferred here," Jo explains.

We wonder how all this has been funded.

"Houston was very generous in granting a low cost, long-term lease for the land," Jo says. "We also are grant funded, have wonderful donors, and do a lot of fundraising events. We're all volunteers," she adds.

As we are about to leave Jo and Ken to their various projects at the clinic, I ask Jo why she does this.

"Look what I get to do," she says simply. " I get to hold a swan, look an owl in the eye, raise a baby bird. Being close to these wild birds is amazing to me. It feels really good if a bird can be rehabilitated and then let go.

"And I get to hear the robin's song in my home. They sing a soft, little song in the winter and get louder and louder, singing in the spring."

It is wonderful to think of them heading back home to their "little paradise," down the long, gravel roads and up the hill, to their house – full of spring bird song and a collection of well loved animals. 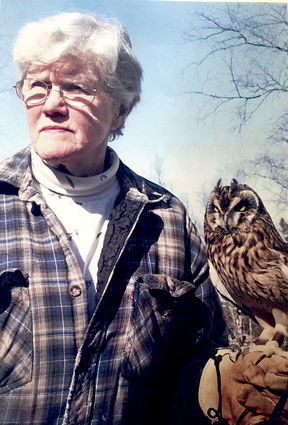 The mission of the Alaska WildBird Rehabilitation Center is to "care for injured, orphaned, and sick wild birds with the goal of returning them to the wild; and to educate the public about these birds and their habitats."

When Jo Walch was asked how many volunteers are involved, she replied, sighing, "Not enough!"

Anyone interested in volunteer training or supporting the center in any way may call 907-892-2927, or visit http://www.akwildbird.org.

Volunteers are needed for construction projects, building maintenance and cleaning, transportation, and for clinical assistance.

"There's a wonderful group of dedicated volunteers, maybe about 20, who make all this happen," says Jo. She makes special note of three "senior women, comfortable with tools," who have done much of the clinic construction work: Jill Parsons, president of the board of directors; and Nancy Wade and Sally Sonnichsen.

"And then there's Ken supervising them," she says smiling. "He's pretty particular."