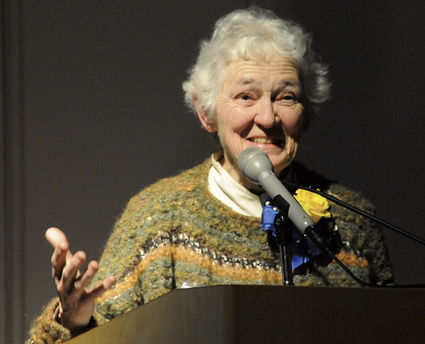 Dr. Nancy Syndam talks with loving remembrance of her time flying the Aleutians as an itinerant doctor. She spoke at the Alaska Women's Hall of Fame induction ceremony at the Anchorage Museum on March 3.

There was a generation of women who grew up without heroines, without much hope for fulfilling their wildest dreams, but then there were those women who changed all that by sheer will and determination. They thumbed their noses at "girls don't do that" and went on to do precisely what they said they would.

Dr. Nancy Elliot Syndam is one. And she was honored for that grit at the Alaska Women's Hall of Fame induction ceremony at the Anchorage Museum on March 3.

She grew up on a 60-acre farm in Lynden, Wash., where they raised Belgian horses. Lynden is the little town Alaskans pass through on Route 13 in Canada to Route 159 in the U.S. that looks like Holland.

"It is 80 percent Dutch," Syndam says. "That's why our school wouldn't let us have school dances because it was evil and movies were, too. But the school had cruises on Puget Sound and they were better than dances.

"When the boys went to work in the fishing industries they said girls couldn't go."

Attending Women's Medical College of Pennsylvania, now Drexel University-"they can't have single-sex schools any more," Syndam says ­– she knew she had to be the best she could because she would be harshly judged, compared to a man.

"There was the opinion at the time that women shouldn't be doctors," she says. "I did family practice because that's what I wanted to do and that's what I did."

She married her high school sweetheart, but not in the romantic way you might think.

"I was doing an internship at Virginia Mason in Seattle, and he had been in the Marines and was getting a job with an airline in Bellingham," she says. "Then he was transferred to Anchorage and suddenly he became very attractive."

At Virginia Mason, there was only one other woman intern, and they were housed in the nurses' room.

In 1955, she began practicing medicine in Anchorage and joined Dr. Milo Fritz in 1961 to provide medical services to villages along the Yukon River. She and her children volunteered for three months at a hospital run by the Quakers in Kenya.

She got her pilot's license at the age of 30 and in her 50s learned the cello, which was a big hit when she began to fly to villages along the Aleutian Chain, calling the tiny village of Nikolski "magical."

The cello proved to be a real conversation piece.

"People thought it was a big guitar," she says. "I'd let the children bow the strings and they loved it."

She has no idea how many babies she delivered over the length of her career, but figures it's in the thousands. Mothers still come up and show her pictures of the children she brought into the world.

Of the conditions working on the chain, she said, "No blood, no lab work, no back up.

"I got used to the weather," she says, which she described in her autobiography, "Sideways Rain."

She retired when she was 81. Sydnam is 87 now and has her own battles to face as she ages.

"Two times a week I go to the senior center and build muscle mass and strength and keep it equal," she says.

Soon she will move into an assisted living facility for a six-month try-out period. As a doctor she can well see the sign of changes in herself.

"I'm getting forgetful, so I'm going to try it out," she says. "I love my home but I know I need social interaction."

Thank you to the late inductees’ daughters and granddaughters for your moving tributes at the ceremony.