A leisurely sail to the end of Alaska 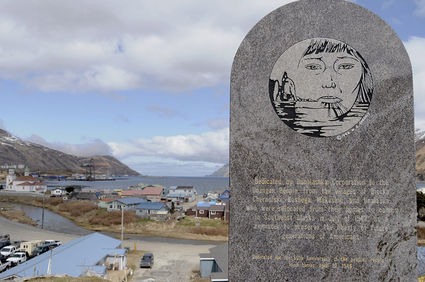 Dutch harbor's huge commercial fishing facility dwarfs the village of Unalaska below a memorial that reads, "Dedicated by the Ounalashka Corporation to the Unangan People, from the villages of Biorka, Chernofski, Kashega, Makushin, and Unalaska who were relocated from their homes to camps in Southeast Alaska in July of 1942, as a reminder to preserve the liberty of future generations of Americans." It was dedicated on the fiftieth anniversary of the people's return to their homes on April 22, 1945.

The Aleutian Chain, including Unalaska and Amaknak Islands, began about 40 million years ago when the volcanic action and movement of tectonic plates thrust up the jagged mountains to form part of the "Ring of Fire" of volcanic activity that spans the Pacific. As recently as this March, Pavlof Volcano, 166 miles north of Dutch Harbor, erupted and sent ash 20,000 feet into the air.

Dutch Harbor refers to the fishing port, while Unalaska across the bridge is home to the older village.

So many interests can be satisfied with a trip here for the person who is curious about the tail end of Alaska.

If you have never taken a ride on the Alaska Marine Highway, do it. Dutch Harbor is the southern most terminus of the ferry system. Along the way you'll stop in at Akutan, Chignik, Cold Bay, False Pass, King Cove, Kodiak, Old Harbor, Ouzinkie, Port Lions and Sand Point. So you get to ride the ferry for a long time and decompress. Have a novel you always wanted to write? Here's the time!

Discount fares are available for persons 65 and older on all sailings within Alaska and are calculated when booking online.

Stay at the Grand Aleutian Hotel, also known as the Grand Illusion, but it's a very nice hotel with great food – especially seafood-and comfy rooms with great views. Business rate is $178 a night or for personal travel it's $185.

Do not stay at Unisea, which houses mostly seafood workers and is next door to a bar. You only have to read the police blotter to understand the depth of alcoholism that goes on there. See http://www.ci.unalaska.ak.us/publicsafety/page/police-blotter.

Tour with a local

Bobbie Lekanoff, an Unalaska resident for 30-plus years, enjoys sharing her extensive knowledge of the island's community through her company The Extra Mile Tour, and can tailor tours to your interests.

Does botany intrigue you? Bobbie can show you over 120 different types of wildflower, including about a dozen species of wild orchids. Learn about the plants edible and medicinal uses. Combine it with a hiking tour - land use permit required when you land. Call her at 907-581-1859 or her cell at 907-391-6171 or at xmitours@arctic.net.

If you're a birder, Bobbie can gear a tour for you. Lapland longspur, rock ptarmigan and snow bunting breed here, and the islands are home to over 600 bald eagles. Yes, eagles are everywhere - after all it's a fishing port - but it's the Dumpsters that attract them. Watch them watch eagle-eyed as cannery workers haul bags out. It's a real come down for the national bird.

Seniors 60 and over get a $5 discount off a two-hour tour and $10 off a four-hour tour. There's a ferry special of a four to five-hour tour of $75 per person that includes stops at the Museum of the Aleutians, WWII Visitor Center and if open, inside the Russian Orthodox Church.

This is a World War II historic site, noted for being bombed by the Japanese forces killing more than 100 Americans, and within a week, Japan's Northern Area Fleet seized the islands of Adak and Kiska. It was the first time American territory had been occupied since the War of 1812.

But long before the war, the Unangan people, once called Aleut, have lived on Unalaska Island for thousands of years. After the WWII attack on Dutch harbor, many residents were arrested and resettled in camps in Southeast Alaska, and many died due to the poor conditions. 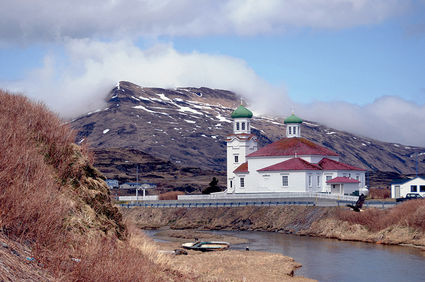 The Russian Orthodox Church of the Holy Ascension was built in 1894 on the site of an 1826 church.

The Museum of the Aleutians houses the human history of Unalaska and the Aleutian Islands Region and its people. It has over 500,000 objects, images and manuscripts of the area's history and culture. It's one of those great little museums that dot rural Alaska, and that you have to travel far to visit.

The influence of the Russians is still felt in the Russian Orthodox celebrations like Easter on May 1.

Protection of the seal trade gave rise to the U.S. Revenue Service, which guarded American interests from poachers, and eventually developed into the much-loved and revered U.S. Coast Guard.

Beginning in the 1950s, Unalaska became a center of the Alaskan king crab fishing industry, immortalized in the reality show "Deadliest Catch." By 1978 it was the largest fishing port in the United States - still is.