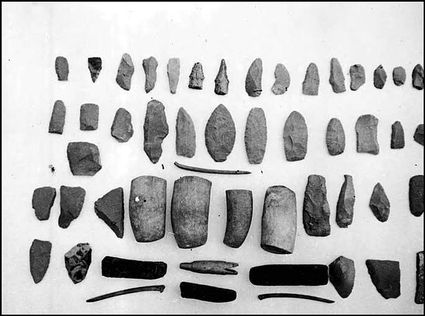 Archaeological teams dig up items like knives, scrapers, drills and points of stone and then radiocarbon date them to calculate the age of the items. This helps paint the picture of when humans arrived in an area.

Theories about how and when Alaska became inhabited with people ebb and flow like the state's rivers. Archeologists pretty much agree that Alaska's mainland was physically and ecologically a part of Asia 10,000 years ago, and that the Bering Strait was a grassy land area that separated the Bering Sea to the south and the Chukchi Sea to the north.

While the picture of who crossed the land bridge and when is still murky, the strongest hypothesis leans toward people crossing over from Asia in waves.

Some researchers suggest the first passed through Alaska and continued down to the New World. The second wave may have been what we know now as Athabaskans that settled the taiga areas. And another wave were the ancestors of our Eskimo and Aleut people. However, other researchers think there were many waves made up of small groups of people.

An archeological crew surveying potential locations for new drill sites for Arco made a significant discovery in 1983 about 35 miles northwest of Prudhoe Bay. They noticed a collapsed "pingo," which is a hill created by ice buildup, along the shore of a lake about eight miles south of Oliktok Point on the Beaufort Sea. They excavated about a foot below the sandy surface of what they learned was a fire pit. There they found burned caribou bones, tools and sophisticated weapons that radiocarbon dating showed to be 6,000 years old.

Radiocarbon dating measures the atomic half-life of biological materials, such as wood and bone, and is accurate within 5 percent. The dating on this discovery, while not the oldest site in Alaska, proved that nomadic hunters populated Alaska's far north 4,000 years before Christ.

Side-notched spear points, worked-bone tools and end scrapers used for working hides also were unearthed. But one of the most exciting finds were fragments of a prized rock – moss agate. This type of rock originated in the Livengood area, which is about 360 miles south of the arctic coast, and indicates that people may have carried and traded raw materials for tools.

Older sites of human habitation have been found in Alaska. The oldest proven sites date back 11,000 years, including one at Onion Portage, located on the Kobuk River in the northwest. Tools excavated from this area are similar to those found in Siberia. Others on the Seward Peninsula and in Interior Alaska indicate humans were there as early as 15,000 years ago.

Archaeological evidence from a site near Nikolski, a settlement on the Aleutian Chain, dates back 8,500 years, according to the Aleutian Pribilof Islands Association Website, and is the oldest continuously occupied community in the world. This area, which lies 116 air miles west of Unalaska, shows 4,000 years of continuous occupation at the Chaluka site. This means that people were there before Egyptians built their pyramids, the Mayans created their calendar and the Chinese developed written language.