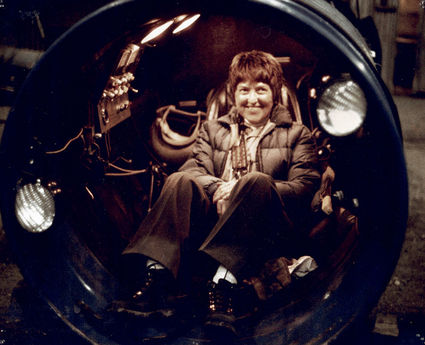 Wilma Knox crawls into a pipe for a photo during her time working on the Alaska pipeline. Knox died in 2015 but her husband, Robert Knox, has released her detailed accounts of her experiences in a book, "Four Years Below Zero."

Wilma Knox was 55 years old, and wondering if she and her husband, Robert, would have sufficient funds, facing retirement. She was also an adventurer. So instead of retiring, she took off on what she called "the adventure of a lifetime."

It was 1975, and construction of the Trans-Alaska Pipeline was just beginning. Why not head to the Arctic and take part in a project that was being compared to the building of the Panama Canal in complexity and stature?

Wilma would work on the far northern section of this mammoth project for four years. She knew there might be secretarial jobs for women on the pipeline, but that didn't interest her. Instead, she would become a security guard, working 12-hour shifts, seven days a week, at night. She kept a daily journal and wrote many letters to Robert, other family and friends far away during those four years.

Wilma died in June of 2015, just 10 days shy of her 95th birthday. Before her death she had begun to compile those memories into a book. A stroke followed by Alzheimer's disease left her unable to complete the writing. Husband Robert had promised Wilma that he would see that the book was completed and published.

I visited with Robert recently during a phone call.

Two longtime friends and neighbors of Wilma and Robert stepped up to help, Mark Andrews and Kara Naber. "We are all retired. It was a good project for us," Robert said.

The result of their efforts and a promise kept is a unique, first-person account of what one woman, holding a "man's job" on the pipeline, experienced. It's a hard-cover book of 220 pages, including eight pages of photos from Wilma's collection. Titled "Four Years Below Zero," it has been published in a limited edition of 500 copies.

The book was brought to my attention through a letter that Robert had written to OPAG, Older Persons Action Group, which publishes Senior Voice. Now living in New Mexico, he was making a generous offer of free copies of the book to Alaskans who had worked on the pipeline construction.

His letter reads, "Since publication of the book, we have distributed over 200 copies to libraries across Alaska and to the university archives, museums and historical societies. Now we would like to make copies available – without charge – to every Alaskan senior who shows that he or she worked on the pipeline job. We would like to reach some of the 1,000 women who worked on the line and also those who had jobs on the Arctic section, but as long as the copies hold out, we will send a book to any seniors who show they helped build the line."

An interesting side story relates to Robert's reason for seeking out Senior Voice to spread word of this offer. He writes, "In deciding to make this offer, I thought of OPAG and your Senior Voice publication because of my previous ties to your organization. Back in the 1970s, Rose Palmquist and the OPAG board hired me as Senior Voice editor, with the task of turning it into a statewide publication. At the same time, Wilma took of the job of securing the first advertising."

During our phone visit, Robert shared that he was uncertain of the fate of Senior Voice. It had been several decades since he'd worked for this publication. He was greatly pleased to hear that, yes, the statewide paper he helped to begin is still very much alive.

She was there, making history

The book is a frank portrayal of what it was like to be a woman on the line. Wilma openly shares her impressions of her coworkers, her working conditions, and tales of the fascinating wildlife she discovered around her at the camps. She shares feelings of bliss when witnessing some startling wonders of the Arctic landscape, and moments of deep gloom and loneliness in the dark and bitter cold of the long winters. 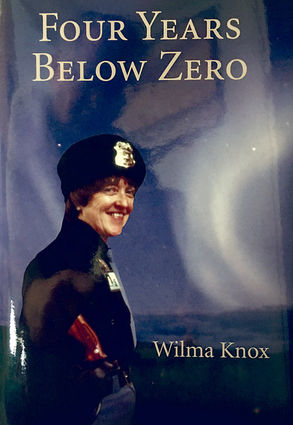 Robert Knox is offering to provide a free copy of "Four Years Below Zero," his wife's account of her days working on the Alaska pipeline, to any Alaska senior who worked on the pipeline construction.

"The book captures a little piece of history from the last century," Robert said. "In my mind, the Trans-Alaska Pipeline construction is the most important piece of Alaskan history from that century, other than statehood for Alaska. And I consider it the first big construction project where women were involved. Not much has been written in the first person about this huge project, especially by a woman. I'm really not surprised my wife wanted to be part of the immense adventure and knew her story should be told."

To receive a copy of the book, Robert asks that anyone desiring a free copy email him at fouryearsbelowzero@yahoo.com, or write to him, Robert Knox, at PO Box 1638, Deming, NM 88031.

"I'd like them to give me their name, mailing address, dates they worked on the pipeline, who they worked for, and the name of the camp or camps where they worked."

That's all that is needed, he said, adding, "We will take care of the cost of postage."