Historic Anchorage schoolhouse to be restored 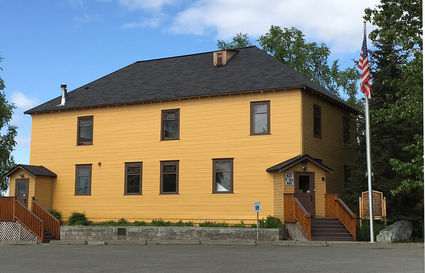 The Anchorage Woman's Club has been awarded grant money to restore Anchorage's historic Pioneer Schoolhouse. The building, now located downtown at 437 W. Third Avenue, celebrated its 100th anniversary in November 2015. It was the first schoolhouse built in Anchorage, and was moved to its current location in 1965, after standing through the 1964 Great Alaska Earthquake. It was approved for listing on the National Register of Historic Places in December, 1980, according to a May 13 press release from the Anchorage Woman's Club.

The Woman's Club manages and operates the schoolhouse in partnership with the Anchorage municipality. It is a rentable space for a variety of events including weddings, dances, group and community meetings.

Grant awards include $25,000 from the Rasmuson Foundation, $10,000 from the Atwood Foundation and a $5,000 Roger Hickel Contracting, Inc. grant to complete Phase 1 of the outside repair and painting of the building.