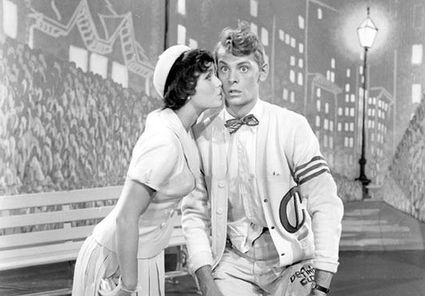 Debbie Reynolds and Carleton Carpenter perform "I Wanna be Loved by You," from "Three Little Words."

What were the chances that a 6' 3" spaghetti-thin, 18-year-old blonde actor from Bennington, Vt., could break into Broadway on his first job interview in the 1940s?

For Carleton Carpenter, after arriving in New York City in the winter of 1944, they were clearly quite good.

"Within 24 hours I had my first Broadway role in a play called 'Bright Boy,'" said Carpenter, who turns 90 in July, from his home in Warwick, NY. "The character was written as a tall, lanky blonde who wanted to be an actor. Talk about perfect casting!"

Although towering over most other actors, Carpenter's fresh, youthful appearance appealed to casting directors. And while theater was always his great love – he appeared in 10 Broadway productions – he also had roles in some 50 television and film productions.

Largely a supporting actor in movies, Carpenter left his mark on two musicals released in 1950.

In 'Three Little Words,' he appears in a memorable musical number with Debbie Reynolds – "I Wanna be Loved by You" – never speaking or singing a word. It was an odd coupling, with Reynolds over a foot shorter than Carpenter.

"I guess they just liked the look of the two of us together," he said.

The same year, Reynolds and Carpenter appeared in "Two Weeks with Love," although Jane Powell and Ricardo Montalban were the leads. Nevertheless, the vertically mismatched couple again stole the show with their musical highlight "Aba Daba Honeymoon," a catchy novelty song.

"We were rehearsing and I spotted the song in a pile of old sheet music on the piano," recalled Carpenter. "I played it for Debbie and we liked it. When I saw Jack Cummings, the producer, walking towards the rehearsal hall, I told Debbie to sing the lyrics very fast. He agreed it would be a good number for the two of us."

Carpenter's first leading role was in MGM's "Fearless Fagan," in 1952.

"It was loosely based on a true story about a guy who was drafted into the army and tried to take his pet lion named Fagan with him," explained Carpenter. "I had a lion for a co-star, but it was my first star billing – you just go with it."

While publicity posters promoted the film with headlines such as "Janet Leigh, Carleton Carpenter, Keenan Wynn and introducing Fearless Fagan (himself)," Carpenter says the real Fagan made only one brief appearance at the beginning of the film. 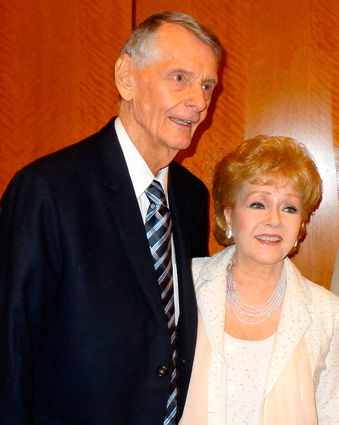 Debbie Reynolds and Carleton Carpenter reunite at Cinecon 48 in 2012.

"He had a double," laughed Carpenter. "Fagan and I worked on the MGM lot for a month getting used to each other, but he was old. By the time we started filming, his trainer was worried he might hurt someone. The studio brought in a young lion and he was like a pussy cat. I crawled into bed with him, we wrestled, and I did every scene with him. I had padding under my uniform and around my arms, but occasionally he would nip my rump."

Janet Leigh, however, wasn't impressed with her four-legged co-star.

"Poor Janet was just terrified," said Carpenter. "But she was well protected. Off camera, the crew were watching with loaded guns just in case."

Aside from acting, Carpenter is a songwriter and author. His mystery novels have been reissued in paperback, and signed copies are available for $10 directly from the author (write PO Box 844, Warwick, NY 10990).